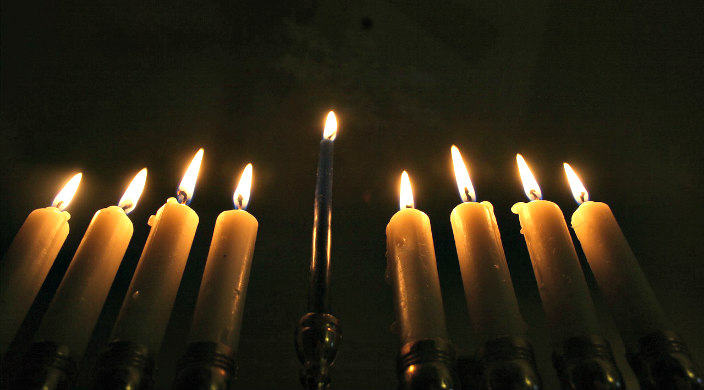 Every Hanukkah, we thank God for the miracle of the season. But what was the miracle? Simply this: The Maccabees and their legacy survived.

This is a miracle, you ask? The parting of the Red Sea – now that was a miracle! The manna from heaven? That was a miracle, too. Granted, Jewish survival is a great accomplishment, given our history of persecution. But why single out this one event and celebrate it for eight days every year?

We celebrate because our ancestors not only won a great military victory, they came up with the quintessential Jewish survival strategy. Of the many ancient peoples that went up against Greek civilization – the Edomites, the Phoenicians, the ancient Egyptians – Jews alone have lived to tell the tale.

These other nations couldn’t compete because Greek culture was all the rage – sophisticated, attractive, exceling in the arts and sports. They had the Olympics. Travel and trade opportunities abounded. Big business flourished.

And this very cosmopolitan society was willing to accept outsiders. Many Jews, tempted by the “in” society, reasoned, “We're not really all that different. Sure, we believe in one God, and they believe in many. So not to be rude at the opening of sports events, couldn’t we just pray to one of their gods at a time?”

When more traditionally minded religious Jews rose up in protest, the assimilationists called in the Greek authorities to intervene. That was a colossal mistake. King Antiochus Epiphanes IV seized the opportunity to outlaw the practice of Judaism altogether, and he installed statues of Zeus and himself in the Jerusalem Temple.

With the defiled Temple out of service, Jewish festivals went unobserved – even the great festival of Sukkot, when Jewish farmers offered praise and gratitude to God for a good harvest. Not only was this an agricultural gamble, it was an affront to the Almighty!

And that’s when it happened. In the small village of Modi’in, the Maccabean elder Mattathias caught sight of a Jew bowing down to an idol and struck him dead, setting off the revolt against the Greeks. Using guerilla tactics, the outnumbered farmer-warriors, led by Mattathias’ son Judah, defeated the Greeks and restored the Temple.

In the revolt’s aftermath, the Maccabees established a dynasty that would last for more than 100 years. Secure in their independence, these Hasmonean kings, as they were called, adopted Greek-style names, and their Jewish subjects followed suit, once again imitating the Greeks.

This time, however, imitation did not threaten, but rather ensured Jewish survival.

To celebrate their military triumph, the Jews and added a new, eight-day festival in Kislev. The very notion of creating a religious holiday to commemorate a military victory was a Greek idea (heretofore, all Jewish festivals were commanded in the Torah). Other Greek ideas that crept into Jewish thought included notions of the afterlife and a “soul.”

You might ask: If the Maccabees, those bulwarks against assimilation, succumbed to Greek styles and influence, how were they any different from the pro-Greek Jews they had once so violently opposed?

The Maccabees were Jews first, and thus, they were highly selective in determining which traditions were essential. In contrast, the assimilationists knew no boundaries; they would have traded Zeus for God and trophies for circumcision, discarding the ancient mark of the covenant of our people.

The genius of the Maccabees in their response to Hellenism was in hewing to a narrow path between the twin perils of assimilation on the one hand and isolation on the other. This approach of preserving what makes Jewish identity unique while engaging with the majority culture would become the foundational model of Reform Judaism.

This balancing act is the secret of Jewish survival, and its sanctification as a religious festival is the miracle of Hanukkah.

That’s why some cultural borrowing from our neighbors may actually be in line with the message of Hanukkah – so long as it is an accommodation made in the context of Jewish affirmation, rather than a blurring of boundaries that may lead to the dissolution of our identity as a distinct minority.

We affirm our Jewish distinctiveness anew every time the Hanukkah candles glow in our dorm rooms and our dwelling places, our synagogues, and our souls. This is, indeed, an ongoing miracle: the light of Jewish life still shining after all of these centuries.