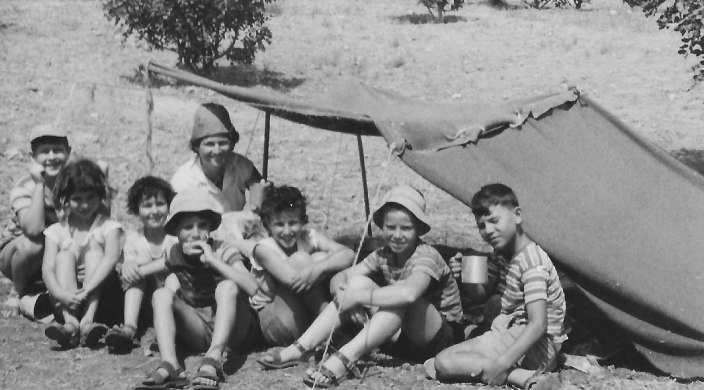 What was it like to grow up in a communal children’s house on an Israeli kibbutz? Rachel Biale was born in 1952 and raised on Kibbutz Kfar Ruppin, overlooking the Jordan River. She is the author of the new memoir Growing Up Below Sea Level: A Kibbutz Childhood (Mandel Vilar Press).

Rachel, who earned her MSW in social work from Yeshiva University, has worked as a therapist specializing in families and young children for more than 30 years. She has written several other books, including Women and Jewish Law (Schocken, 1984) and What Now? 2-Minute Tips for Solving Common Parenting Challenges (Koehler Books).

I spoke with Rachel about her childhood experiences and how they informed her thinking about raising resilient children today.

ReformJudaism.org: At the age of 8, you were entrusted with herding 100 dairy cows from the grazing pasture back to the kibbutz for milking. What went through your mind?

Rachel Biale: I felt a combination of panic and pride. I wasn't very big or strong, and many things could have gone wrong. Luckily, none did!

As a parent looking back at that experience, I find it hard to believe that adults would expose children to that level of risk and put that much trust in their competence.

What was the thinking behind the decision to raise children collectively rather than have them live with their parents?

This system arose in 1920s out of a combination of a necessity and ideology. Here is a group of young adult pioneers with no grandparents around, who are having babies but not a clue about to how to raise them, so they adopted the communal system and sent some people to be trained in childcare.

They also were heavily influenced by Freudian psychology, believing that neurosis was rooted in how children related to parents in traditional, bourgeois nuclear families.

How did that ideology translate into your lived experience in the children’s house with ten others your age?

I felt empowered and free, but that is not how everyone experienced it. There's a whole genre of “kibbutz survivors,” books about kids who were quite traumatized. My experience was much more positive, yet not uniformly so.

Sometimes I felt constricted, having to subjugate my personal desires and natural tendency to dominate. I felt compelled to hold back in order to allow less forceful kids in my group to assert themselves.

How was Jewish tradition observed at your kibbutz?

Ours was a transformed concept of Judaism that imagined a biblical, pre-diaspora Jewish religion grounded in agriculture instead of theology. For instance, we celebrated Shavuot, Sukkot, and Passover purely as harvest festivals. Belief in God was completely rejected on our secular kibbutz.

Did you celebrate becoming a bat mitzvah?

Yes. Each person in our class had to perform 12 tasks, which fell into two main categories.

The first was doing things that adults would do, because in the kibbutz context, that's what coming of age was all about. These tasks might include working a full day in one of the kibbutz branches, being on all-night watch duty, or teaching a first-grade class for two hours.

A second set of tasks, designed to stretch the limits of our comfort zones, had to be completed outside of the kibbutz. For example, shopping alone in the city of Haifa was an extremely challenging experience because I had never gone into a store by myself to buy anything.

My list also included spending Shabbat on a nearby religious kibbutz. That was the first time I'd been in the synagogue and experienced a Kabbalat Shabbat service and Shabbat blessing, like candle-lighting and challah blessings, and the Birkat HaMazon (the blessing a meal). I felt a tinge of envy because the Shabbat service was such a beautiful, communal gathering. In my kibbutz, someone lit candles, said, “Shabbat Shalom,” and it was time to eat.

My religious kibbutz experience was going very well until the evening discussion group, when I blurted out, “It's obvious that there is no God, so this discussion is meaningless.” That was my way of asserting that our kibbutz’s ideology was superior to theirs because we knew the truth: There is no God, and religion is “the opium of the masses.” Voicing sacrilegious thoughts in front of a group of religious 12-year-olds did not go over well.

You describe your kibbutz wedding as an “unusual blend.” How so?

Typically, our kibbutz would bring in a rabbi, who would mumble the service under the chuppah (wedding canopy) as quickly as possible. Nobody paid any attention until they could yell “Mazal tov,” sing a few songs, and then proceed to the dining hall for a festive dinner.

During the two and a half years preceding my wedding, I went through a kind of a Jewish awakening. I joined a group of kibbutzniks to study with several rabbis once a month in Jerusalem; my future husband, David Biale, had been on a similar path in California. We decided to have a traditional Jewish wedding that might be more meaningful to the kibbutzniks.

I asked my teacher to perform the wedding in a way that explained each of the rituals. It was the first time people sat down and actually listened and understood the ceremony.

To what extent does your kibbutz experience inform your thinking about what children need to thrive?

For much of my childhood, we were left unsupervised. Now, as a mother and grandmother, I shudder at the thought of what might have happened to us. That said, I believe it is a good thing to allow children some unsupervised time to help them develop a sense of agency and responsibility.

In my therapeutic work, I try to help parents think about times and situations when they can give children opportunities to be more on their own. I have a lot of concerns about the “helicopter parenting” style, because it robs children of the opportunity to learn from mistakes and failures. The ability to mobilize one’s inner resources and move forward is an essential part of child development.

END_OF_DOCUMENT_TOKEN_TO_BE_REPLACED

Both Arab and Jewish, young and old, the women of "Cinema Sabaya" learn about much more than filmmaking during the class; they discover that their differences are far outweighed by their bonds as women making their way in a patriarchal world.
Israel
Image