My History with the Family of Lee Harvey Oswald's Jewish Killer 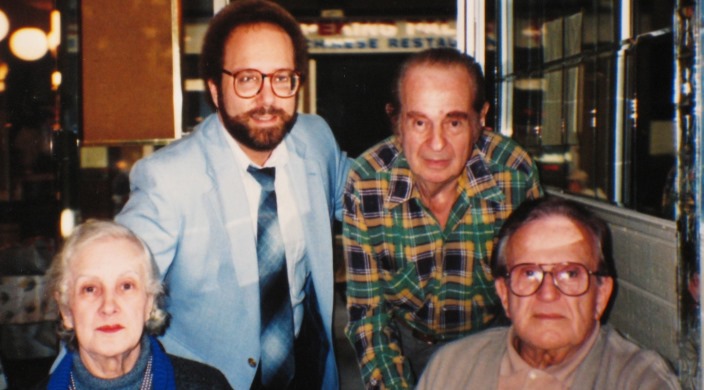 We were sharing a pastrami sandwich and pickles at the Los Angeles landmark Canter’s Deli. I was 24. She was nearly 50 years older, with a piercing voice as loud as her flaming red wig.

Her name was Eva Rubenstein Grant, and she was a little-known nightclub manager the morning of Nov. 24, 1963, when her brother left the apartment they shared in Dallas and blasted his way into infamy by fatally shooting Lee Harvey Oswald. It was history’s first live televised murder.

Eva worked and lived with Jack Ruby and spent the rest of her life defending him against various allegations.

“I swear on my life, my brother was not three things,” Eva told me, her voice rising. “He was not a homosexual. He was not with the communists. And certainly not with the underworld.”

I listened with fascination to Eva that day in 1977. (Years later she was perfectly portrayed in a TV movie by Doris Roberts, the high-decibel mom on Everybody Loves Raymond. She died in November 1992 at 83.)

“But Mrs. Grant,” I said. “Jack had ties to the ‘syndicate,' as you call it, as far back as your childhood in Chicago.”

“Look,” she replied in exasperation. “We would see these people in the neighborhood and we’d ask, how’s your mother? How’s your sister? But that doesn’t mean Jack was connected with them. I grew up with a bunch of boys who turned out to be no good. Who knew?”

It was a quintessentially Jewish response, albeit delivered in Eva’s hybrid Chicago-Dallas accent. And the Rubensteins were a staunchly Jewish family, a fact that may have played a role in Ruby’s killing of Oswald, President John F. Kennedy’s assassin.

Ruby was born Jacob Rubenstein in 1911 to a family of Polish-Jewish immigrants. His parents, Joseph and Fannie, were a volatile couple. Joseph was a mean and abusive drunk. Fannie suffered from mental illness and at one point was committed to an Illinois state hospital.

Their eight children had their fair share of problems, both before and after the parents separated. Ruby and three of his siblings were made wards of Chicago’s Jewish Home Finding Society and placed in foster homes for periods of time during the 1920s.

Despite their dysfunctional world, the Rubensteins kept a kosher home, observed the holidays, sent their boys to Hebrew school and attended synagogue.

Ruby idolized Chicago Jewish boxing champion Barney Ross, who later described him as a “well-behaved” youth. But others recall Ruby's hair-trigger temper and street brawls, especially when he was on the receiving end of ethnic bullying in his mixed Jewish-Italian neighborhood. Ruby's biographer, Seth Kantor, relates that as an Air Force private, Ruby once beat up a sergeant who called him “a Jew bastard.”

After World War II, Eva moved to Dallas and began managing nightclubs and restaurants. Ruby received an honorable discharge from the Air Force in 1946 and joined Eva a year later in Texas. It was in 1947 that Jack, along with brothers Earl and Sam, legally changed his last name to Ruby.

As a young man in Chicago, Ruby reportedly ran errands for Al Capone’s cousin and henchman Frank Nitti. A former Dallas sheriff once testified that Chicago mafia figures told him that Ruby was sent to Texas to run nightclubs that were fronts for illegal gambling operations.

According to evidence uncovered by the U.S. House of Representatives Assassinations Committee in the 1970s, Ruby was later linked to mobsters Carlos Marcello and Santos Traficante, who the panel considered prime suspects in a possible mob conspiracy to assassinate Kennedy.

Whatever he was doing behind the scenes, Ruby became known as a nightclub owner and at some point began attending services at Congregation Shearith Israel. Rabbi Hillel Silverman, who was the Dallas synagogue’s spiritual leader from 1954 to 1964, says Ruby came to say Kaddish for his father.

“He came to minyan one day with a cast on his arm,” Silverman recalled. “I said, ‘Jack, what happened?’ He said, ‘In my club, somebody was very raucous, and I was the bouncer.’ ”

Silverman, now 89 and still leading High Holy Days services every year, remembers Ruby well. Once Ruby showed up at the rabbi's house with a litter of puppies and insisted the rabbi take one. When the family went to Israel one summer, Ruby looked after the dog.

“The day of the assassination, we had our regular Friday night service, which became a memorial service for the president,” Silverman said. “Jack was there. People were either irate or in tears, and Jack was neither. He came over and said, ‘Good Shabbos, rabbi. Thank you for visiting my sister Eva in the hospital last week.’ I thought that was rather peculiar.”

Two days later, Silverman spoke to his Sunday morning confirmation class, expressing relief to the students that Lee Harvey Oswald was not Jewish or there might have been a “pogrom” in Dallas. He then switched on the radio and heard that a “Jack Rubenstein” had killed the assassin.

I interrupted Silverman, pointing out that other reports had Ruby saying he did it “to show that Jews had guts.” The rabbi sighed.

“Yes, he mentioned that,” Silverman said. “But I don’t like to mention it. I think he said, ‘I did it for the Jewish people.' But I’ve tried to wipe that statement from my mind.”

Another person close to Ruby who tried, unsuccessfully, to block out the past is his nephew, “Craig” Ruby. (He asked that I not publish his real first name). His early memories are pleasant: Uncle Jack having a shot of whiskey with Craig's father, doling out silver dollars to the kids, his flashy sports cars.

Like millions of Americans, Craig watched Oswald's murder live on television. Soon afterward, he and his mother heard the name of the gunman.

“Did you ever hear the expression ‘The color drained from her face?’ I literally saw my mother’s face go from flesh to green,” he recalled. “At age 12, that was a little freaky to watch.”

Half a century after the fact, Craig is still bitter over the dramatic effect his childless uncle’s act had on the extended family, including bomb threats and huge legal bills. Given his last name, Craig was an easy target for bullies during his junior high school years in Dallas. But worst of all was facing Uncle Jack himself.

“One Sunday my dad insisted we go to see Jack in jail,” Craig said. “Outside, a police car’s siren started up, and my uncle was standing there with this incredibly intense, wild-eyed look on his face, and he yelled, ‘You hear that? You hear that? They’re torturing Jews in the basement!’ That particular experience was traumatic enough to where talking about it right now, 50 years later, is turning my gut into a knot.”

“In prison, he deteriorated psychologically," the rabbi said. "One time I walked in and he said, ‘Come on, rabbi, duck underneath the table. They’re pouring oil on the Jews and setting it on fire.’ He was quite psychotic.”

My initial connection to the Ruby family was through Eva, who I convinced to appear on ABC’s “Good Night America” program in 1976. Later I visited her several times at her apartment in Los Angeles, where she once gave me the last piece of stationary from Jack’s Carousel Club.

She introduced me to her brothers -- Earl, who owned a dry cleaning store in Detroit, and Sam, who lived in the Los Angeles suburb of Sylmar. Sam showed me the one picture he had of their immigrant parents as well as the rusting car Jack drove to the Dallas police station the morning he shot Oswald.

In 1991, Earl allowed me to rendezvous with him in Dallas on the day he retrieved Jack’s gun, which he won after a decades-long legal battle. I later showed the weapon on television for the first time since 1963, shortly before it was auctioned off for $220,000.

The brothers also downplayed Jack’s ties to the mob. Sam, who died in 2006 at age 90, leaned in close and lowered his voice, confiding: “These guys would come into Jack’s club, and you had to be nice to them, ya know.”

Ironically, when Earl chose a place for us to meet in Dallas the day he was given Jack's gun, he picked an Italian restaurant better known for its links to the Mafia than its lasagna.

Some conspiracy theorists believe Ruby was ordered to silence Oswald by his organized crime contacts. Others, who think the murder was an impulsive act, point to Ruby’s fury over an anti-Kennedy advertisement in a Dallas newspaper the morning of the president’s visit. It was paid for by a right-wing Jewish activist named Bernard Weissman, which Ruby thought put Jews in a bad light.

We will never know for sure. What Craig Ruby knows for certain is that he did not mourn his uncle’s death from cancer in 1967. His family had moved to Chicago by then and when he saw the headline announcing Ruby's death, he felt like a weight had lifted.

As for having a connection to one of the darkest moments in American history, Craig Ruby’s view has not changed in 50 years.

“I wish to God it hadn’t happened to us.”

Steve North is a broadcast journalist with CBS News who’s been reporting on the Kennedy assassination since 1976.