My One-Woman Musical Is Inspired by My Grandparents’ Bravery 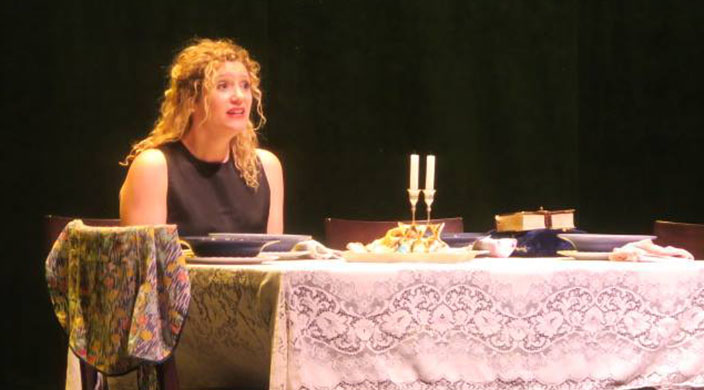 How do we become our truest selves?

As the granddaughter of two remarkable partisan resistance fighters who survived the Holocaust fighting Nazis in the forests of Poland and Belarus, I have always struggled with this question. This legacy, so large and all-encompassing, often makes me wonder if who I am is enough and whether or not I am living up to my truest self.

In my mind, the past and present have always been intertwined, and I know the same is true for many Holocaust survivors and their descendants. The question of how to continue to move forward while also honoring the past is one I ask myself daily.

"Bubby’s Kitchen" is how I answer this question. It’s my one-woman musical inspired by my grandparents’ heroic actions of resistance, bravery, and sheer will to live and tells the story of my struggle to live up to their incredible legacy.

I originally wrote and performed the show in partial fulfillment of my cantorial ordination from Hebrew Union College-Jewish Institute of Religion, the Reform seminary. In the 10 years since, I have performed “Bubby’s Kitchen” for more than 10,000 people in more than 25 communities across North America, including at such venues as the Museum of Jewish Heritage – a Living Memorial to the Holocaust and the JCC, both in New York, NY, as well as at Seattle’s Kirkland Performing Arts Center, Temple Emanuel of in Dallas, TX, and Proctors Theatre in Schenectady, NY, among others.

As audience members come with me on a journey of discovering what it means to be a living legacy of the partisans while staying true to my own desires and destiny, they confront the question of how we – individually and collectively – choose to move forward from the past to the present.

Six million is a number that Jews instantly recognize. Six million lives stolen, 6,000,000 souls murdered, each a life force, each with contributions to make to the world that will never be realized. Thirty thousand is a number fewer might recognize, but it is the approximate number of Jews who came out of the forests at the end of World War II. Among them were my grandparents, Judith and Marvin (z”l) Ginsburg, who fought with the Raschinsky, Bielski and Iskra partisan units during the course of the war.

My zayde (grandfather in Yiddish) blew up 17 trains loaded with Nazi soldiers and war materials. Together with his younger brother Tzalke (z”l), he also destroyed several bridges, as well as a hydroelectric plant and factory complex. He was decorated by the Soviet Union with its highest honors, including the Order of Lenin, the Red Star, and many other military medals and commendations.

In 1943, as shots were being fired at my 17-year-old bubby (grandmother in Yiddish), she escaped from the line of Jews being marched to the trains bound for the Majdanek concentration camp. Rescued by a Polish man, she joined the Raschinsky otriad (Russian for a partisan detachment), where she served as an active combatant, partaking in numerous battles against the Germans. At the age of 18, she was commended by her commander for her bravery and steadfastness.

My bubby was the only survivor of a large and well-respected family of four sisters, one brother, many aunts, uncles, cousins, and grandparents – a family that mirrors the beautiful and large family of four children, 10 grandchildren, and 13 (at last count) great-grandchildren she and my zayde created in Troy, NY, after the war.

Against the backdrop of the Holocaust and modern-day America, “Bubby’s Kitchen” explores the themes of Jewish identity, family legacy, self-identity, and the personal synthesis of Jewish history – not only because I need to explore them to stay true to my own journey, but also because we all need to confront the past as a way to move forward and thrive as a Jewish people.

As a cantor, I have the unique opportunity to help people explore their own Jewish identities and connections to past, present, and future generations. Through “Bubby’s Kitchen,” I show people my own profoundly personal experiences and demonstrate how I synthesize past with present –all in the hopes that they then can do the same in their own lives. Sometimes joyful, sometimes heartbreaking, often funny and always true, the show is my struggle toward self-realization and self-actualization.

The penultimate song in “Bubby’s Kitchen,” titled "Who Am I?" fittingly asks, Who am I to tell the remarkable story of my grandparents? Who am I to carry on their legacy? Although I may not ever know if I am enough, I am certain that telling this story is the surest path to becoming my truest self.

For more information about this never-ending journey of self-discovery, including how you can bring it to your community, visit "Bubby’s Kitchen."

Cantor Shira Ginsburg has served for 14 years as the cantor of East End Temple in New York, NY. The creator, playwright and perfomer of “Bubby’s Kitchen,” Shira has performed on stages all over the world. In 2019, Shira was honored by the Jewish Partisans Educational Foundation for her commitment to carrying on her grandparents’ lessons and legacies.