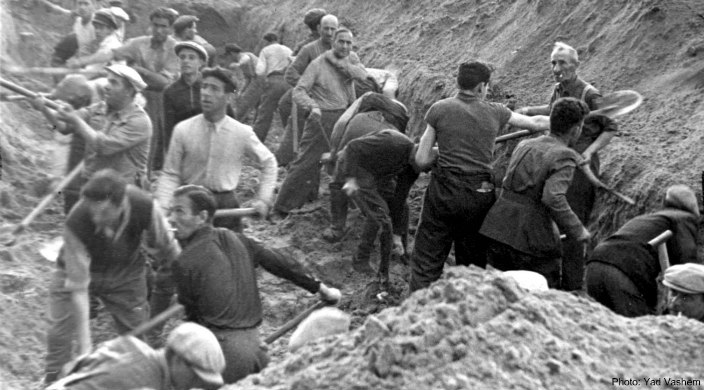 “NOVA”’s terrific new one-hour film, “Holocaust Escape Tunnel,” is a reminder that in an era of alternative facts, science and history still can separate fact from fiction. The documentary explores the near destruction of one of the most important Jewish communities in history.

Prior to World War II, Jews comprised half the population of Vilnius, Lithuania, known in Yiddish as Vilna. Through a combination of survivor and descendant accounts, interviews with historians, archival films, and the findings of an international team of archeologists led by Dr. Richard Freund and Dr. Jon Seligman, the program lays bare what happened to the Jews of Vilna and the secrets beneath the Ponar Forest, located less than five miles from present-day Vilnius.

We learn that before the Holocaust and postwar Soviet occupation, Vilna was known as “the Jerusalem of the North,” for its reputation as a great center of Jewish learning, home of 100 synagogues, the largest Jewish library in the world, and six Jewish newspapers.

Historians point to Vilna as ground zero for the Final Solution. In the summer of 1941, the Jews of Vilna were forced into ghettos, sometimes sleeping 50 to an apartment, while family members were transported to the nearby forest, never to be heard from again. As one survivor puts it, “you go to Ponar to die. Nobody comes out alive.” At Ponar, we’re told the Nazis enlisted a rifle squad of 150 Lithuanians to shoot Jewish citizens and dispose of the bodies in massive pits. We’re told that this marked the turning point from deporting to annihilating Jews.

The forest of Ponar becomes a disquieting figure in the film, as the archeologists attempt to locate the infamous pits and other signs of mass graves. We can hear trains running nearby on the same tracks that brought people there. We’re introduced to the non-invasive archaeological methods used to verify the atrocities, mostly sub-surface geophysical mapping and ground penetrating radar. Mass graves are identified by their right-angled edges on a readout, not by any physical remains. The only digging we witness is in Vilnius itself, as Seligman and American volunteers try to unearth remains of the mikveh (Jewish ritual bath) of the once great Synagogue of Vilna.

About halfway through the film, the team begins to search for “the tunnel.” Fearing defeat, the Nazis set out to destroy evidence of their crimes by ordering a select group of captives, including  76 Jewish men and four Jewish women to unearth and burn the bodies of the 70,000 Jews murdered at Ponar. To avoid the same fate as the earlier victims, the 80 captives devised an escape plan: digging a 100-foot tunnel to freedom.

As one descendant describes it, he just wants proof that the stories his father told him about the tunnel are true. He wants closure. The pace of the documentary quickens as the archeologists race against time to find evidence of the tunnel and where it emptied out into the woods.

“NOVA: Holocaust Escape Tunnel,” which relies on many television tropes to add tension and suspense to this historic event, at times feels a bit like an episode of “Bones” or “Unsolved Mysteries.” It remains grounded, though, by the weighty, heartbreaking testimony of survivors and their children. One survivor tells us of his last memories of his father, who snuck him out through the camp gates in a sack on his back. He recalls feeling the press of his father’s warm body, before being told to “run.” He never saw his father again, but still expresses gratitude for having had those last moments together.

Verifying the survivors’ accounts that the tunnel existed becomes an act of defiance against those who deny or minimize the Holocaust. More than 95 percent of Lithuania’s Jews were killed. The Nazis tried to hide these atrocities, and the Soviets literally paved them over. As the witnesses pass into history, time can become the enemy of truth. But with radar images of the tunnel and mass graves now part of the historical record, what lies just beneath Ponar’s surface cannot be denied – now or ever.