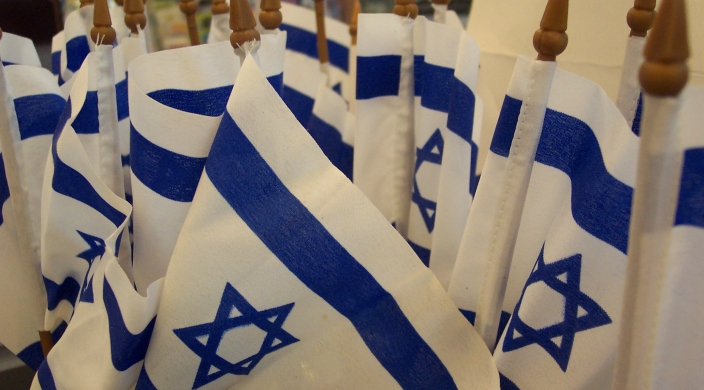 I sense the existence of one Am Yisrael – one Jewish people – on Yom HaShoah (Holocaust Remembrance Day).

It's a difficult day for the Jewish people (as I hope it is a difficult day for most people, regardless of religion) for obvious reasons. There's a unifying quiet, not a lot of divisiveness on Yom HaShoah; most Jews aren't arguing politics on Yom HaShoah; Jews from the left to the right and everything in between feel the weight of this day together. Whether knowledgeable of the Kabbalistic tzom shtikah (fast of silence) that so many communities practice in some way on this day, or simply sensing the pressing need for silence because the utterance of words seems a betrayal of so much; whether their own family members were murdered or whether their family never rooted itself in Europe and so remained untouched from the Shoah's flames; whether observant or not, whether Jew by choice or Jew by birth, Jew and Jew co-exist together this day; Jew and Jew remember together this day – whether it is me, the liberal, pro-Israel, pro-peace, egalitarian, humanitarian, Reform rabbi writing this on my iPad in my office, or the extremist Haredi Jew who throws stones at an 8-year-old girl in Beit Shemesh, or the vociferous anti-Israel Jew who uses his popularity platform to call for an end to the so-called "oppressor." And although I don't know for sure how they feel, I imagine that to both the stone-thrower and the Israel-denier, I am anathema; certainly, the actions of the stone thrower and Israel denier are anathema to me! And yet, for me, on this day, the stone-thrower and Israel-denier and I, like it or not, are brothers and sister in Am Yisrael, and we bear our pain together.

Many may not like what I just said. To tell you the truth, after Yom HaShoah, I will have a harder time stomaching my statement, as well. But I wonder if that is not one of the challenges of the day? In our obligation, we are called to remember the horrific events of the Shoah and, in doing so, assure it never happens again. Perhaps part of that beckons us to look at ourselves, this once-remnant of a people now spanning through Diaspora and Israel, with practices and beliefs ranging across a wide expanse, still as one Am Yisrael. Part of that self-examination mandates understanding ourselves as part of the larger whole, who, even in disagreement, sometimes vehement disagreement, with each other, still understand themselves as one entity. Isn't that how we really assure Emil Fackenheim's suggested 614th commandment, to not give Hitler posthumous victory? For when we separate ourselves from each other, to proudly proclaim "I am not like them! They are not a part of me!" we deny the truth that we all know deeply, anytime we feel collective pain when another Jew fails. It is why I didn't just feel anger when I heard about the stone-thrower and encountered the Israel-denier; it is why I felt shame and sadness, too. The truth is we are all – no matter how far apart we might seem geographically or ideologically – part of each other.

Yom HaShoah falls in between Pesach and Shavuot, along our journey from redemption to revelation with the giving and receiving of Torah. I take to heart what Torah teaches: Not one of us was excluded in receiving it. I wonder if I might have been standing next the stone-thrower and denier that day? I wonder if we brushed shoulders with each other in the crowd; if they made enough space for me and if I made enough space for them? I wonder if we caught a glimpse of each other's faces and saw in the other the image of God?

And then I wonder how today, so seemingly far from Sinai, we might see that in each other once more?

I find guidance from two teachings about a different pilgrimage festival, Sukkot. I use these teachings in moments when I need to be reminded of these goals, and I will use them when Yom HaShoah is over.

The first is from Pesichta Rabbati 51:2:

The second is from Yalkut Shimoni 188a:

Just as one cannot fulfill their obligation on Sukkot unless all four species are bound together, so Israel can only be redeemed when all Israel holds (themselves) together.

None of this is to excuse personal accountability; none of this is intended to suggest that we ignore or stand silent when anyone commits an act of violence or hate, especially our brothers and sisters. But in each of our own turning and returning to the best of who we can and are meant to be, we have to remember that all of us were there from the beginning and all of us are on this journey – the stone-thrower, the Israel-denier, you, and me, all of us – together.

Rabbi Wendi Geffen serves as one of the rabbis at North Shore Congregation Israel in Glencoe, IL, and sees her mission as one to bring the deep wisdom tradition of Judaism to benefit the lives of people of all backgrounds, the community, and by extension the world.