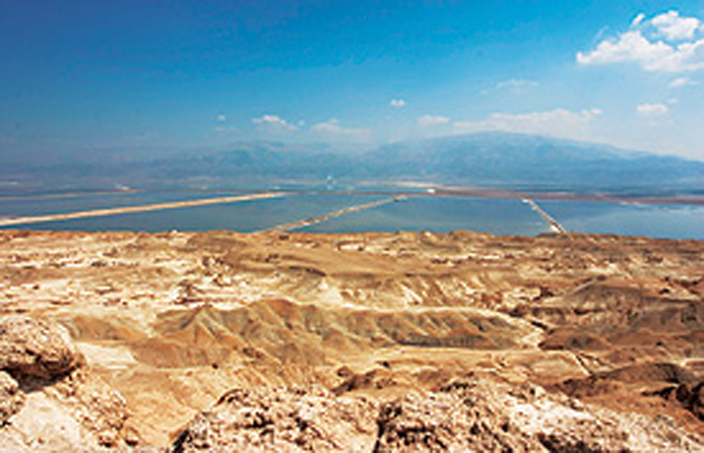 The Dead Sea has been a source of fascination for thousands of years. Genesis makes mention of the "Salt Sea," and the Greek philosopher Aristotle (384-322 B.C.E.) wrote of this "very bitter and salty water in which no fish can live and where neither man nor animal can sink."

Yet this "lifeless body of water" has also been venerated since antiquity for its life-giving healing powers. The Dead Sea waters consist of twenty-one different minerals; twelve of which are found in no other natural body of water anywhere on earth. Legend has it that Queen Cleopatra used medicine derived from Dead Sea compounds to cure her ills. According to the historian Josephus Flavius (37-c.100 C.E.), King Herod found relief for his aching body in the area's hot springs. So too did conquering Roman soldiers in many parts of the Roman Empire, who used the highly concentrated magnesium and calcium from Dead Sea waters as a balm to soothe their aches and pains.

When modern Israel was founded, the Dead Sea once again became a destination dedicated to health and wellness. It was also a haven for people suffering from respiratory ailments (more than 400 meters below sea level, the Dead Sea area has 5-6% more oxygen than anywhere else in the world). It was to Hamei Zohar-the first spa established there, in the early 1950s-that the Israel Ministry of Defense sent injured soldiers for relaxation and rehabilitation. Later a few hotels opened with in-house spas, including massages, sulfur baths, and indoor pools.

In the mid-1980s the emphasis changed from treating disease to stress reduction, cosmetic treatments, and massage therapy. Today thirteen hotels offer in-house spas with unique personal-care services. Their major emphasis is to help visitors maintain a healthy mind in a healthy body while having a grand, relaxing, even indulgent time in one of the world's most unique tourism destinations.

My wife Adi and I experienced about five massages each along with other treatments during our four-day stay at the Dead Sea. The luxurious Le Méridien Dead Sea Hotel offers a full range of fine spa treatments; we selected the couples massage, appropriately named "Seventh Heaven," a tandem massage followed by a "Cleopatra's Milk" bubbling whirlpool bath at the Gallery Spa, a genteel spa-within-a-spa. Our two masseuses, Larisa and Yulia, massaged us in harmonious movements and in classic style on parallel beds for seventy-five minutes in silence, except for the almost imperceptible ocean sounds on a CD. We both felt at one with the universe, and with each other. At the massages' end, the practitioners brought us two glasses of water and filled our "Gallery" room Jacuzzi with goats-milk concentrate. It is said that the Egyptian queen soaked in baths of fresh milk; and we know from modern science that the lactic acid in milk can cleanse even the deepest layers of skin. After twenty blissful minutes a knock on the door signaled us to shower and return to the everyday world, though not before a visit to the Gallery relaxation room, where we sipped herbal tea and indulged in sinfully delicious cookies.

Visitors wishing to enjoy Le Méridien's public facilities but pay less can book a room at its sister hotel, the Tulip Inn, a couple hundred yards away. (Both are managed by Fattal Hotels) Recently upgraded and rebranded, the Tulip Inn is a real budget find, offering its own dining room, swimming pool, and expanses of lawn-a welcome sight by the Dead Sea.

The nearby Hod Hotel was built nearly twenty years ago, but you'd never guess it, judging by its meticulous upkeep. It's not as luxurious as the Le Méridien, but you can step out of the elevator on the spa level and walk out to the sea. Guests do not pay for admission to the spa or for the use of most spa facilities, so the ambience tends to be more folksy, informal, and energetic than that of Le Méridien, which charges a daily spa entrance fee.

At the Hod I experienced my first Lomi Lomi massage. An import from Hawaii, it's performed in fluid, rhythmic motions, using the forearms as well as the hands to release blockages while redirecting a person's energy, thus facilitating healing on the mental, emotional, and spiritual levels. Adi enjoyed a shiatsu massage ("finger pressure" in Japanese), also meant to free energy blockages. Both are recommended.

Like many of the hotels by the Dead Sea, the Hod arranges "Mud Parties" for guests or travelers en route. People come to the beach, where spa employees take Dead Sea mud-rich in potassium, magnesium, sodium, bromide, and calcium-from large vats and apply it liberally all over the body. It takes fifteen to twenty minutes for the mud to dry under the hot desert sun (the drying process drawing toxins from the skin, firming and tightening it, and leaving it feeling softer to the touch), during which time visitors are treated to snacks and drinks. The mud is then washed off in the sea. Sure enough, after a beachfront mud treatment, my skin felt much softer.

Dead Sea spas in the hotels are open to the public. So we headed over to the Dead Sea Shizen (hotel-within-a-hotel) at the newly rebranded Daniel Hotel, where the candle-illuminated spa corridors exude a sense of harmonious quiet and the feeling of a world set apart. While Adi had a deep facial treatment that was as relaxing as it was cleansing, I experienced the Shizen's Alpha 33 capsule, coined the "Enterprise"-a self-contained dry-heat sauna with adjustable vibratory massage and an aromatic infusion system designed to soothe, stimulate, and condition the senses in a controlled environment-and I can now affirm that it fulfills its promise.

If you fancy yourself a gourmet, you'll be disappointed most of the time with the food at the Dead Sea. Outside the hotels there are no restaurants worth mentioning. At the hotel buffets, the food is plentiful, but tends toward the ordinary. For a refined selection of upgraded breakfast items, the Metro at the Daniel is the only game in town-and perhaps the only Dead Sea breakfast facility to offer 100% real orange juice, not the diluted, sugared-up stuff we encountered everywhere else-but its intimate dining area is usually available only to long-term guests or those staying in the hotel's executive- floor rooms.

These days, the one exceptional eatery open to all is the Sato Bistro restaurant. Situated within the Crowne Plaza Dead Sea, this European-style establishment offers dishes with nuances of the Far East-items such as sushi, duck salad (fresh green leaves with sliced breast of duck, crispy potatoes mixed with soy sauce, sake, honey, and wasabi), Asian carpaccio (sliced raw beef filet served with a cold soy vinaigrette and sesame oil), and grilled entrecôte steak (on sweet potatoes, with Szechuan sauce). And two new restaurants with potential are scheduled to open in early 2008 at the Daniel and Isrotel.

If you get a food craving in the wee hours of the night, your best bet is the Tulip Inn's "Bedouin Tent" (also known as the "Taj Mahal"), which offers finger food, drinks, water pipes, and-on Friday nights-skillful belly dancing by Sharon, the co-owner.

Aside from taking in treatments, sunbathing, and floating in the unsinkable, salty Dead Sea waters, there's not much to do here. And maybe that's for the best. After all, you're here to "rest and invite your soul." Still, close by you'll discover great sightseeing and adventure.

To get to know the Dead Sea terrain, you can book a jeep, camel, or donkey cart tour. We chose a half-day Land Rover trip with Barak Horvitz, a young, energetic, and knowledgeable licensed guide who enlightened us about the area's ecology, geography, geology, and history. Traversing and learning about the ruins of ancient Roman stockades, interesting salt formations, layers of minerals flecking the cliffs, and sea fossils atop the hills was so enjoyable, we booked a tour with Barak to a different part of the desert three weeks later.

A twenty-minute car ride from Ein Bokek brings you to Masada, the ancient desert cliff-top palace and fortifications built by King Herod more than 2,000 years ago. The newest attraction there is the onsite Yigael Yadin Museum, which exhibits artifacts preserved in the dry desert climate that until now had been dispersed in various collections and museums in Israel, including fragments of a tallit belonging to one of the besieged Jews, a Roman soldier's papyrus pay slip, and twelve lots inscribed on potsherds that were drawn by the Jewish leaders to determine who would kill whom as part of their mass suicide pact when their defenses were about to be overrun by the forces of the Roman Legion.

Drive a half hour north from the Dead Sea hotels district and you'll find the Kibbutz Ein Gedi Hotel on the grounds of an oasis of lush tropical botanical gardens-900+ species, including 250 cactus varieties. Exquisite! Booking one of the rooms in the kibbutz hotel's new Arugoth Wing, featuring views of inspiring desert vistas, is an excellent way to put yourself in an exploratory mood.

To experience the essence of the local landscape, take a hike in the Ein Gedi National Park. Be sure to ask the kibbutz tourism office for Zabu (Zevulun Levi'im), who will guide you along ancient paths through canyons and steep cliffs, reservoirs and lovely waterfalls, lush river vegetation and desert fauna. A sculptor and kibbutz member for more than forty years, Zabu, a short, white-bearded man well into his seventies, brings a wealth of knowledge and radiates a love of nature and history-and he can still climb hills with the agility of an ibex.

The Dead Sea is no longer off the beaten path. The new bypass road via Ma'ale Adumim circumvents the often-crowded streets of Israel's capital, reducing the travel time from Tel Aviv to the Dead Sea's hotel district to just slightly over two hours-and that's while driving at a sensible pace and taking in the exotic desert landscapes. From Jerusa­lem the drive takes only one hour. Private and shared car options to the Dead Sea also exist, as well as a daily bus service from Jerusalem. If you care to splurge, helicopter service is available too.

Cleopatra and King Herod, though, had to take the long route.