Growing as a Jew at a Catholic U. 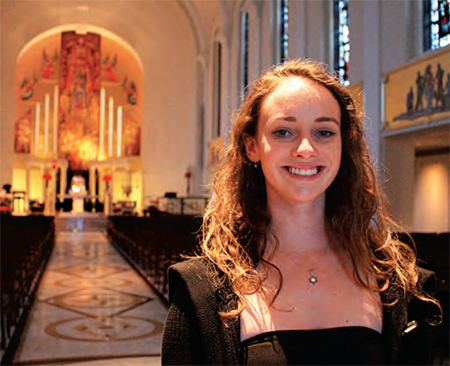 Attending a Catholic university - Loyola University in Chicago - might at first sound like a strange choice for someone who became a bat mitzvah, was confirmed at a Reform temple, and spent many summers at a Jewish sleepaway camp. The majority of students identify as Roman Catholic, and the university's small Hillel meant I'd likely miss out on the many Jewish opportunities other universities offered.

However, after I carefully considered the majors, programs, activities, and resources my ideal school would offer, Loyola seemed to be my best match, by far. So I accepted the school's offer and opened my mind to discovering ways to grow as a Jew at a Catholic university.

Now, after two semesters at Loyola, I've discovered two ways to do just that:

I soon discovered other Jewish-Catholic commonalities. Catholics forego certain tasty temptations during Lent; Jews go without leavened bread during Passover and fast on Yom Kippur. My rabbi asked congregants to wish one another "Shabbat Shalom"; priests ask people in the pews to say "Peace be with you." There are also cultural similarities: Some of my friends here wring their hands with "Catholic guilt," like my "Jewish guilt" when I forget to call my parents. By identifying commonalities - while respecting differences - I've learned about Catholicism and reinforced my own heritage.

Loyola has also introduced me to Catholic practices I find compatible with my Reform mindset. One weekend on a freshmen retreat program, I was introduced to what Jesuits call examen, the daily prayer that Saint Ignatius Loyola, my school's namesake, prescribed as a time to be thankful, ask God for assistance, review the good and bad parts of your day, ask God for forgiveness, and pray for God's graces. At their root I recognized these as Jewish teachings, too.

Then I realized I'd been missing something in my active college life. Where were the quiet, restorative moments I needed? At my home congregation I'd often found solace in saying the Sh'ma and in moments of silent prayer, so I decided to bring my own Jewish sensibilities to examen. I would carve out time from my busy schedule to be thankful, reflective, and humble. My reflective activities included journaling, practicing yoga, and going to Hillel.

I've found other Jewish parallels in Loyola's Jesuit educational philosophy, which embodies five hallmark characteristics: commitment to excellence, faith in God and the religious experience, service that promotes justice, values-based leadership, and global awareness. Judaism also promotes education, faith, social justice, informed leadership, and global responsibility. Interestingly, seeing these same ideals reinforced in a different religious context has strengthened my Jewish faith. One day, while cleaning up a local park with other Loyola undergraduates, I saw I was among students wearing hijabs and golden cross necklaces. I was volunteering because of my dedication to tikkun olam (repairing the world), other students were helping out of different religious convictions, and all of us saw value in bettering our community.

These days, when I'm asked what it is like to attend a Jesuit university as a Jew, I respond, "It is more Jewish than I ever would have imagined." Sure, there are crosses instead of mezuzot on the doors. But I've grown as a Jew by finding common ground in religious values, promoting interfaith harmony, and teaching others what I cherish in my own tradition.

Carlin Coffey is a Loyola University sophomore and member of Temple Israel in Columbus, OH.