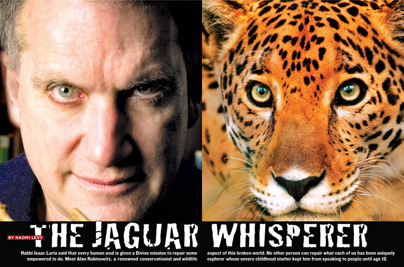 Rabbi Isaac Luria said that every human soul is given a Divine mission to repair some aspect of this broken world. No other person can repair what each of us has been uniquely empowered to do. Meet Alan Rabinowitz, a renowned conservationist and wildlife explorer whose severe childhood stutter kept him from speaking to people until age 19.

"Naomi," my husband Rob said, plugging his iphone into the stereo, "you need to listen to this."

I listened. One of the world's prominent zoologists, a man named Alan Rabinowitz, was being interviewed on National Public Radio about his life in the wild tracking the most elusive, dangerous animals on earth.

There was a sermon in his story, I just knew it. I decided to track him down.

Finally I decided I had to use my personal connections. Rob serves as editor of the Los Angeles Jewish Journal. I asked him if I could interview Alan for the newspaper. Rob said sure.

My plan worked. This time Alan called me back and consented to an interview, though he seemed unsure of why he was talking to some rabbi rather than a writer from National Geographic. And to be honest, I wasn't exactly sure why I was talking to a zoologist.

We ended up speaking for more than an hour, and for another hour the next day. He told me this was the longest interview he had ever given. It turns out that a zoologist can teach a rabbi a whole lot of Torah.

Born in Brooklyn, Alan Rabinowitz grew up in Queens in the 1950s to Jewish immigrant parents from Eastern Europe. He had a very difficult childhood because of his severe stutter-so bad, he couldn't speak. He had shakes and would spasm. His parents sent him for psychotherapy, hypnosis, even shock treatment; nothing helped. Back then no one understood that stuttering was genetic and neurological. In public school he was placed in the class for kids with mental retardation.

"My younger days were so difficult," Alan told me, "I just stopped talking to people."

But somehow he could speak to animals without stuttering. So every night, in the dark of his room, he would talk to his "New York pets": a chameleon, a green turtle, and a hamster.

"You understand me, and I understand you," he thought. "And you're just like me: You can think, you have feelings, but you don't have voices."

One day, as his pets were allowing him to pour his heart out to them, Alan made a vow: "If I ever find my voice and stop stuttering, I will be your voice."

Alan's father didn't know what to do about his son's stuttering or social isolation, but he discovered a place where Alan felt more relaxed: the Great Cat House at the Bronx Zoo. The big cats occupied cage after cage of concrete jail cells, the jaguar coughing, the tiger roaring amidst the stinks of wilderness. "The place emanated with energy and power," Alan told me, "but it was a locked-up power. All that energy was being held captive and begging to be released."

Alan would lean over the bar of the jaguar cage, get as close as he could. A large jaguar would stare at him; he'd meet its eyes. Alan empathized with its sadness, frustration, anger-"my same energy and anger."

Alan remained mute, set apart from the world of people, until age 19, when he entered a clinic in upstate New York that took a novel approach to treating stuttering. In this intensive program, which disallowed any communication with the outside world (no visitors or phone calls), suddenly he could speak.

But strangely enough, he then realized he didn't wish to be among the world of people. "My whole life," he said, "all I wanted was to be accepted, and then when I could finally speak fluently, most people didn't have anything to say."

He realized he would rather be with animals. So he went to graduate school, studied biology, and escaped to places where language wasn't that important.

Alan became a renowned explorer. He lived in caves chasing bats. He tracked and captured bears, tigers, jaguars, leopards, and rhinos. He discovered new animal species and documented lost human cultures. He traveled to remote places to save tigers, lions, leopards, and jaguars from extinction. He set up the world's largest tiger reserve-9,000 square miles in Burma, roughly the size of Vermont.

This stuttering kid from Queens had become (according to The New York Times) the "Indiana Jones of Wildlife Protection."

He also established the world's first jaguar preserve in Belize. One day, while alone on the preserve tracking a large male jaguar, suddenly he turned around and realized: The jaguar was now tracking him. He was terrified. He decided to stand up, but tripped and fell down on his back. "Oh my God," he thought. "It's going to come at me now. There's nothing I can do if it wants to kill me."

But instead, the jaguar let out a growl and walked away toward the forest. Right at the forest edge it turned back and looked at him. And Alan remembered that look so clearly from the jaguar of his childhood at the Bronx Zoo. Suddenly the words he'd spoken as a child came back to him: "I'll find a place for us." Alan had kept his promise of so many years ago: The jaguar had his home now. And Alan was no longer that stuttering kid trapped in his own mind.

Listening to Alan's story, I suddenly realized why it moved me so much. Every year on Rosh Hashanah I challenge my congregants to discover our missions in life, to become the people God wants each of us to be, to find an answer to the question: Why am I here?

Rabbi Isaac Luria, the great Jewish mystic who lived in Zefat in the 1600s, said that every human soul is given a Divine mission to repair some aspect of this broken world. No other person can repair what each of us has been uniquely empowered to do.

But how do you determine your Divine mission if you have never been told what it is?

Alan's life story reminded me of the Jewish mystical teaching: Our greatest impediments hold the key to discovering our life's Divine mission.

At the end of our first interview I asked Alan if he'd ever thought about the parallels between his story and that of Moses-the man with a stutter who served as God's spokesman and the Jewish people's greatest prophet.

The next day Alan told me he'd spent the night thinking about our conversation. "You've made me think quite a lot about things which I normally don't think about, like whether there's a higher purpose for what I do. I always thought my life had a mission, but I never thought about it as a Divine mission."

When I told Alan of the teaching that a person's greatest block holds the key to his Divine purpose, he got very excited. "Naomi," he said, "stuttering gave me my life. It was a gift. I'm so grateful to have been born a stutterer, because that's how I got where I am. Of course it isn't a gift I would wish on anybody. But just the same, everything I am today comes from stuttering, which led to my bond with animals, my love of nature, my drive to prove myself to the world."

Alan said his stutter also gave him the tools to become a superb wildlife biologist-he spent his childhood watching and listening. It taught him how to read people, too. "I can hear them loudest when they're not talking."

I told Alan about the shofar blast on Rosh Hashanah. The shofar's power is the power of a cry without words-a prayer, a call, a roar so deep, no words can describe it. It's like how sometimes we want to pray, but don't know where to begin or what to say.

Alan laughed. "You must be kidding," he said. He couldn't believe this wisdom was part of Jewish tradition. He'd walked away from temple a long time ago, after he'd been received with less than compassion in Hebrew school. He felt angry with God for having been tortured as a child "for no reason." The clincher was when his father, who worked three jobs to stay afloat, couldn't afford to pay for their High Holy Day tickets and the synagogue turned them away.

Over the years Alan had found his way back to God-a God to be found in the wildest jungles who transcends "what you can see and touch and feel."

As Alan's story would reveal, even when we have found our Divine mission we are not home free, because every year, every day has its mission. Every challenge brings with it the opportunity to understand our Divine purpose in a new way.

In 2002, just as Alan was feeling comfortable in his life and ready to slow down and relax, he was diagnosed with Chronic Lymphocytic Leukemia, a slowly progressing but incurable form of cancer. It was a shock to a man who had always prided himself on being physically active and healthy. He had come to believe he could fight anything. He'd escaped so many near-death situations-being face to face with tigers and jaguars, trekking through malaria-infested jungles, being speared by a bamboo trap in a forest, facing down village strongmen and military dictators-and "Here I've got something I can't fix."

And yet…just when he was starting to feel complacent about his life, the cancer reinvigorated him, renewing the urgency he felt for saving wildlife. "It was a huge wake-up call. I didn't know how many more tomorrows there would be."

Cancer, he realized, "can be something good if I make it something good." Life, he now understood, is about facing challenges as they come your way and incorporating them as part of who you are.

As the psalmist says, "The stone the builders have discarded has become the cornerstone."

Rabbi Naomi Levy is the author, most recently, of Hope Will Find You: My Search for the Wisdom to Stop Waiting and Start Living (Doubleday Religion, 2010), and founder and director of Nashuva, a Jewish outreach organization in Los Angeles. Alan Rabinowitz continues to do well, tirelessly working as president and CEO of Panthera, a nonprofit conservation organization.