8 Thematic Ideas to Make Every Night of Hanukkah Shine 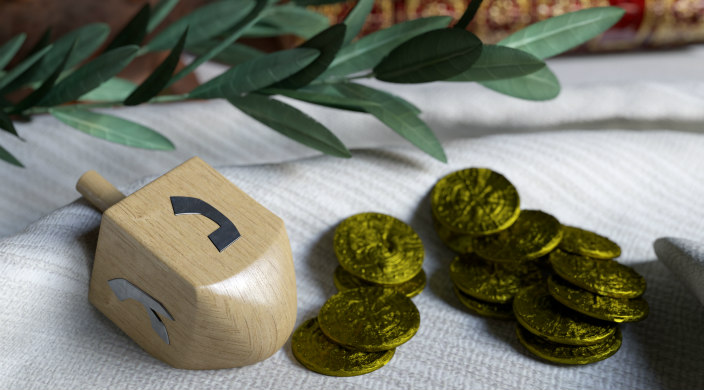 Hanukkah is awesome. However, it seems that each year, we hear comments that downplay its place in Jewish life. Even I have caught myself saying, “Actually, Hanukkah is a very minor holiday…” and “Hanukkah is not about giving gifts…” and “We only celebrate that way because of its proximity to another holiday…”

Although Passover is wonderful, and the Talmud reveres Sukkot as “the Holiday,” neither can hold a candle (no pun intended!) to Hanukkah. After all, Hanukkah, also known as the Festival of Lights, has something those other Jewish holidays don’t: momentum. Jews, especially our kids, get excited about it.

Let’s capitalize on that momentum, using it to share meaningful Jewish experiences with family and friends. To that end, I offer eight wonderful things about Hanukkah, one for each night, that can enhance our celebrations of this beloved holiday.

We’re commanded to eat fried food during Hanukkah. Latkeslatkeלְבִיבָה"Pancake" (Yiddish); fried potato pancake often eaten on Hanukkah; plural: latkes. , sufganiyotsufganiyotסֻפְגָּנִית"Jelly doughnuts;" traditionally eaten in Israel during Hanukkah; singular: sufganiyah. , and other fried foods help us recall the miracle of the oil. Admittedly, it’s more minhagminhagמִנְהָגCustom, which may carry the weight of halachah (law).    than mitzvahmitzvahמִצְוָהLiterally, “commandment." A sacred obligation. Jewish tradition says the Torah contains 613 mitzvot Mitzvot refer to both religious and ethical obligations. , but it’s still an essential part of the holiday. When else can you gorge on chocolate geltgeltכֶּסֶף"Money" (Yiddish); often given as a Hanukkah gift; used for playing dreidel. , free from guilt, and call it a religious observance?

One of Hanukkah’s themes centers on religious freedom, reminding us to be grateful for our ability to be a distinct minority within North America. The rabbis of the Talmud ordained that our hanukkiyothanukkiyahחֲנֻכִּיָּהNine-branched candelabra used during Hanukkah – eight branches for each night of the holiday, plus another branch (often taller, central, or more prominently displayed) for the shamash (helper) candle, which is used to light the others.  be publicly displayed to show we are proud to be Jewish. Our candles, as detailed in the Book of Isaiah, serve as a “light to the nations” and an expression of our identity as Jews. They also invite our neighbors to ask about and learn the story of Hanukkah and the Jewish people.

Each night of Hanukkah offers an opportunity to engage in a Jewish activity at home. Only one other holiday, Sukkot, includes a sustained ritual for more than a week!

With every candle comes a chance to gather around the menorah and talk about Hanukkah’s lesson. With some planning, a different topic could be discussed each night. Whether it’s the environment, social justice, tzedakahtzedakahצְדָקָהFrom the Hebrew word for “justice,” or “righteousness;” refers to charity or charitable giving. May also be translated as “righteous giving.”  , or freedom, Hanukkah delivers eight invitations for learning.

After the candles have been lit, we play dreidel – but if dreidel gets old, change the rules! Who can spin the dreidel the fastest, the longest, the farthest? Who can spin it upside down? You can even bring out the board games and card games, making every night of Hanukkah a family fun night. Whether or not your house includes children, the holiday offers a special time for all of us to rejoice in play.

Everyone loves to receive gifts, but let’s not forget the satisfaction of giving them. Who hasn’t gotten great joy from seeing someone’s face light up when a gift strikes just the right chord? Giving feels good. Beyond our family and friends, Hanukkah can also be a vehicle for giving to the less fortunate.

The Union for Reform Judaism has proposed that the sixth night of Hanukkah be designated as a ner shel tzedakah (candle of righteousness), reminding us to be charitable. Instead of giving gifts to each other, set aside that night to give to those in need.

Many Jewish songwriters – Irving Berlin, for example – wrote songs for other holidays, but we have many beautiful Hanukkah songs that can be played and sung around the hanukkiyahhanukkiyahחֲנֻכִּיָּהNine-branched candelabra used during Hanukkah – eight branches for each night of the holiday, plus another branch (often taller, central, or more prominently displayed) for the shamash (helper) candle, which is used to light the others. . Among them are “Ma Oz Tzur” (“Rock of Ages”) and “Ocho Kandelikas” (“Eight Little Candles”). “Dreidel,” “Sevivon Sov Sov Sov,” “Oh, Hanukkah,” and Adam Sandler’s “Hanukkah Song,” a holiday mainstay, can be fun, too.

Check out these Hanukkah playlists to keep you rockin' all holiday long.

Hanukkah celebrations do have a few requirements. We light candles, recite blessings, and then the sky’s the limit: act out the Hanukkah story in full costume, or with just the props from around your house; designate a movie night; do arts and crafts or, frankly, anything you enjoy that adds to the joy of the holiday. Every night is an opportunity for a special event.

Most important, may we all make the most of the opportunities this holiday provides, using them to have the happiest and most joyous Hanukkah season ever.