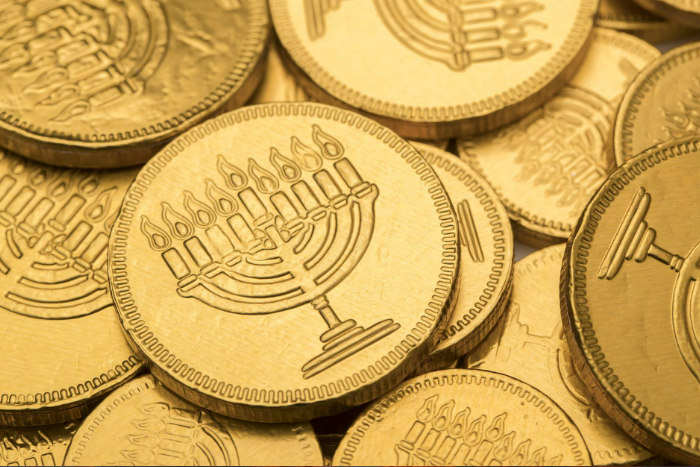 Scholars have offered several theories as to the inventor of Hanukkah geltgeltכֶּסֶף"Money" (Yiddish); often given as a Hanukkah gift; used for playing dreidel. . One traces the tradition back to the decision of the Hasmoneans to mint their own nation's coins after their military victory over the Greek Syrians.

Another theory focuses on the name of the holiday. Although Hanukkah means "dedication," it is linguistically related to hinnukh, which means "education." Perhaps for this reason, some Jewish communities chose Hanukkah as the time to celebrate the freedom to be educated Jewishly. Revered Jewish scholar Maimonides made the education/gelt connection when he described gelt as "an incentive for you [children] to study Torah properly."

Writing in the early 18th century, a disciple of the Ba'al Shem Tov (the founder of Hasidic Judaism) noted that it was customary for rabbis to make educational pilgrimages to remote villages during the Hanukkah season to strengthen the Jews' study of Torah. Initially the rabbis rejected payment for these services, but subsequently they came to accept coins as well as whisky, food, and honey as compensation for lost time away from home - in effect, a gift of Hanukkah gelt.

It wasn't until the 19th century that Hanukkah gelt was given primarily to children.

In Sephardic and Oriental (following the customs of Jews from North Africa and the Middle East) Jewish communities, poor children would go door-to-door during the holiday offering to protect Jewish homes from the Evil Eye by burning special grasses in exchange for money or gifts. In Yemen, children would receive a daily coin from their parents to purchase the sugar and red food dye needed to make the "Hanukkah wine" consumed at nightly gatherings during the holiday.

In the 20th century, as political Zionism gained a strong following, the recounting of the Maccabees' efforts to reclaim the Temple became symbolic of the passionate desire for an independent Jewish state. Adults retold the Hanukkah story and gave children coins as they taught them about their heritage.

Perhaps the most familiar form of Hanukkah gelt today is a chocolate coin covered in gold foil. This tradition is decidedly European in origin, probably dating from the late 18th and early 19th century, when Jews figured prominently in chocolate manufacturing. Fashioning coins out of chocolate would have allowed poor children to take pleasure in the growing Jewish tradition of receiving gelt at Hanukkah time.

This year, may we all remember the values of Hanukkah: Jewish pride, religious freedom, and, as exemplified by gelt, the gift of learning.

Make your own chocolate truffle gelt and learn about how fair trade chocolate embodies the message of Hanukkah.