Miriam's Cup: A Supplemental Reading for the Passover Haggadah 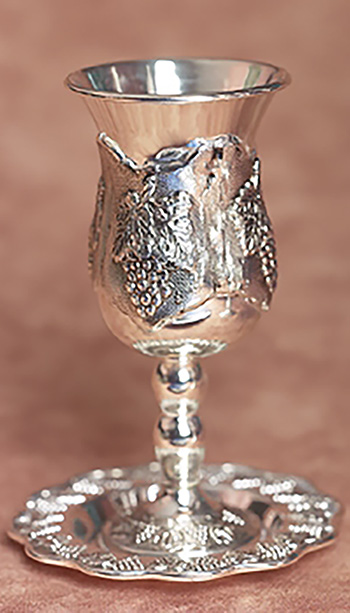 For so many of us, the seder is a multi-generational event.

For so many of us, the first night of Passover is all about filling the seder plate with symbolic foods, reading from the Haggadah, drinking wine, eating matzah and partaking in a festive meal.

For so many of us, Passover is also a time for honoring our children by showcasing their school projects, showing gratitude for all those who helped organize and prepare for this night - and of course, for remembering the traditions of past generations.

We marvel that we have made it to another seder with the strength and wherewithal to participate in this event that is more than an annual recollection or a commemoration, but an active reenactment of our transition from enslavement to freedom.

For so many of us, as we retell the story of the Exodus from Egypt, we will read with wonder about the many miracles that transpired. We will recount the story of the Four Children and read the words of our great sages.

And for so many of us, we look to pay tribute to the girls and women, past and present, who make such important contributions to our lives and to Judaism as a whole. We do this by including Miriam’s Cup in our seder.

You can also download a printable copy of this reading insert.

Miriam’s Cup: A Supplemental Reading for the Passover Haggadah

This set of readings was formulated in order to highlight and celebrate Miriam’s role in the deliverance from slavery and her leadership throughout the wandering in the wilderness.

When the seder table is set, we place an empty cup alongside Elijah’s cup. Each attendee at the seder then pours a bit of his or her water into the cup. This contribution symbolizes that, at every stage of her life, Miriam was integral in the Exodus of the Israelites from Egypt. We pour water, specifically, because it plays a recurring role in the Exodus – the rescue of Moshe, the first plague in Egypt when the water is turned to blood, the parting of the Red Sea, and so on. Today, we continue the fight to protect women, to raise them up, and to honor their equality and agency. We take this moment to remember Miriam for the role model that she is, to honor the girls and women who are at the seder table, and to remember those who have touched our lives.

1 A certain man of the house of Levi went and married a Levite woman.  2 The woman conceived and bore a son; and when she saw how beautiful he was, she hid him for three months.  3 When she could hide him no longer, she got a wicker basket for him and caulked it with bitumen and pitch. She put the child into it and placed it among the reeds by the bank of the Nile. 4 And his sister stationed herself at a distance to learn what would befall him. 5 The daughter of Pharaoh came down to bathe in the Nile while her maidens walked along the Nile.  She spied the basket among the reeds and sent her slave girl to fetch it.  6 When she opened it, she saw that it was a child; a boy crying. She took pity on it and said, "This must be a Hebrew child." 7 Then his sister said to Pharaoh's daughter, "Shall I go and get you a Hebrew nurse to suckle the child for you?” 8 And Pharaoh's daughter answered, “Yes.” So the girl went and called the child’s mother.  9 And Pharaoh's daughter said to her, "Take this child and nurse it for me, and I will pay your wages." So the woman took the child and nursed it. 10 When the child grew, she brought him to Pharaoh's daughter, who made him her son. She named him Moses, explaining, "I drew him out of the water.

Discuss: Take a moment to honor the young girls who are participating in your seder. Share your hopes and dreams for them, and, if appropriate, have them share their aspirations with the seder guests.

20 Then Miriam the prophetess, Aaron’s sister, took a timbrel in her hand; and all the women went out after her in dance, with timbrels. 21 And Miriam chanted for them, “Sing to God, for God has triumphed gloriously; Horse and driver God has hurled into the sea.”

Discuss: Take a moment to honor the women at your seder. Ask them what achievements in their lives give them the greatest sense of pride, and celebrate their contributions within the family and in the public realm.

1 The Israelites arrived in a body at the wilderness of Zin on the first new moon, and the people stayed at Kadesh.  Miriam died there and was buried there.  2 The community was without water... Rashi’s Commentary: From here we derive that all forty years they had the well in Miriam’s merit.

Discuss: Take a moment to share a memory of a female role model in your life who is no longer with you, and reflect on what that loss has meant to your life.

Want to go beyond Miriam's Cup and add even more social justice components to your Passover experience? Learn about other modern additions to the seder.