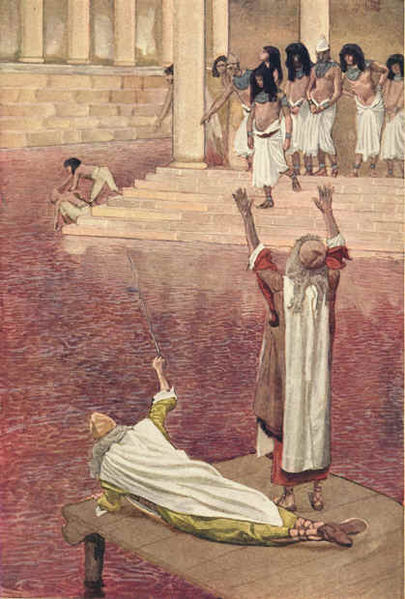 The holiday of Passover (Pesach in Hebrew) is perhaps one of the most central to Jewish life and history. More widely observed than any other holiday, Passover celebrates the biblical account of the Israelites’ redemption and escape from 400 years of Egyptian slavery. Holiday rituals include a dramatic retelling of the Exodus story and many unique food traditions. We come together with friends and family to celebrate the great lessons of the story: the blessing of freedom and the reminder that since we were once slaves and were freed, it is our responsibility to work for freedom for all people, everywhere.

The word “Passover” is derived from the Hebrew word pasach, which means "passed over,” referring to the 10th plague that killed the Egyptian firstborn, but miraculously “passed over” the houses of the Israelites (more on that below).

The story begins with Joseph, son of Jacob, who was sold into slavery by his brothers and arrived in Egypt as a poor, powerless servant. Joseph’s wisdom and ability to interpret dreams soon brought him power and status, though, and he became the Egyptian king’s trusted advisor. His entire family joined him in Egypt, as did many of the rest of the Israelites. There they prospered and multiplied for many generations.

But a new king (“pharaoh”) came to power in Egypt – one who did not remember how helpful Joseph had been. The Israelites’ numbers had greatly increased over many years, and the new Pharaoh was suspicious of them, fearing they would someday rise up against him. So he treated them harshly, forcing them to work as slaves in terrible conditions. Nevertheless, the Israelites survived and continued to multiply.

Dismayed by their fortitude, Pharaoh took harsher action, declaring that all sons born to Israelite women should be killed at birth. The courageous Israelite midwives, Shifrah and Puah, defied this decree, but the infant boys were still in great danger.

When an Israelite woman, Yocheved, had a baby boy, she feared for his life. She placed him in a basket and set him floating in the Nile River, near where people came to bathe. As Yocheved’s daughter, Miriam, watched from a distance, Pharaoh’s daughter came to the river and found the baby in the basket. She took him, named him Moses (“drawn from the water”), and raised him as her own.

Growing up in the palace, Moses knew very little of the life he might have led. As he grew, however, he became aware of the plight of his people. One day, seeing an Egyptian taskmaster beating an Israelite slave, Moses killed the taskmaster.

Realizing what he had done, Moses fled to the land of Midian, where he married a Midianite woman, Tzipporah, and became a shepherd.

Tending his flock one day, Moses came upon an amazing sight – a bush that was burning, but not consumed. God spoke to Moses there, telling him that Moses and his brother, Aaron, would free the Israelites from slavery. Moses was unsure anyone would listen to him, but God promised support and powerful signs, so Moses left Midian and returned to Egypt.

Moses and Aaron went to Pharaoh and demanded Pharaoh free the Jews (“Let my people go,” Moses tells Pharaoh in Exodus 5:1). But Pharaoh, skeptical that Moses spoke on behalf of God, refused. In retaliation, Pharaoh forced the Israelites to work even harder and beat them mercilessly.

God then told Moses that, as proof of God’s power, the Egyptians would suffer a series of plagues until Pharaoh agreed to let the Jews go:

During the last plague, God killed the firstborn of each Egyptian family, but “passed over” (thus “Passover”) the houses of the Israelites (who had marked their doors with lamb’s blood), leaving their children unharmed. With this plague Pharaoh finally relented, and let the Israelites go. They hurriedly packed and left Egypt, without enough time for their bread to rise (hence the holiday’s prohibition on eating leavened, or risen, grain products, and the custom of eating matzahmatzahמַצָּהUnleavened bread eaten during the seder that symbolizes the hurried departure of the Israelites from Egypt. Eating matzah is obligatory only at the seder. During the rest of Pesach, one may abstain from matzah as long as all chametz is avoided; plural: matzot ).

Pharaoh immediately regretted his decision, and his army chased the Israelites to the Red (actually “Reed”) Sea. With the sea ahead of them, and Pharaoh’s army closing in behind, the Jews appeared to be doomed. At that very moment, though, God told Moses to stretch his staff over the sea, and, in perhaps the greatest miracle in all of Jewish tradition, the waters parted, allowing the Jews to cross on dry land.

Just as they reached the far shore of the sea, the waters closed, drowning Pharaoh and his soldiers. Moses, Miriam, and all the Israelites sang songs of praise to God for their deliverance, including Mi ChamochahMi Chamochaמִי כָמוֹךָLiterally, “Who is like You?” Verses from Exodus 15:11 that are incorporated into the prayer service. These verses are an excerpt from the song that the biblical Israelites sang after crossing the Sea of Reeds to safety. , which appears in our modern liturgy, and the Israelites began their journey in the desert.

History of the Celebration

The Torah commands us to observe Passover for seven days. Many Jews in North America and in Israel follow this injunction, but some outside Israel celebrate for eight days. The additional day was added to Passover and other holidays around 700-600 B.C.E. to guard against a possible error because elaborate networks of mountaintop bonfires were used to signal holidays’ beginnings. Although today’s dependable calendar allows us to know when holidays start and end. the eight-day celebration remains ingrained in law and practice for some Jews outside Israel.

Celebrated in various ways throughout history, Passover incorporates remnants of ancient spring harvest festivals. When the Temple existed, the holiday was one of three major festivals that required pilgrimages to Jerusalem to bring sacrifices. After the destruction of the Second Temple, Passover became a more communal, home-centered holiday, with the Haggadah HaggadahהַגָּדָהLiterally, “telling.” This is the Jewish text that sets forth the order of the Passover seder. Plural: Haggadot.  and the sedersederסֵדֶר"Order;" ritual dinner that includes the retelling of the story of the Israelite's Exodus from Egypt; plural: sederim.  as we know them mostly finalized around 500-600 C.E.