The Fascinating Evolution of the Purim-Spiel 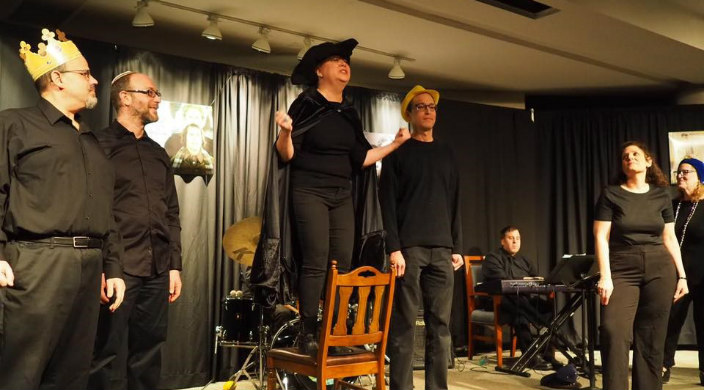 "Today is Purim, tomorrow it's gone –
Give us a penny, and throw us out!"

The humble yet beloved Purim-spiel ("play" in Yiddish) is the only genuine folk theater that has survived a thousand years of European culture, and in our day has morphed and flourished. Let's take a quick look at this amazing story.

Chazal (the Jewish sages from mishnaic times through the period of the Talmud) condemned the theater as frivolous at best and vulgar/pagan at worst. But the rabbis' view was crystallized during the Roman Era, when live theater was often cruel and violent, and involved slaves, including Jews, as actors who were sometimes killed as part of the drama. Nevertheless, the rabbis faced a dilemma with the holiday of Purim; the theatrical story of Esther is based on disguise, farce, melodrama, comedy, and victory over existential threat. Rejoicing, masquerade, irreverence, and even drunkenness therefore became universal laws and customs of Purim.

Public reenactment started in the early centuries C.E. with the hanging and burning of Haman in effigy by Levantine Jewish communities under Christian and then Muslim rule. It was in medieval Europe, however, that the spiel got its start – in the larger cultural context of both Christian and secular folk entertainment, drama, carnival and parody. According to historian Chone Shmeruk1 the term Purim-spiel was found throughout Ashkenazic Jewry as early as the mid-1500s. The spiel could be a poetic monologue, or a story portrayed by several actors – usually the story of Esther, but also other biblical stories, such as the selling of Joseph, Hannah and Samuel, or David and Goliath. Since most Jewish men were literate and traditionally educated, midrash/aggada (stories told by the sages which reflect or add to stories from the Torah) and commentary were also incorporated – along with satire directed at the rabbi, cantor, k'hilah (community) leaders, and other authorities.

Secular stories were portrayed too, particularly derived from the characters of the Italian commedia del arte. Nahma Sandrow, author and theater/cultural historian, notes that the characters were either melded into the characters of the Megillah (scroll, here referring to the scroll of Esther) or their stories placed between scenes of sacred texts.2 For example, King Ahashverosh becomes Pantalone, the old king fearful that his young Queen Esther is two-timing him. In fact, suggestive themes and language were popular elements of a certain sub-genre that at times led the rabbinic establishment to ban spiels outright. Sandrow offers this (rather tame) example: Mordecai explains that Esther is a whore's daughter, and says:

...Other girls make the bed and heat the oven, but she makes the oven and warms the bed. What other girls have on the bottom she has on top, and vice versa. So...do me a favor and kiss her bottom...3

For an extensive scholarly look at the subversive, scatological genre Akhashveyresh-spiel, see Ahuva Belkin's article Low Culture in the Purim spiel.4 Dr. Belkin stresses, too, the oral transmission of all types of spiels, their songs, costumes and production, both within families and generations of performers, and the survival of only a fraction of this once-flourishing material.

Purim-spiels were acted primarily by poor people like students, musicians, dancers, acrobats and artisans. They were performed either in large public venues like yeshivas, or especially for wealthy families, typically in their homes after the festive meal. If the community was small, the actors took great pains to rehearse in secret and disguise themselves thoroughly so they would not be recognized to their shame. They walked through the streets from house to house, followed by hordes of excited children, who would crowd into or hang from the windows of the homes of the rich, in order to see the performance. In these homes the actors were rewarded in the form of money and/or food. Afterward, they would eat together and dish their wealthy benefactors.5

The spiel also featured stock pan-European characters such as the marshalik (master of ceremonies), payats (clown), lets (jester), and nar (fool) – besides the badkhn (the Jewish wedding jester). All the roles were played by men and boys – the only day of the year when cross-dressing was allowed, although a few women were known to be acrobats and dancers. When the Haskalah (the Jewish Enlightenment of the 18th and 19th centuries) reached Eastern Europe, a whole new genre of parodies arose, written by maskilim (leaders of the Haskalah) against the traditionalists. Here's an example of a maskilic (Enlightenment-era) Purim song, performed by the klezmer band Kapelye, from their album Future and Past. It starts off with the widespread Yiddish folk rhyme above. It also includes the stanza: "And all our enemies call us treyf-eaters! But they are heretics, may they catch the plague!"

Although the Haskalah introduced new targets for satirization (e.g. Hasidim), the Purim-spiel as a genre was hemmed in by religious stricture, convention and the ever-present threat of political crackdown. Although Yiddish theater, Sandrow argues, did not spring directly from the Purim-spiel, it was "animated" by the spiel's "energy and warmth… compressed vitality and intimate intensity."6 The marvelous Yiddish musical, The Megile of Itsik Manger, originally produced in Israel in 1972, is based on a cycle of Yiddish poems by 20th-century Romanian poet Itsik Manger. In it, the story of Esther is set in early 20th-century Eastern Europe, with its tailors, revolutionaries, despots, haute bourgeoisie and cultural upheaval. Here is the opening song, whose translation is "Be quiet, Jews, we are starting our Purim spiel, in rhyme, with a thousand flavors." The music was written by Dov Seltzer and the original cast recording features the veteran Yiddish theater Burshteyn family, including their young son, Mike Burstyn. It is currently in a terrific revival at the Folksbiene in New York City, and in Berkeley, California.

The amateur folk quality of the Purim-spiel, and its ability to be ever-topical and irreverent, has guaranteed its survival in synagogues and schools to this day – our people's folk institutions. Take a look at a YouTube video of a recent Bobover Hasidic-spiel – the Bobover stage by far the most elaborate spiels among the ultra-Orthodox. In Israel, the Talmudic-era carnival and costume traditions have taken on new life in the Ad Lo Yada parades, street theater and parties throughout the country.

And in Dobbs Ferry, New York, we're doing the Megillah According to the Beatles7 this Purim. Marbim b'simcha! May we increase in joy!

Janet Leuchter earned her Masters in Sacred Music from Hebrew Union College-Jewish Institute of Religion in 1999 and previously served Congregation Beth Elohim in Brooklyn and Temple Avodah in Oceanside, NY. She is currently the cantor of Greenburgh Hebrew Center, in Dobbs Ferry, NY.