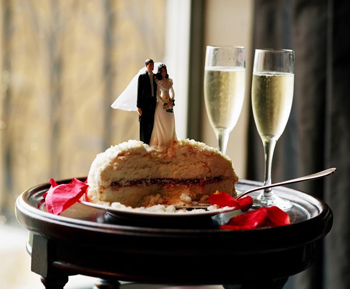 Marriage is a keystone of Jewish life. The term for marriage, kiddushin, is derived from the Hebrew word for holiness. In Judaism, the marital union provides a way for us to experience holiness in our daily lives. According to our mystical tradition, we can only behold the Shechinah, the Divine Presence, when we are in loving partnership (Zohar vol. 3, "Aharei Mot").

The centrality of marriage is underscored in the Torah. Indeed, the story of humanity begins with marriage. When God creates Adam, God states: "It is not good that Adam is alone--I shall make a match for Adam" (Gen. 2:18).

Despite the importance of marriage, the Bible makes no mention of the wedding ceremony. When Isaac meets his bride, Rebecca, he takes her into his mother's tent and she becomes his wife (Gen. 24:67). When Jacob takes Leah and then Rachel as wives, there is a reference to the consummation of the union but no mention of a ceremony (Gen. 29:21-28). The same is true of the Prophet Hosea, who was commanded to take Gomer, a prostitute, for a wife (Hosea 1:2-3). According to a rabbinic legend, God took part in the marriage ceremony of Adam and Eve: "It is taught in the name of R. Simeon ben Yohai: God adorned Eve like a bride and brought her to Adam" (Genesis Rabbah 18:1).

The obligations related to the Jewish wedding ceremony are discussed in the Talmud. The Mishnah states that marriage requires a marriage contract, money given to the bride, and consummation. The marriage contracts, or ketubah, is a document written in Aramaic that lists these responsibilities of the husband to the wife, among them the provision of food, clothing, and conjugal rights. The ketubah is also an insurance policy which includes the amount to be paid to a wife in case of divorce or upon the husband's death.

Several Jewish wedding practices have surprising origins. In the traditional wedding ceremony, the bride circles the groom three or seven times, a custom deriving from the ancient belief that the best way to prevent the demon Lilith from taking the life of the groom is to form a magic protective circle around him. The breaking of the glass was originally performed after the circling of the groom, so that if Lilith were standing alongside the groom, the crashing would frighten her and cause her to flee from the circle. Over time the breaking of the glass was moved to the end of the ceremony and ascribed a new meaning--the reminder that at the height of our joy, we must remember the destruction of the Temple in Jerusalem. We think of the chuppah as a uniquely Jewish tradition, but it is actually borrowed from the Roman Catholic church, according to Joseph Gutmann, professor emeritus of Wayne State University in Detroit, MI. In the Middle Ages the priest placed a cloth over the bridal pair and recited one the following verses: "Spread your robe over your handmaiden (Ruth 3:9) or "I spread your robe over your handmaiden" (Ezekiel 16:8).

Reform Judaism has changed some aspects of the wedding ceremony, in great part to reflect the equal status of women. One of Reform's earliest changes was the double ring ceremony. At the Augsbrug Synod in 1871, it was resolved that "after the bridegroom presented the ring to his bride with the words hare at mekudeshet li ("By this ring you are consecrated to me..."), the bride in her turn [could] also give the bridegroom a ring with a few appropriate words." Rabbi Joseph Aub of Berlin recommended that the bride use the phrase, "I am my beloved's, and my beloved is mine." Today, Reform rabbis usually suggest that both bride and groom say, "By this ring you are consecrated to me according to the tradition of Israel." Another change has been the writing of egalitarian ketubot. For example, modern ketubot language might read: "I will love, honor and respect you. I will provide for you and sustain you as is proper for a Jewish [husband/wife]." In addition, many couples have chosen to personalize their own ketubot under the guidance of their rabbi.This provides them with a unique opportunity to study and explore together the meaning of Jewish marriage.

Initially, Reform Judaism abandoned the traditional practices of the bride walking around the groom, the breaking of the glass, and, in many cases, even the use of the chuppah. As times changed, however, brides and grooms felt something was lacking and brought back the chuppah--many making their own--and the breaking of the glass. Many couples today have gone a step further--both the bride and groom break the glass, to demonstrate their equality in the marriage.