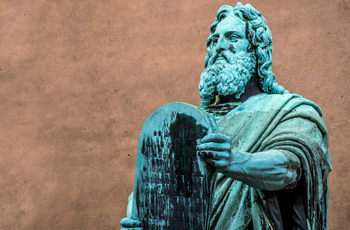 18:1] Jethro priest of Midian, Moses’ father-in-law, heard all that God had done for Moses and for Israel, God’s people, how the Eternal had brought Israel out from Egypt. 2] So Jethro, Moses’ father-in-law, took Zipporah, Moses’ wife, after she had been sent home, 3] and her two sons—of whom one was named Gershom, that is to say, “I have been a stranger in a foreign land”; 4] and the other was named Eliezer, meaning, “The God of my father’s [house] was my help, delivering me from the sword of Pharaoh.” 5] Jethro, Moses’ father-in-law, brought Moses’ sons and wife to him in the wilderness, where he was encamped at the mountain of God. 6] He sent word to Moses, “I, your father-in-law Jethro, am coming to you, with your wife and her two sons.” 7] Moses went out to meet his father-in-law; he bowed low and kissed him; each asked after the other’s welfare, and they went into the tent.

13] Next day, Moses sat as magistrate among the people, while the people stood about Moses from morning until evening. 14] But when Moses’ father-in-law saw how much he had to do for the people, he said, “What is this thing that you are doing to the people? Why do you act alone, while all the people stand about you from morning until evening?” 15] Moses replied to his father-in-law, “It is because the people come to me to inquire of God. 16] When they have a dispute, it comes before me, and I decide between one party and another, and I make known the laws and teachings of God.”

17] But Moses’ father-in-law said to him, “The thing you are doing is not right; 18] you will surely wear yourself out, and these people as well. For the task is too heavy for you; you cannot do it alone. 19] Now listen to me. I will give you counsel, and God be with you! You represent the people before God: you bring the disputes before God, 20] and enjoin upon them the laws and the teachings, and make known to them the way they are to go and the practices they are to follow. 21] You shall also seek out, from among all the people, capable deputies who fear God—trustworthy deputies who spurn ill-gotten gain. Set these over them as chiefs of thousands, hundreds, fifties, and tens, and 22] let them judge the people at all times. Have them bring every major dispute to you, but let them decide every minor dispute themselves. Make it easier for yourself by letting them share the burden with you. 23] If you do this—and God so commands you—you will be able to bear up; and all these people too will go home unwearied.”

24] Moses heeded his father-in-law and did just as he had said. 25] Moses chose capable deputies out of all Israel, and appointed them heads over the people—chiefs of thousands, hundreds, fifties, and tens; 26] and they judged the people at all times: the difficult matters they would bring to Moses, and all the minor matters they would decide themselves. 27] Then Moses bade his father-in-law farewell, and he went his way to his own land.

19:1] On the third new moon after the Israelites had gone forth from the land of Egypt, on that very day, they entered the wilderness of Sinai. 2] Having journeyed from Rephidim, they entered the wilderness of Sinai and encamped in the wilderness. Israel encamped there in front of the mountain, 3] and Moses went up to God. The Eternal One called to him from the mountain, saying, “Thus shall you say to the house of Jacob and declare to the children of Israel: 4] ‘You have seen what I did to the Egyptians, how I bore you on eagles’ wings and brought you to Me. 5] Now then, if you will obey Me faithfully and keep My covenant, you shall be My treasured possession among all the peoples. Indeed, all the earth is Mine, 6] but you shall be to Me a kingdom of priests and a holy nation.’ These are the words that you shall speak to the children of Israel.”

7] Moses came and summoned the elders of the people and put before them all that the Eternal had commanded him. 8] All those assembled answered as one, saying, “All that the Eternal has spoken we will do!” And Moses brought back the people’s words to the Eternal. 9] And the Eternal One said to Moses, “I will come to you in a thick cloud, in order that the people may hear when I speak with you and so trust you ever after.” Then Moses reported the people’s words to the Eternal, 10] and the Eternal said to Moses, “Go to the people and warn them to stay pure today and tomorrow. Let them wash their clothes. 11] Let them be ready for the third day; for on the third day the Eternal will come down, in the sight of all the people, on Mount Sinai. 12] You shall set bounds for the people round about, saying, ‘Beware of going up the mountain or touching the border of it. Whoever touches the mountain shall be put to death 13] without being touched—by being either stoned or shot; beast or person, a trespasser shall not live.’ When the ram’s horn sounds a long blast, they may go up on the mountain.”

14] Moses came down from the mountain to the people and warned the people to stay pure, and they washed their clothes. 15] And he said to the people, “Be ready for the third day: [the men among] you should not go near a woman.”

16] On the third day, as morning dawned, there was thunder, and lightning, and a dense cloud upon the mountain, and a very loud blast of the horn; and all the people who were in the camp trembled. 17] Moses led the people out of the camp toward God, and they took their places at the foot of the mountain.

18] Now Mount Sinai was all in smoke, for the Eternal had come down upon it in fire; the smoke rose like the smoke of a kiln, and the whole mountain trembled violently. 19] The blare of the horn grew louder and louder. As Moses spoke, God answered him in thunder. 20] The Eternal came down upon Mount Sinai, on the top of the mountain, and the Eternal One called Moses to the top of the mountain and Moses went up. 21] The Eternal One said to Moses, “Go down, warn the people not to break through to the Eternal to gaze, lest many of them perish. 22] The priests also, who come near the Eternal, must stay pure, lest the Eternal break out against them.” 23] But Moses said to the Eternal, “The people cannot come up to Mount Sinai, for You warned us saying, ‘Set bounds about the mountain and sanctify it.’” 24] So the Eternal said to him, “Go down, and come back together with Aaron; but let not the priests or the people break through to come up to the Eternal, lest [God] break out against them.” 25] And Moses went down to the people and spoke to them.

2] I the Eternal am your God who brought you out of the land of Egypt, the house of bondage: 3] You shall have no other gods besides Me.

4] You shall not make for yourself a sculptured image, or any likeness of what is in the heavens above, or on the earth below, or in the waters under the earth. 5] You shall not bow down to them or serve them. For I the Eternal your God am an impassioned God, visiting the guilt of the parents upon the children, upon the third and upon the fourth generations of those who reject Me, 6] but showing kindness to the thousandth generation of those who love Me and keep My commandments.

8] Remember the sabbath day and keep it holy. 9] Six days you shall labor and do all your work, 10] but the seventh day is a sabbath of the Eternal your God: you shall not do any work—you, your son or daughter, your male or female slave, or your cattle, or the stranger who is within your settlements. 11] For in six days the Eternal made heaven and earth and sea—and all that is in them—and then rested on the seventh day; therefore the Eternal blessed the sabbath day and hallowed it.

12] Honor your father and your mother, that you may long endure on the land that the Eternal your God is assigning to you.

15] All the people witnessed the thunder and lightning, the blare of the horn and the mountain smoking; and when the people saw it, they fell back and stood at a distance. 16] “You speak to us,” they said to Moses, “and we will obey; but let not God speak to us, lest we die.” 17] Moses answered the people, “Be not afraid; for God has come only in order to test you, and in order that the fear of God may be ever with you, so that you do not go astray.” 18] So the people remained at a distance, while Moses approached the thick cloud where God was.

19] The Eternal One said to Moses:

Thus shall you say to the Israelites: You yourselves saw that I spoke to you from the very heavens: 20] With Me, therefore, you shall not make any gods of silver, nor shall you make for yourselves any gods of gold. 21] Make for Me an altar of earth and sacrifice on it your burnt offerings and your sacrifices of well-being, your sheep and your oxen; in every place where I cause My name to be mentioned I will come to you and bless you. 22] And if you make for Me an altar of stones, do not build it of hewn stones; for by wielding your tool upon them you have profaned them. 23] Do not ascend My altar by steps, that your nakedness may not be exposed upon it.