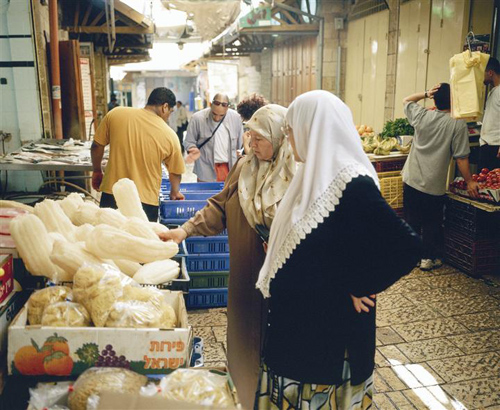 In Israel, the term "mixed cities" usually refers to five cities: Akko (Acre), Haifa, Jaffa (the southern quarter of Tel Aviv), Ramle, and Lod. However, the Central Bureau of Statistics defines "mixed cities" as localities in which the decisive majority of the population is Jewish but which have a sizeable minority of Arab residents. The term also refers to Ma'alotTarshiha (a joint municipality of the Jewish settlement of Ma'alot and the Arab village of Tarshiha) and Upper Nazareth, both located in the Galilee in Northern Israel. 8% of Israeli Arabs live in mixed cities and villages.

Unfortunately, like many of the primarily Arab cities in Israel, the mixed cities suffer from social, economic and planning shortcomings. The socioeconomic status of the Arab residents living in these cities is lower than the national average for Israeli Arabs. The "Rakevet [Railway] Neighborhood" in Lod was nicknamed "Israel's garbage can." In other mixed cities, such as Akko and Ramle, crime, delinquency and incidents of violence are high. In several of the mixed cities, municipal services are in a state of collapse, and police have begun to take over the job of providing welfare assistance. Education services suffer, and dropout and illiteracy rates are high. Housing is crowded, illegal construction is prevalent, and there is not enough housing for young couples.

Mixed cities have been traditionally viewed as oases of coexistence and shared life, and efforts are being made to create a more positive environment for those who choose to live there. Municipal bodies, non-governmental organizations, and intervention projects such as Tel Aviv University's Price-Brodie Initiative in Jaffa are evidence of dynamic efforts at urban renewal and rehabilitation. One non-governmental organization operating in this field is the Civic Accord Forum, an advocacy group which aims at building a just and equal relationship among Israel's Jewish and Arab citizens. Another active organization is Shatil, a Jewish-Arab NGO which aims to lead social change in mixed cities, such as Ramle, Lydda, Jaffa and Akko. One of the most prominent popular features of coexistence is joint events and festivals, some of which have been held annually for several years. In Haifa, celebrations of "Holiday of the Holidays" are traditionally held in the Jewish-Arab neighborhood of Wadi Nisnas during the Jewish holiday of Hanukkah, which coincides with the Christian Christmas and the Muslim Eid el-Adha (Festival of Sacrifice).

In addition, some positive signs are evident at the governmental level. A Knesset lobby for mixed cities was headed by MK Nadia Hilo, member of the Labor-Meimad coalition party and resident of Jaffa. In July 2008, the Knesset's Internal Affairs Committee called on the government to establish an inter-ministerial unit to assist mixed Arab-Jewish cities. MK Michael Melchior (Labor-Meimad) admitted that mixed cities are currently focal points of problems. However, he hoped that "the establishment of a unit, whose activities will be dedicated to these cities, whether on the governmental or municipal level, will turn them into focal points for building lives together."