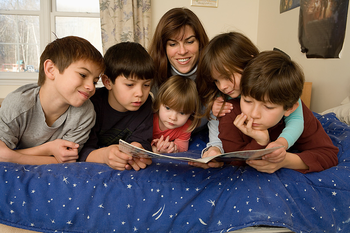 If ever there were a story filled with drama and magic and mystery and miracles, it’s the story of how our people fled slavery in Egypt in search of freedom and the Promised Land!

Passover is our festival of freedom, when we remember the plight of our enslaved Israelite ancestors and their escape from Egypt. On the first and (oftentimes) second night of Passover, we gather together for a special meal called the “seder.” Seder is the Hebrew word for “order,” and we follow that order in the haggadah (our Passover service booklet). During the seder, we read, sing, and act out a 15-step service of prayers, blessings, and rituals, all of which help us tell the story of our ancestors’ Exodus, or departure, from Egypt.

Our story begins millennia ago, when Jacob’s son Joseph arrived in Egypt. Though he entered Egypt a poor servant, he was soon singled out for his cleverness, his wisdom, and his ability to interpret dreams. He ascended to one of the highest positions in all of Egypt, helping Pharaoh govern the Egyptian people. Joseph’s family soon joined him in Egypt, as did many, many Israelites. The Israelites prospered, and they multiplied.

Generations went by, and a new Pharaoh arose in Egypt. This Pharaoh did not like the Israelites. They were too “numerous” for him, and he felt deeply threatened. Pharaoh treated the Israelites very harshly; they worked all day and all night in awful conditions. They had become the Pharaoh’s slaves, and they were suffering most terribly under his oppressive rule. And yet, still, they managed to survive and even increase in numbers.

Dismayed and disturbed, the Pharaoh took action against the Israelites. He declared that all sons born to Hebrew women must be killed. But two brave Hebrew midwives, Shifrah and Puah, defied the Pharaoh’s decree. They could not hurt any baby they helped bring into the world.

Another courageous woman, by the name of Yocheved, also gave birth to a son. She decided to place him in a basket and put the basket in the river Nile, near the place where people came to bathe. Her baby was found by none other than the Pharoah’s daughter, who scooped him up and raised him as her own. She named the baby Moses, meaning “drawn from the water” – and in need of a wet nurse, Pharaoh’s daughter asked, of all people, Moses’ birth mother, Yocheved, to fill the position. Moses grew up well loved in the palace of the Pharaoh.

As Moses got older, though he began to recognize the oppression of his people. When he witnessed an Egyptian taskmaster beating a Hebrew slave, Moses killed the taskmaster. Realizing what he had done, Moses fled the palace and ended up in Midian, where he got married and became a shepherd. One day, while guiding his flock, Moses came upon a curious sight; it was a burning bush, but the bush would not be consumed. It wasn’t burning up! There, God spoke to Moses saying that he, along with his brother Aaron, would be the one to take the Israelites out of Egypt. Unsure of himself and his abilities as a leader, Moses questioned God’s decision, but God knew Moses was the right person for the job.

Moses then returned to Egypt, where and Aaron approached the Pharaoh. Moses spoke the famous words, “Let my people go!” but Pharaoh answered, “No!” Moses assured Pharaoh that God would send punishments if Pharaoh did not relent. And so began a forceful and frightening campaign of plagues that God sent upon Pharaoh and the Egyptian people.

There were 10 plagues in total: blood, frogs, lice, wild beasts, diseases, boils, hail, locusts, darkness, and the most severe of all, the death of every Egyptian first-born son. In order to protect the Israelite children from the Angel of Death, the Israelites marked their doors with lamb’s blood, so that their houses would be passed over (hence the holiday name, “Passover”). With every plague, Pharaoh hardened his heart more and more. But with that final, fatal blow, Pharaoh surrendered and ordered the Israelites to leave Egypt.

We are taught that the Israelites were in such a hurry to leave Egypt that their bread had no time to rise. That’s why we eat the unleavened bread, called matzah – in remembrance of their hasty, harrowing escape.

But no sooner did the Israelites leave Egypt than the Pharaoh changed his mind. Pharaoh immediately sent his armies after the Israelites. They were gaining on them with every minute that passed! The Israelites fled as fast as they could. But they soon reached a great body of water.

With the sea in front of them and Pharaoh’s armies behind them, they would surely perish!

The Israelites cried out to God, and, miraculously, God heard them. With an outstretched arm, God parted the sea in front of them. The Israelites walked through the body of water on dry land! As soon as they passed through, the sea closed up, saving our people from the hands of the Egyptians and beginning the Israelites’ epic journey to the Promised Land.

Rabbi Sara Y. Sapadin is a rabbi and mother of four. Ordained by HUC-JIR, Sara currently serves Temple Emanu-El in New York City, as an adjunct rabbi. Sara has written for a number of Jewish publications and is also a proud contributor to The Sacred Calling: Four Decades of Women in the Rabbinate (CCAR Press). She, her husband Danny, and their children reside in New York City, where they are raising their dog to be Jewish.