Chicken soup has been an icon of the Jewish table since early medieval times. Its presence defined the Shabbat table, and a Jewish wedding feast symbolically started with the soup. As far as the curative powers of chicken soup, studies conducted at the University of Nebraska Medical School identified some properties in chicken soup with vegetables that suggests it has an anti-inflammatory effect on our bodies that helps lessen the symptoms of the common cold. Moses Maimonides, the great scholar and physician of the twelfth century, prescribed chicken soup to the weak and the infirm in one of his medical writings, and this was thought to be based on earlier Greek texts.

This is the way my mother taught me to make chicken soup. She always used fresh dill. My friend Leslie’s mom always used thyme. Neither one was wrong. Each had her own tradition.

For Passover, serve this soup with matzah balls (kneidlach).

Ingredients
One 4- to 5-pound fowl or yearling (soup chicken)—a roaster will do
5 quarts water or water to cover
1 parsnip, peeled and cut into thirds
1 large onion, peeled but left whole
1 turnip, peeled and cut into quarters
2 stalks celery with leaves, cut into thirds
3 or more carrots, peeled and sliced into 1-inch lengths
Fresh dill, 3 or more sprigs to taste
Fresh parsley, 2 sprigs or more if parsnip isn’t being used
Salt and pepper to taste
Kreplach or matzah balls (optional; recipe links below)
Directions 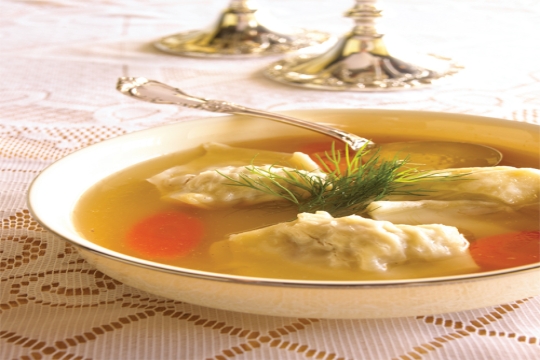