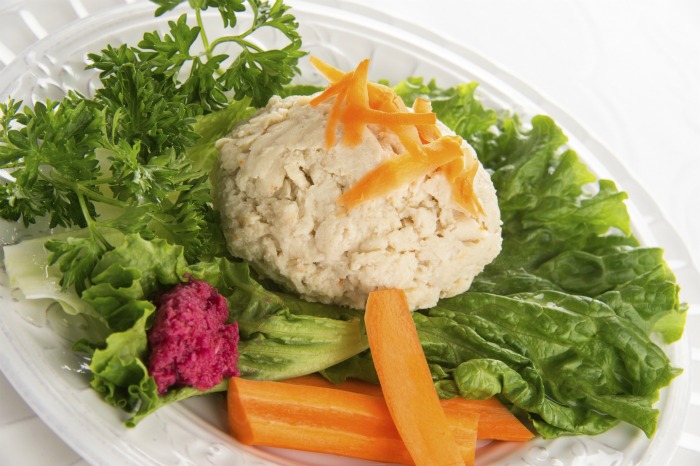 Fish has always been a primary ingredient in Jewish cookery because it was plentiful, easy to prepare, and symbolized fertility and prosperity. And gefilte fish has long been the most iconic fish dish in Jewish homes.

The creation of gefilte fish-"gefullte" in German means stuffed-can be traced to Franco-German kitchens in the late 14th century. Serving deboned and ground fish, stuffed into fish skin and then baked, made it possible to place fish on the Shabbat menu. Removing the bones ahead of time eliminated the problem of working on the Sabbath. Any available fish that had fins and scales could be used, but when carp was introduced to Western Europe from China in the 15th century, Jews readily adapted this fish to their cuisine. Raised easily in freshwater tanks, carp was plentiful and very inexpensive. Though popular among all classes, carp became associated with the poor. In time, flavorful, readily available, and easily deboned carp became the Jewish community's fish of choice for making gefilte fish.

We don't know when cooks shifted from baked or poached ground fish stuffed in skin to oval balls of ground fish poached in a seasoned fish stock, but the reason for these modifications likely had to do with ease of preparation. And although the stuffing technique has long been abandoned, the name, gefilte fish, lives on.

Shortly after World War II, gefilte fish was processed in jars and sold in supermarkets. Manischewitz opened its first factory in 1954 for this purpose. Many cooks resisted this new product and continued to make their fish balls from scratch. Some cooks preferred to use pre-ground, frozen fish to make loaves of gefilte fish; others cooked fresh carrots and onions with the fish jelly from the jar to mimic homemade.

One gefilte fish tradition has survived the centuries: seasoning preference. Jews from Western Europe, Southeastern Poland, and Western Ukraine tend to prefer a sweetened gefilte fish, whereas for most Lithuanian and Russian Jews, pepper is the seasoning of choice.

However, and whenever, you choose to enjoy this iconic dish-baked, poached, or packaged-know that you are keeping alive a centuries-old tradition.