Latkes — potato pancakes — are generally made by standing over a hot stove, grease sputtering and popping, and frying the cakes 2 or 3 at a time. It's a long, labor-intensive process. Here's a better method: bake them in the oven, so you can serve a dozen hot latkes, all at once, with very little effort.

In addition, latkes are traditionally made with raw grated potatoes, squeezed dry in a towel or pressed in a colander to remove their liquid. Here's an easier method: cook the potatoes first, then put them through a potato ricer. Gently combine with the remaining ingredients, bake, and you'll make latkes that are crispy-crunchy outside, and soft within.

And homemade applesauce doesn't mean standing over a hot stove, either. Simply core apples (peels on or off; your choice); microwave till soft; mash; and sweeten to taste. The combination of sweet applesauce and salty latkes simply can't be beat. Enjoy! 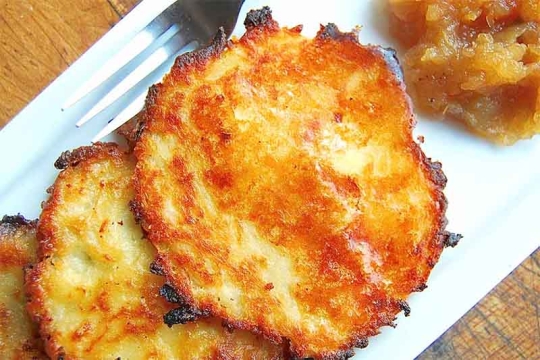