What if Anne Frank had survived the Holocaust?

David R. Gillham’s Annelies: A Novel  (Viking and Penguin Books) is a fictionalized portrayal of Anne Frank based on the premise that she recovers from her illness in Bergen-Belsen, returns to post-war Amsterdam, and is reunited with her father, Otto, whom she calls Pim.

Anne (Annelies in German) and Pim, the only other survivor of her family, immediately find themselves in conflict. Otto wants to “move on” with life, but Anne, mired in memories of the past, is incapable of doing so and obsessively clings to the past.

Overcome with survivor’s guilt, she is haunted by the ghost of her sister Margot, whose death in Bergen-Belsen she believes she caused, and with whom she carries on often-painful imaginary conversations. In her memory, she also relives the arguments and antagonistic relationship she had with her mother.

Otto wants to recapture and retain control over the young girl he nearly lost. He still thinks of her as a child, but over the course of the year (1946), he realizes he must not stand in the way of Anne’s desire to start a new life – even if in America. “Amsterdam is a haunted place,” she tells him, “I don’t belong here anymore.”

Daring, searching, and intellectually gifted beyond her years, Anne wants to become the person she believes she is destined to become.

In his fictionalization of Anne’s post-Holocaust life, Gillham fully explores and stays true to the complex personality of the girl we know from her famous diary. Along the way, he raises important questions. Yes, Anne is alive, but can she survive her trauma? If so, what kind of “survival” will it be? Can she cope with survival guilt?

Can she resolve her conflicts with Pim and not resent him for soon re-marrying, which she regards as a betrayal of her mother? Will Anne become the famous writer she longs to be, fulfilling the promise of her great writing talent? Can Anne ever trust again? Can she forgive?

After the horrors Anne experienced, does she still agree with her famous life-affirming statement in her diary: “In spite of everything, I still believe that people are really good at heart.  I simply can’t build up my hopes on a foundation consisting of confusion, misery, and death.”

Gillham begins the book by reconstructing the Franks’ life and family dynamics in Amsterdam before they go into hiding.

He combines extensive historical research and what we know from her diary with imagined events and conversations. He then chooses a few entries from her actual diary as the group hides in the rooms behind Otto Frank’s business office and reconstructs those experiences. He imagines her ordeal in Nazi captivity from accounts of others who knew Anne in the concentration camps.

I was fully drawn into the story at the point when Anne returns to post-war Amsterdam. In addition to wondering if and how Anne can triumph over her past, I was caught up in practical questions enriching the story: How can Anne relate to people who did not share her experiences?  Can she have “normal” romantic relationships? How will she deal with her growing sexual desires? Who, as Anne wants to know, betrayed them by tipping off the Nazis about the hiding place? (Gillham notes that this is still an unresolved question) She also wonders: What happened to her diary – and would it ever be published?

This is a tough but rewarding read. Gillham not only captures Anne’s wrenching emotional journey, he explores the hardships residents of Amsterdam (indeed, all of Europe) endured as they struggled to recover from the war and Nazi occupation.

Knowing Anne’s true fate, we once again mourn the loss of this brilliant young girl, only one among the millions whose futures were stolen from them and from us. 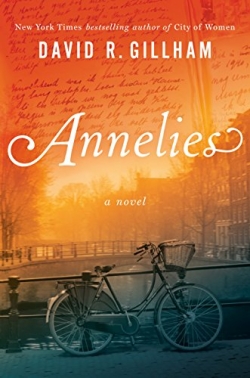