Book Review: Could The Solution to Today’s Problems Be More Arguing, Not Less?

Much has been written these days about growing polarization in American life. One hears of school board meetings devolving into shouting matches, neighbors squabbling over political yard signs, and families torn apart in the comments of a politically charged Facebook post. Into the fray comes a slender volume from two Jewish educators paradoxically seeking to create more, not fewer, arguments.

Stories for the Sake of Argument, by Abi Dauber Sterne and Robbie Gringras, is filled with short stories designed to spur family members or groups to engage in healthy disagreement on hot button issues.

Sterne and Gringras both reside in Israel, and the book is written from their perspective. Each chapter has a story highlighting a contentious topic. Stories fall into three categories: Warm-Ups, which are more appropriate for younger members; Israel, which deals with specific issues pertaining to Israel; and Allegory, which are stories with multiple layers, usually alluding to a larger, real-life conflict. This book is not meant to be read quietly to oneself, but rather to be presented in a group setting and read aloud to eager participants.

In Judaism, there is a tradition of disagreement that stems from the Talmud. The School of Shammai and the School of Hillel disagreed on almost everything, but both their points of view are preserved in the Talmud. The idea that two sides of an issue have enough validity to exist alongside one other into perpetuity is stridently Jewish - so long as the opinion doesn't infringe on someone else's autonomy or right to exist. In this same tradition, Sterne and Gringras seem to be asking us to engage one another in the arena of collegial debate.

Some stories are very Israeli, like the grandmother living alone in Haifa, who no longer wants her granddaughter to travel by bus on Shabbat to see her. Haifa is the only city in Israel where public transportation runs on the Jewish Sabbath. The question is whether the granddaughter must honor her grandmother's request or whether she can refuse, as she's already traveling a great distance to see her. While this appears to be a very particular examination of a Jewish-Israeli issue, the expectation of familial deference and bending to a respected elder's wishes is age-old. In most cases, whatever category the story falls into, it brings out deeply felt convictions of one kind or another.

Immigration, racism, the question of whose land you're on, protest during the national anthem - all of these are covered in various ways and representative of issues with which Americans and Israelis alike grapple. Even one of the most contentious issues of our time, COVID, is explored in the tale of twin sisters, one of whom will not get vaccinated, the other insisting everyone at her wedding has their vaccine card. These issues aren't easy, but they're presented in an accessible, empathetic, and thoughtful manner.

The real question is whether the aims of the authors can be achieved with this "storybook." Without saying it, a book that encourages its audience to argue suggests that the participants may be out of practice. Each chapter has a story, background information for context, and questions to prompt debate. Participants are asked to sleep on it and then consider if their opinion has changed. If we've forgotten how to disagree effectively, then Stories for the Sake of Argument provides a roadmap to better debate by helping us clarify our own positions while gaining better insight into opposing ones.

The authors of Stories for the Sake of Argument hope to create citizens more skilled in earnest disagreement and reduce incidents where one tries to shout at the other into silence. In effect, they are continuing the Talmudic tradition of building a better world with more heavenly arguments. 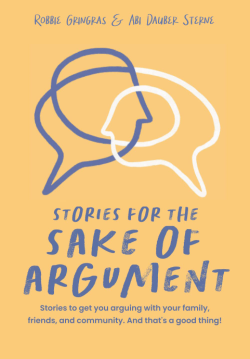