Bolivia admitted approximately 10,000 Holocaust era Jewish refugees, many of them artists and musicians who settled in of La Paz, the capital city situated 12,000 feet above sea level in the Andes Mountains. Jennifer Steil discovered their largely untold story in 2012, when her husband, a European Union diplomat was posted there.

In researching the subject of her novel, Exile Music (Viking), Steil drew on interviews with survivors and their descendants. The story is narrated by Orly Zingel, who, at age 11, journeys with her parents from Vienna to Genoa to Chile and finally to La Paz, leaving behind her older brother, Willi.

Exhausted from their long journey, these grieving Jewish refugees faced illness from the high altitude. They had to adapt to a foreign language and culture, and they missed the Austrian foods, art, and music to which they were accustomed.

So much of being in this new place was observation. I didn’t know how anything in this world worked; I had to watch how Bolivians moved and talked and played, so I could relearn everything. My mother and father and I were like children again, not understanding how to buy food, what it should cost, how to greet a stranger, or where to find soap. Here, all my Austrian impulses were wrong. Every day I found myself in a culturally coded world without the key.

As the novel’s title suggests, music plays a major role in the story.

The absence of their former rich musical tradition symbolizes the life they left behind. Orly’s father, Jakob, had been a violist in the Vienna Philharmonic, and her mother, Julia, a renowned opera singer. Jakob finds consolation in playing his viola alone and in ensemble groups and by taking on students. Julia refuses to sing and is unable or unwilling to move on and build a new life.

Some of the most moving passages in the novel deal with how Jewish members of the Vienna Philharmonic were treated by the other musicians. Looking back on that time, Orly says:

Close to half of his colleagues eventually became Nazis…There is no record of any musician in the orchestra every protesting the expulsion of his Jewish colleagues. These men who had played alongside Jews for decades…were the men now calling for their exile. For their deaths.

Rounding out this well-structured novel, adult Orly, now a mother married to her childhood friend Miquel, must choose between her two lives when Anneliese, the friend she left behind in Austria, appears in La Paz and begs her to return to Europe so they can live out their childhood love.

How can you recover from devastating loss of loved ones and of everything from your past life? How can you rebuild your life in an unfamiliar culture? How can you move on from a traumatic past? These are questions Steil ponders through her vivid protagonist in this enthralling and brilliantly written novel. 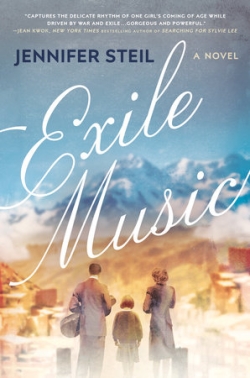