A widely believed myth is that Adolf Hitler was a unique personal aberration in history and his Nazi movement with its reign of terror was a one and done occurrence that lacked any real foundational ideology.

Such a belief is not only false, but is dangerous thinking argues Robert Gellately in his new book Hitler’s True Believers: How Ordinary People Became Nazis (Oxford University Press).

Gellately, a Florida State University history professor, describes in 428 carefully researched pages how Hitler cunningly drew upon three “preexisting conditions” within the German body politic to first legally gain political power in 1933 and then quickly move to bend the overwhelming majority of Germans to his will.

The weak and little-loved post-WWI Weimar Republic provided few democratic “guardrails” during Hitler’s rise to power. Gellately argues that three long extant forces in Germany – rabid nationalism, a right-wing form of socialism, and virulent antisemitism – paved the path for Hitler’s rise to power. Each force was deeply embedded within pre-Nazi German life and was systematically weaponized by Hitler.

In addition, millions of Germans believed historical destiny required the seizure of a large amount of lebensraum (living space) to achieve national fulfillment and greatness. Such expansion meant conquering lands to the east, especially Poland and the vast Soviet Union, inhabited by “inferior” Slavic racial types along with millions of “sub human Ostjuden” (Eastern European Jews) – people that needed to be enslaved or exterminated to make room for “Aryan” German colonization.

In his political thinking, Hitler admired the example of U.S. President Andrew Jackson, who in the 1830s denounced Native American tribes as “inferiors” and expelled them from their ancestral homes in Florida and other southern states to allow white settlement.

Although German Chancellor Otto von Bismarck had introduced socialist public programs in the 19th century, Hitler’s concept of socialism was captured in the German word volksgemeinschaft , which Gellately translates as a special “community of people,” a concept that perfectly melded into German nationalism. This long-held principle made it easier for Hitler to centralize under state control all aspects of society – political, economic, cultural, military, judicial, legislative, media, labor, sports, manufacturing, and educational – all part of the national socialist “community of people.”

The third deeply held belief was a pernicious, often-brutal antisemitism. In 1933, German Jews numbered about 500,000 less than one percent of the general population. Yet, Hitler did not have to introduce his adoring followers to the concept of Jews as a “pestilence that had falsified and poisoned the national social idea.”

Gellately notes that early on, in the mid-1920s, Hitler tapped into the latent antisemitism that existed in Germany.

The future fuhrer wrote in his book, Mein Kampf, that during WWI, it would have been better “…to hold twelve or fifteen thousand of these Hebrew corrupters of the people under poison gas, as happened to hundreds of thousands of our very best German workers” on the field of battle.

Gellately consistently makes the point that much of German society was not simply duped or collectively hypnotized by Hitler’s fiery oratory; the massive public pageants of power of red, white, and black flags; parades of jackbooted soldiers; the construction of autobahn highways; or the easy acquisition of a Volkswagen (people’s car).

Once in power, Hitler used violence and total control of the media to consolidate his grip on society, but the ideologies of nationalism, volksgemeinschaft, and antisemitism did not need to be invented. They were always there waiting to be manipulated by a “necessary leader” who promised to restore Germany’s lost “greatness.”

To become that “necessary leader,” Hitler needed to overthrow the Weimar Republic, along with Germany’s encrusted old aristocracy of elites. He succeeded, in part, by promising to avenge the nation’s humiliating defeat in WWI, and he would, in his singular personhood, deftly weave together a collective sense of social solidarity and “German exceptionalism,” buttressed by hatred of the age-old “other” – the Jew.

In April 1938, a year and a half before the start of WWII, Victor Klemperer, a Jewish university professor in Dresden, clearly understood the desperate status of Jews in Nazi Germany:

“How deeply Hitler’s attitudes are rooted in the German people, how good the preparations were for his Aryan doctrine, how unbelievably have I deceived myself my whole lifelong, when I imagined myself to belong to Germany, and how completely homeless I am.”

Gellately concludes by noting that “…Even the German enemies of Nazism admitted that there were many millions…who continued to believe in the National Socialist [Nazi] Idea and Hitler’s mission;” nor was the regime “…remotely threatened by collapse or betrayal from within” until the “necessary leader” died by suicide and the Third Reich’s military was defeated in the fateful spring of 1945.

Rabbi A. James Rudin is the former head of the American Jewish Committee’s Department of Interreligious Affairs and author of seven books, most recently Pillar of Fire: A Biography of Rabbi Stephen S. Wise. He served as a U.S. Air Force chaplain in Japan and Korea. 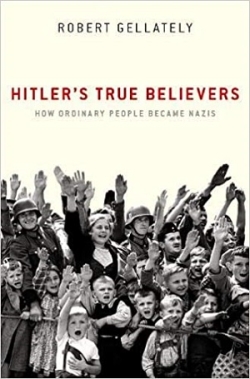