Book Review: The Israeli-Palestinian Conflict: What Everyone Needs to Know

The title of Professor Dov Waxman’s new book, The Israeli-Palestinian Conflict: What Everyone Needs to Know, hides an important tension that gets explained in the course of reading this book, which addresses a most complex and confusing topic.

The conflict is not unitary. The make-up of the two sides has changed over time. From 1948-1972, it was known as the "Arab-Israeli” conflict. It involved the entire region and was not solely focused on the Palestinian question; the surrounding Arab states had territorial goals as well.

Today, Israel and two of her neighbors – Egypt and Jordan – have peace treaties; the country has warmer relations with Saudi Arabia and enjoys lesser threats from the unstable Lebanon and Syria. But the thread throughout is the conflict between the peoples now called Israelis and the Palestinians within the area defined by Israel and the areas it took control over in the Six-Day War in 1967.

The reason for the book is addressed by many other books on the market, “…the Israeli-Palestinian conflict has captured the world’s attention. But …is still poorly understood.” Furthermore, Waxman’s two-fold explanation of the problem is not new: there is the simplification that comes from the tendency to take one side or the other (politicization) and the reliance on the media (sometimes biased) that focuses on current events superficially.

What Waxman does, which I have seen no other book do so well, is to give access into the complexity by bolstering his analysis in just the right amount of detail. This accessibility is also aided by the format, which is designed to be understood by non-expert readers. Instead of a strictly chronological approach, he embeds chronology into themed-chapters, which are divided into questions and answers. From years of teaching and researching, Waxman surely knows this conflict’s FAQs.

Another aspect of this book that I found enormously helpful is the way he answers the questions from four different perspectives, carefully shifting among them. First, there’s Waxman the teacher and academic who describes the background. Then, for each question, he gives voice to how various sides and players understand things. Finally, Waxman, the political scientist, provides a sobering analysis about how the conflict could be resolved, which avowedly differs (in part) from the two-state solution that gets the most attention here in the U.S. In the last chapter, “Conclusion: The Long Path to Peace,” he closes his analysis of how each side contributed (maybe, not equally – readers can judge for themselves) to the distancing from the promise of the Oslo Accords from the early 90s until today.

In the concluding chapter, Waxman asks three questions: “Is a two-state solution still possible?” “Is a one-state solution possible?” and “If neither solution is possible, then how can the conflict be resolved or at least reduced?”  Spoiler alert: Waxman’s read of current trends and facts on the ground lead him to see the most hope in some sort of hybrid answer to the first two questions: one confederation of two states – an approach that is, in fact, being worked on by the grassroots movement of a diverse group of Israelis and Palestinians. Known as Two States, One Homeland, the initiative, to date, has identified, and is developing, eight principles that lay out a road map to territorial conflict resolution that would insure that all residents would enjoy the rights and freedoms of living in a democracy.

One of my favorite chapters. “The Peace Process,” opens with a historical description that Waxman, I think, uses to remind us that conflict didn’t have to be inevitable, and that it could even today turn around:

When was the first attempt to make peace?

Attempts to make peace between Arabs and Jews date back to the beginning of their conflict over Palestine a century ago, before it turned violent. The first attempt involved Chaim Weizmann, the head of the Zionist Organization (who later became Israel’s first president), and Emir Faisal bin Hussein, son of the Hashemite leader and king of Hejaz Sharif Hussein bin Ali (Faisal later became king of the short-lived Arab kingdom of Syria and then king of Iraq). The two men met twice shortly before and after the end of World War I in an effort to promote cooperation between Zionists and Arab nationalists to advance both sides’ national aspirations. On January 3, 1919, just before the Paris Peace Conference took place, they signed an agreement in which Faisal accepted the Balfour Declaration and the development of the Jewish homeland in Palestine in return for Zionist support for an independent Arab kingdom in a large part of the Middle East. Faisal, however, stipulated that he would only honor the agreement if the Arabs gained their independence. Arab hopes for statehood were soon dashed by French and British colonialism in the region, so the agreement never went into effect.;

This paragraph should also make us think about the role of outside players in bringing the two sides back to the table. In the end, it will be up to Israelis and Palestinians themselves to one day see their children grow up in peace.

Rabbi Reuven Greenvald is the director of Israel engagement at the Union for Reform Judaism. His prior experience in re-thinking Israel engagement comes from work on innovative initiatives in the North American program of the Jewish Agency for Israel. 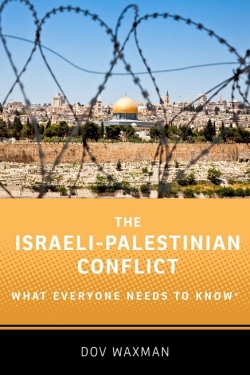