The Lost Shtetl is a debut novel rich with whimsy and heart – but first, prepare to suspend your disbelief.

When you do, you’ll settle in for an absorbing tale of a shtetl called Kreskol, located in a remote area of Poland so secluded that it avoided Nazi detection. Separated from civilization by miles and miles of dense forest, Kreskol was insulated from external events, such as the Holocaust, World War II, and the Cold War. Except for the occasional visit by a caravan of gypsies, the shtetl is in an existential bubble.

This bubble might not have burst were it not for the unhappy marriage of bickering Pesha and Ishmael Lindauer. Pesha alleges Ishmael is abusive; Ishmael claims Pesha is not performing her wifely duties. After months of discord and village gossip about who is at fault, the rabbis grant Pesha a divorce. No one, however, expects her to then vanish.

Her disappearance is cause for alarm:

“Few townspeople ever roved deep into the forest that lay beyond the town walls; once or twice a decade an unhappy widower or an adventurous youth would make the journey without telling anyone, and, to a man, they were never heard from again … the consensus was that leaving Kreskol was a decision not dissimilar to suicide.”

When her ex-husband disappears, as well, the people of Kreskol fear that a murder has been or is about to be committed, compelling the rabbis to send Yankel Lewinkopf, the baker’s apprentice, to Smolksie “to get the gentile authorities involved.” Escorted by a caravan, Yankel leaves Kreskol and a century of isolation behind. Upon reaching the Polish city, he is thrust into the modern-day world.

“And as he took his first few steps along the sidewalk, like a newborn infant encountering the fully formed worlds for the first time, Yankel had the sensation he got late in the night on Purim, when he had forgotten how many glasses of vodka he’d drunk, and the room suddenly spun free from its earthly moorings.”

Suspected at first of being a vagrant or criminal and ultimately of being mentally unwell, due to his ragged look and inability to communicate, Yankel is committed for three months to a psychiatric ward. When his therapists finally ascertain that he is not delusional – that Kreskol actually exists – city officials travel by helicopter to Kreskol to see this undiscovered town for themselves. Their culture shock upon arrival is just as striking as Yankel’s had been in Smolskie.

In short order, the Polish bureaucracy modernizes Kreskol with a post office, paved streets, electricity, and socialized medicine. The residents mutter about the changes, especially the imposed taxes, but nothing causes more pushback than the mandatory money exchange from the old to new currency; one faction complies and the other flatly refuses. Tensions grow among the residents, some embracing change with others clinging to the old-ways:

“Two separate Kreskols emerged. One grew wealthy. The other grew poor. The poor sneered as they walked past their neighbors. They gritted their teeth. They stopped having anything to do with any of the rabbis of the beit din beit dinבֵּית דִּיןHebrew for "house of judgment", a beit din is a rabbinical court that has jurisdiction in matters of Jewish law.   (except Rabbi Katznelson, who never changed his savings) and attended smaller, more fanatical shuls. Kreskol was never the same.”

Amidst all the tumult, Yankel sets off to resume his search for Pesha.

You could say this novel is a nod to Sholom Aleichem’s world, with a splash of Brigadoon and a sprinkling of Michael Chabon’s The Yiddish Policeman’s Union – but that still doesn’t do justice to the wondrous, fantastical universe Gross has created with his gift for imagination and storytelling. With themes of antisemitism, love, sex, social and economic inequities, loss, and intrareligious divisions, this novel is not only a delight to read but ripe for discussion on many levels. 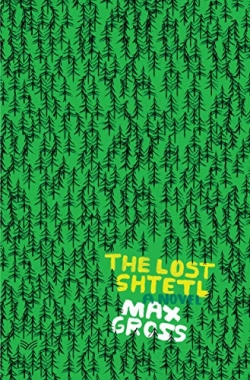