Martin Buber: A Life of Faith and Dissent

An apocryphal story describes how children in Jerusalem would yell “Elohim! Elohim!” (God! God!) when they saw Martin Buber (1878-1965) with his full “silken white beard.” According to the account, Buber smiled at the adoring youngsters and said,” Yes!”

In his highly readable and concise biography – Martin Buber: A Life of Faith and Dissent (Yale University Press) – of the famous philosopher, Paul Mendes-Flohr, chief editor of the 22-volume German language collection of Buber’s works, described him as a man who championed “a life of dialogue” and taught that “all real living is meeting.”

At his birth in Vienna, “faulty obstetric forceps” left Martin with an “embarrassingly twisted lower lip” (as an adult he made certain to cover much of his “deformed” mouth with a beard). His mother “eloped” with a Russian officer and abandoned her son at age three. Buber later recalled how he looked out a window and “tried desperately to catch his mother’s attention, but she disappeared over the horizon without looking back.”

Shortly after Hitler’s seizure of power, a still traumatized German Jewish community asked Buber how they could withstand the Nazi assault. His response: “…It depends on us whether we can say (to our children) and to ourselves… ‘Don’t worry. Mother is here.’”

After his parents’ marriage was annulled by a rabbinic court, Martin’s grandparents, Adele and Salomon Buber, took custody of the boy in Lemberg (today’s Ukrainian city of Lviv). Salomon was a Jewish scholar and a wealthy businessman, a fortunate combination that provided young Buber with economic security and an intensive involvement in Jewish life, liturgy, and literature (especially the Chasidic tradition). In fact, his grandfather provided much of the source material for Martin Buber’s popular series, Tales of the Hasidim.

In 1899, Buber married Paula Winkler, a Bavarian Catholic woman and talented author. She converted to Judaism and the couple had a son and a daughter.

Buber became an ardent Zionist, and in 1902 was chosen by Theodor Herzl to edit Die Welt (The World), the leading Zionist publication. After only a year, Buber, a “cultural Zionist,” rejected Herzl’s nationalist goal of a Jewish state in favor of what he termed “Hebrew humanism” – a movement that emphasized Jewish spiritual and social growth. He advocated the creation of a bi-national state of Jews and Arabs, a concept both sides rejected. Buber’s chief ally in that effort was Reform Rabbi Judah Magnes (1877-1948), who would become the first chancellor and later president of Hebrew University.

In 1925, Martin Buber began a unique project with theologian Franz Rosenzweig (1886-1929): a German translation of the Tanach (Hebrew Bible) that captured the structure, style, and syntax of the original ancient language. When Rosenzweig died four years later of ALS (Lou Gehrig’s disease), Buber was left to complete the task.

Buber and Rosenzweig had also collaborated on founding the Judische Lehrhaus, a broad-based adult Jewish educational system within Germany. Under Buber’s direction, the Lehrhaus took on extraordinary importance during the Hitler years, providing an educational, emotional, and spiritual bulwark for German Jews.

At age 60, Buber settled his family in Jerusalem, where he taught at Hebrew University. To succeed in that post, Buber, who was fluent in German, Yiddish, and Polish, successfully mastered spoken Hebrew.

Martin Buber is best remembered for his 1923 book, Ich und Du (I and Thou), a response to the viewing of fellow human beings as objects and not as holy creations of God. The “objectification” of people, he argued, has led to catastrophic results throughout history, including prejudice, wars, and mass murders.

Buber was frequently criticized for shunning formal Jewish worship, prayer, and traditional observances. In the immediate years following the Holocaust, he enraged his critics by accepting awards and lecture invitations from German institutions and for seeking to establish a post-war personal “dialogue” with Martin Heidegger, the well-known philosopher who had been a Nazi party member.

Buber’s fellow German-born Hebrew University colleague, Gershom Scholem, criticized the Buber-Rosenzweig translation of the Tanach into German, calling it “…the tombstone for a relationship that was extinguished in unspeakable horror. The Jews for whom you translated are no more… And what the Germans will do with your translation, who can venture to say?”

A personal note: I heard Martin Buber speak publicly during the late 1950s in Washington, D.C. The large audience was in awe of the famed Jewish philosopher, but due to his thick German accent, few in the crowd, including me, could understand what he was saying. All I remember is his opening sentence: “Vee liff in ein waykoom.” The translation: “We live in a vacuum.”

Happily, thanks to Mendes-Flohr’s excellent biography of Buber, we need no translator to fully appreciate the monumental teachings of this seminal modern Jewish thinker.

By
Paul Mendes-Flohr
Review by
Rabbi A. James Rudin
Image 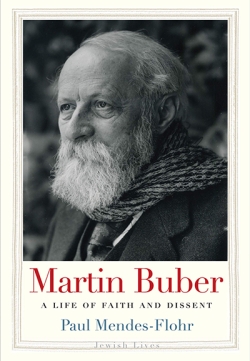