"Is Superman Circumcised? The Complete Jewish History of the World's Greatest Hero" (McFarland) is the provocative title of Roy Schwartz' detailed analysis of the most famous comic book hero in history. The book is very big, as befitting Superman: it weighs a pound and a half, contains 364 pages and measures 7x12 inches.

Israeli-born Schwartz, a director of marketing and business development for a law firm, has merged his keen knowledge of all things Jewish with his childhood love of comics. The result is a highly readable volume replete with many pages of notes, numerous illustrations, website listings, and a bibliography.

Schwartz presents a fascinating thesis: in 1934, a year after Hitler gained power in Germany, two Jewish young men from Cleveland - Joe Schuster and Jerry Siegel - created Superman. Their mythical "Man of Steel" provided their fellow Jews, and indeed the entire world, with an invincible and beloved anti-Nazi warrior who ultimately morphed over the ensuing decades into a universal fighter for Tikkun Olam, the need to repair a world filled with injustice, evil, and brokenness.

As millions of people know, Superman was born in outer space on the planet Krypton and his father had the Hebrew sounding name Jor-El. The youngster, named Kal-El, leaves Krypton in a rocket ship and is deposited in rural "Smallville, Kansas" at the home of Martha and Jonathan Kent. The couple take in the mysterious visitor and give the child from space a mundane, earthly name: Clark Kent. In time, "the mild-mannered" Clark becomes a newspaper journalist in a Manhattan look-alike city called Metropolis.

Schuster and Siegel disguised Superman by placing him in an alien environment where he fully assimilates into the existing culture, and in an effort to conceal his true identity, Clark takes on the appearance and actions of a total nebbish.

But, of course, Clark Kent is no weakling, no milquetoast. Once he throws off his conventional garb and dons a cape, a set of body-hugging tight pants and a brightly colored jersey of red, yellow, and blue featuring the letter "S," Superman is imbued with extraordinary supernatural powers including the ability "to leap buildings in a single bound." When that happens, we are off and flying with both Superman and his able biographer Roy Schwartz.

If the early story of Clark Kent/Superman sounds a tad familiar, you are correct. Schwartz makes the obvious link between Moses and the modern comic book hero. The biblical liberator of the maltreated Hebrew slaves is first deposited in a basket as a baby not in Kansas, but among the bullrushes of ancient Egypt. Moses is discovered by two Egyptian women and raised as a prince of Egypt, fully assimilated into an alien culture that conceals his true purpose on earth.

When he witnesses an Egyptian beating a Hebrew slave, a radicalized Moses kills the taskmaster and sheds his princely attire and Egyptian identity and achieves immortality as Moses, the Man of God, who frees his enslaved fellow Hebrews.

So, too, Clark Kent. Beginning with his first appearance in DC comics in June 1938 (oh, how I wish I had kept my once extensive comic book collection!) and for the following seven years until the end of World War II, Superman is a ferocious and devastating foe of Nazism and its evil doctrine of antisemitism.

Schwartz' book is filled with many illustrations of "The Man of Steel" during the past eight decades of tumultuous world history. And like Moses, Superman possesses miraculous powers that allow him to triumph over ALL forms of evil; often as a defender "of the American way."

In addition to Moses, Schwartz makes another significant link between Superman and Jewish history: the Golem, first described in Psalm 139, verse 16. In the Talmud, the Golem was "kneaded into a formless mass … and his limbs were shaped" before he was brought to life (Sanhedrin 38b: 4-5).

The most famous Golem was the one attributed to Rabbi Judah Loew of Prague in the 16th century. The intention was to defend Jews from deadly pogroms, but as Schwartz correctly notes: "hubris of its creator proves deadly when (Rabbi Loew's) creation turns on him."

In a 1998 comic book, Superman is praised by two young Jewish boys for his role in saving Jews during the Warsaw Ghetto Uprising in 1943. The boys, obvious stand ins for Schuster and Siegel, utter: "Thank you … for saving us … We're the ones who invented you."

Schwartz concludes his fascinating study with a bold assertion: "So -- is Superman Jewish? … [he] is a comic book character invented by two Jewish teens in the Depression … He was created and developed in a distinctly Jewish context and imbued with rich Jewish content, themes … borrowed from Jewish tradition [the Moses and Golem stories] that continue to manifest today … Superman is Jewish. And he will always be." 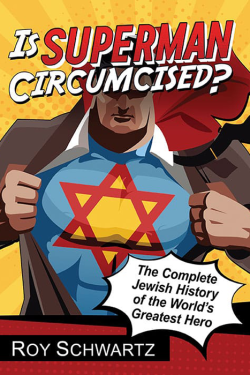