Book Review: Those Who Are Saved

Very few Jews managed to escape the Holocaust and find refuge in the United States.  In her novel Those Who Are Saved, Alexis Landau tells the story of Vera and Max, whose artistic talents and connections afforded them a new life in America without sacrificing the privileged lifestyle they enjoyed before the war.

Not that their departure wasn’t fraught with anguish.

When the war begins, Vera and Max are Russian Jewish emigres living a life of comfort in Paris. She is a prolific novelist, he a successful composer. They spend holidays at their villa in the south of France with a coterie of bourgeois friends. In denial that France will fall to the Germans, they are shocked when the Nazis occupy the country and order them to report to an internment camp. Confident that they will return in short order, Vera and Max leave their 4-year-old daughter, Lucie, in the care of her devoted governess.

Their plan does not materialize as they begin a new life behind barbed wire. Word filters back to the camps that the trainloads of prisoners leaving each day are destined for extermination centers. They avoid this fate when their friends devise a means of escape to America for Vera and Max, but there is no time to collect Lucie. Distraught by this turn of events, Vera manages to alert Agnes and tell her that they will return for their daughter as soon as possible.

After a brief stay in New York, Vera and Max land in sun-splashed Hollywood. Their friends are all ensconced in luxurious accommodations, living a blithely carefree lifestyle of lazy days, tennis games, and cocktail parties. Max’s work as a film composer gives them entrée to the good life, and he settles in. Vera is an unwilling participant, absorbed by grief and stricken with guilt about the moral disconnect between their life of entitlement and the death and devastation in Europe. Max is sympathetic to a point but doesn’t share her outrage. He suggests she see a psychiatrist.

Eventually, Agnes’ letters stop coming. As the months and then years go by, Vera clings to the hope that she and Lucie will be reunited someday:

“She was often uncertain of the time of day, as well as the season, which engendered a dreamy rootlessness as months slipped through her fingers like sand. Many of their friends had surrendered to time’s fluidity here, but she resisted it knowing that in Europe, which held Lucie in it, the war raged on.”

Vera is unaware that Agnes, fearful of the growing danger, had sent Lucie away to live in a convent.

The waiting game takes its toll on Vera. As her confidence in her future withers, so does her marriage to  Max, who is consumed with work and emotionally unavailable. They go their separate ways.

Through a chance encounter, Vera meets aspiring screenwriter Sasha Rabinowitz, an American GI home from the war who has just sold a screenplay to MGM and is on the way to a promising career. Vera finds in Sasha a kindred spirit who also is dealing with separation and loss. Raised by a single mother, an immigrant who settled on the Lower East Side, he was kept in the dark about his biological father, and he struggles to connect random childhood memories with the man who might have been that person.

As the war comes to an end, Sasha ignores an important work commitment so he can accompany Vera to France to search for Lucie. They scour the French countryside, confronting many obstacles. Along the way, secrets are revealed and threads are connected.

Alexis Landau’s attention to detail in both the European and American settings brought home the agony of separation felt by Vera, who had to wait many months for the war to end before she could begin the search for her daughter. I found the female characters more convincing than the men; Max was too thinly drawn, and the plotline with Sasha, while interesting, seemed more convenient than organic. However, the author does a fine job of exploring the themes of loss and privilege against the backdrop of history and culture, particularly of the 1940s Hollywood scene. 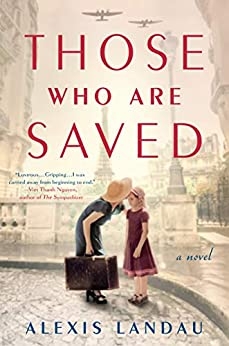