Book Review: The Weight of Ink

Helen is referring to Ester Velasquez, a Sephardic refugee in 17th-century London. She and Aaron have found evidence that points to Ester as having been the anonymous scribe of a trove of newly-discovered documents in Portuguese, Hebrew, Latin, and Castilian found hidden behind a wall of a London mansion undergoing restoration.

In The Weight of Ink (Mariner Books, Houghton Mifflin Harcourt), National Jewish Book Award winner Rachel Kadish alternates the personal narratives of Ester, Helen, and Aaron. While the premise of connecting historical figures to modern-day characters through objects or events has been overdone recently, in this remarkable novel, Kadish interweaves her themes and characters’ journeys so skillfully, one can’t help being drawn into their lives and empathizing with their personal struggles.

To escape the Inquisition, Ester Velasquez’ family fled from Portugal to Amsterdam, a thriving city tolerating Jewish refugees as long as they did not pose a threat to Christianity or attempt to convert Christians.

Rabbi Moseh HaCoen Mendes, blinded by Inquisitors in Portugal, is a frequent guest in the Velasquez home. In 1657, when 19-year-old Ester and her younger brother, Isaac, are orphaned, the rabbi takes them with him to London, where he is educating the few Jewish families who had been living as conversos (Jews forced by the Inquisition to convert and live as Catholics, many of whom remained Jews secretly) but are now, for the first time since the expulsion of Jews from England in 1290, allowed to practice Judaism openly.

When Isaac refuses to serve as the blind rabbi’s scribe, Ester agrees to pen his dictated letters, sermons, and notes, tasks she conceals from the world because doing so was contrary to the social norm for Jewish women at the time. The physical act of placing quill to parchment, as well as the substance of the rabbi’s writings and teachings, awaken in Ester a desire for knowledge.

The writing table seemed abruptly to be a vast expanse – a plateau where some small remaining freedom might be possible. A tidy stack of paper, a wide glass jar of quills, a pen knife…the smooth grain of the tabletop. She felt her body rush with quick heat, as though every bit of her, every plain and hidden part, were waking.

In time, Ester conducts her own correspondence, signing her letters with either the rabbi’s name or other male names. She argues difficult philosophical and theological questions with prominent European philosophers, including the excommunicated Benedict Spinoza, daring to express forbidden atheistic ideas and questioning God’s omnipotence.

Forced to choose between a conventional seventeenth-century Jewish woman’s life and intellectual pursuits, after a long personal struggle, Ester chooses freedom of the mind.

Helen Watt, age 64 and a suffering from rapidly advancing Parkinson’s Disease, is due to retire soon from her university post. Faced with impending death and driven by passion for what she knows will be her last research project, Helen is inspired by Ester’s bravery and comes to terms with her decision many years earlier not to marry her Israeli lover and instead dedicate herself to the life of “the lonely mind.”

Aaron Levy, who is in London struggling to finish his Ph.D. dissertation on the relationship between Shakespeare and Sephardic Jewish refugees, welcomes the chance to work with Helen, though they are often at odds with one another. His academic and personal life are stalled. But the important historical discoveries he and Helen have made together reinvigorate his commitment to the scholarly life and stir his hopes of reuniting with the woman he loves.

Kadish’s adept writing gives us a vivid picture of life in London at a time when the population faced the dual disasters of the bubonic plague of 1665-66 and the Great Fire of London. Life was even more tenuous for the city’s Jews, who lived in constant fear of anti-Semitic outbursts and the long arm of the Inquisition.

She masterfully interweaves the complex twists and turns of the book, building to the climax of the three stories so skillfully that one is left breathless at its close.

The “weight of ink” in the title refers to the special ink used in the 17th century that was so heavy it created holes in the parchment. The title also connotes the transformative power of the written word. What a joy to experience the “weight” of Rachel Kadish’s astonishing storytelling. 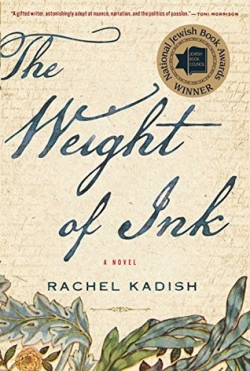