Spending the High Holidays in Bali 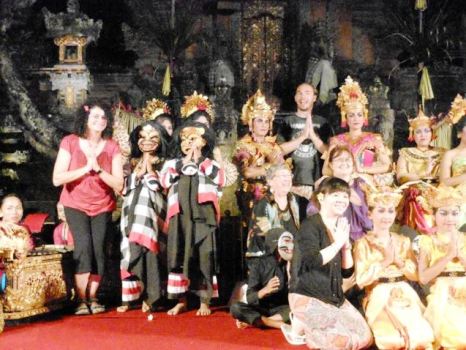 Rosh HaShanah in Bali, and I was sitting in the rain watching the Ramayana, a traditional dance, after a dinner of lamb kabobs. Could this be kosher?

Ever since I signed up for a group trip to Bali, I wondered how I'd handle the High Holidays. Friends back home were using my coveted synagogue tickets and I was literally a wandering Jew - rain-soaked in an open-air theater surrounded by lotus-filled ponds, unholy thoughts creeping in. I'm not sure it was an auspicious start to the new year.

It wasn't as if I hadn't tried to find a more traditional venue to spend the holy day. Before departing, I used social networking to reach out, asking my 166 Facebook "friends" if they knew any Jews in Bali. I got some cooperation, some envy, and this crack from Holly, a junior high friend: "If you have an extra airline ticket and room in your hotel, I'll join you and you'll have someone else Jewish there for sure!"

Being a traditional kind of girl, I needed a place to be with my "People" to celebrate the New Year. I Googled "Jews in Bali" and discovered Roving Rabbis and Chabad, which seemed to be everywhere, from Tunisia to Topeka. The Roving Rabbis never responded, but the Orthodox Chabadniks gave me a contact. I waited.

I felt some urgency. While applying for my visa, I noticed that Israeli passport holders were not allowed to enter Indonesia, a predominantly Moslem country. Bali is a Hindu holdout in Indonesia, but was anti-Semitism lurking? In 2002, Islamic jihad suicide bombings killed 202 Westerners and Balinese workers at a Bali beach resort. Probably not surprising, therefore, that a guard passed a mirror under our taxi as we drove up to our lodging on our first night in town.

Seeing swastikas didn't help matters either. The symbol was everywhere, including inside our taxi the next day. I broke out in a sweat. Well, maybe it was the humidity, too.

Some fellow travelers, seemingly in the know, tried to reassure me.

"Actually the swastika is an ancient Turkish symbol," declared Anne, who's been around the block and around the world on countless occasions.

"And the American Indians used it as well," added photographer Jim.

Interesting, but the swastikas still creeped me out - and certainly didn't enhance my new year's spirit!

On Rosh HaShanah Eve day (like Christmas Eve, only for Jews) the group decided to visit a mask-maker. I was excited to discover how an actual Balinese person felt about Jews.

"Are there Jews in Bali?" I asked the mask man. "Are there any problems?"

"We do not look at brown or black," he told me. "In our ceremonies we use all the colors. We are all human."

It sounded good to me. I relaxed a bit.

So that night, 1 Tishrei 5772, sitting in the drizzle among the flower-filled ponds in front of an ancient stone temple, I watched the colorful Ramayana dance depicted by actors wearing centuries old masks and costumes. Twenty-five women on each side formed a gamelon orchestra, clanging a musical background to the guttural yips and unintelligible phrases of the melodramatic narrator. I tried to enter a spiritual space, but it was pointless. Wholly unholy thoughts streamed my consciousness.

What the hell is going on? I asked myself. How would we know if someone hit a wrong note, when it's so discordant? Will the dancers' painful-looking wrist movements prevent arthritis in old age or promote it? When will this be over?

When it was finally over, my fellow travelers gushed about the performance. I stayed silent. No need to broadcast my spiritual shortcomings.

I awoke on Rosh HaShanah to the sound of roosters and pretended it was the sound of the shofar, the ceremonial ram's horn meant to awaken Jews to self-reflect. A line from a Rumi poem ran through my mind: "There are many ways to bless the ground." I began to search for signs and found some. I met a snake with the biblical name Esther outside the Goa Gajah, or Elephant Cave. I bought a coconut with a carving of Ganesha. Didn't he have his head cut off? "Rosh" means head in Hebrew. Hmmm.

The flat rice treat I'd bought to substitute for the round challah bread symbolizing new year's cycle was completely inedible. I hypothesized it'd been shelf-bound for all 5772 years of Jewish history. An ungenerous thought, I felt immediately contrite.

My Rosh HaShanah, it seemed, had been a bust in Bali. I probably should have stayed home if I really needed familiar rituals to feel complete.

That night, I decided to take a swim in the little pool outside my room. No one was in sight, so I tossed discretion aside and went skinny-dipping. The moonless night, the silhouetted palms, and the clouds crossing over the stars created a magical backdrop. I did a water dance with two twirling yellow frangipani flowers and listened as frogs and birds serenaded. As I floated, I finally let go of my fears and expectations. In Jewish tradition, a mikveh, or ritual bath, is taken before a wedding, at conversion, and to herald that time in a woman's cycle when she is ready to "be fruitful and multiply."

As it turns out, my mikveh in Bali was a perfect way to start the new year.

Nancy Alpert is a writer who lives in San Francisco with her daughter. She grew up in Long Beach, CA, as a member of Temple Israel, and is currently a member of Congregation Emanu-El. She can be reached by email.