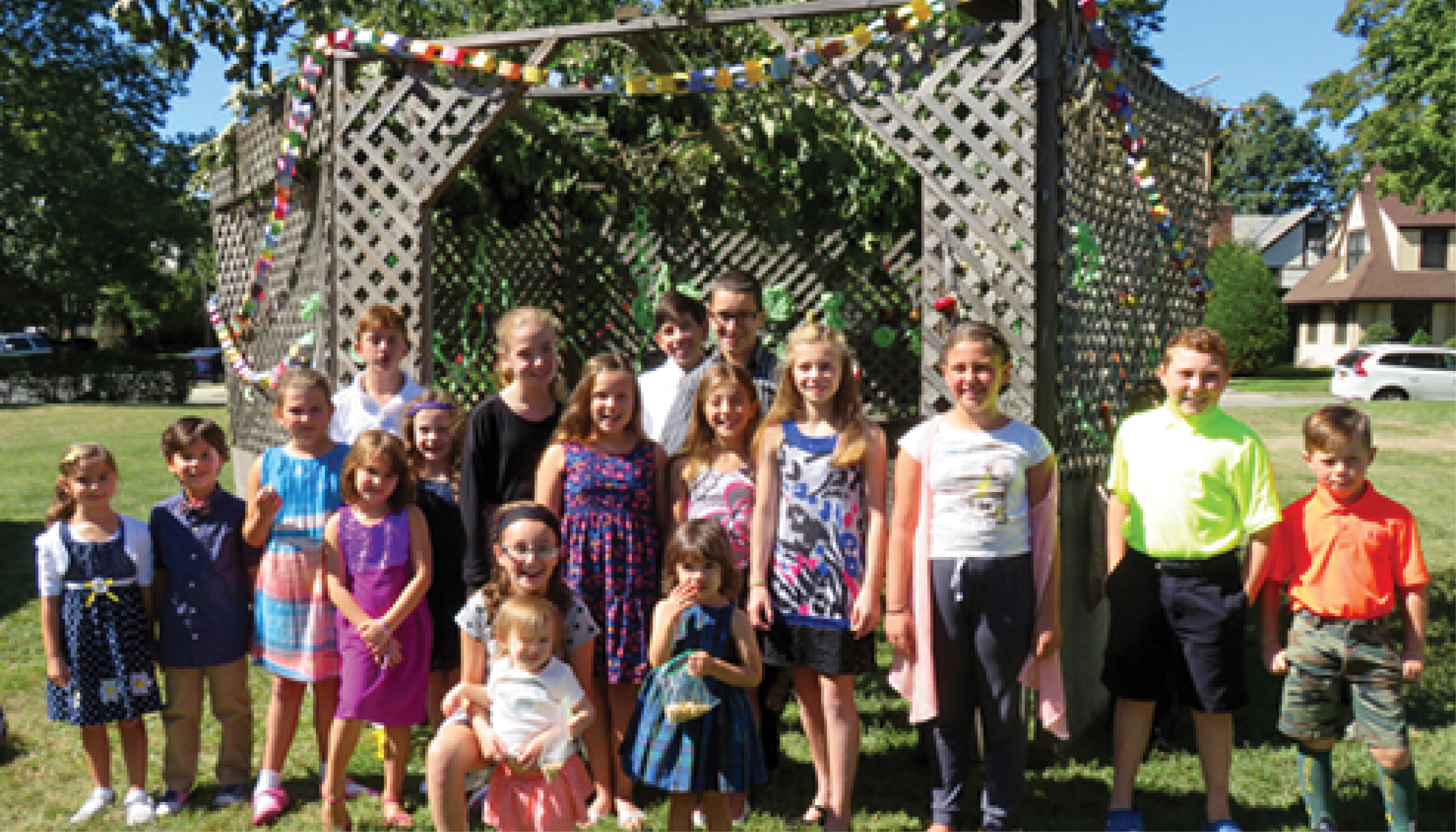 Sukkot, a Hebrew word meaning “booths” or “huts,” refers to the annual Jewish festival of giving thanks for a bountiful fall harvest and commemorates the 40 years of Jewish wandering in the desert after the giving of the Torah TorahתּוֹרָהLiterally “instruction” or “teaching.” The first five books of the Hebrew Bible (Genesis, Exodus, Leviticus, Numbers, and Deuteronomy); the handwritten scroll that contains the first five books of the Hebrew Bible. Also called the Pentateuch and The Five Books of Moses. “Torah” is also used to refer to the entire body of Jewish religious teachings and insight.  atop Mt. Sinai.

Sukkot begins five days after Yom Kippur. It is observed for seven days by Israelis and many Reform Jews, and for eight days by other Jews living outside Israel. The eighth day of Sukkot, Sh’mini Atzeret, is traditionally a separate festival in its own right. In Reform congregations, which generally observe one day of holidays rather than two, Sh’mini Atzeret is observed concurrently with Simchat Torah, the festival of “rejoicing in the Torah.”

Like many societies, the ancient Hebrews had a variety of agricultural festivals. Sukkot likely has its roots in one of these ceremonial expressions of thanks to God for a good crop. By biblical times, Sukkot had evolved into a celebration of the summer fruit harvest: “At the end of the year, when you gather in your produce from the fields” (Exodus 23:16).

Initially, the holiday that became Sukkot had no fixed date and was observed whenever the harvest had been completed, depending on climatic conditions. By Torah times, however, the Book of Leviticus (23:33) declared: “On the fifteen day of the seventh month, there shall be a Feast of Tabernacles to God for seven days.” The date, then, was standardized.

Sukkot later became one of the three Jewish pilgrimage festivals (Shalosh R’galim). As on Passover and Shavuot, the people would bring a portion of their harvest’s first fruits to the Temple in Jerusalem. There, it would be offered as a sacrifice to God by the High Priest. After the destruction of the Temple in 70 C.E., Sukkot became a synagogue and home celebration, marked by unique rituals and symbols.

As was the case with other agricultural celebrations, the holiday also is invested with strong historical significance. Just as Passover is tied to the Exodus from Egypt and Shavuot is associated with the giving of the Torah, Sukkot has come to reflect the experience of the Israelites wandering in the wilderness. The 40 years of wandering in the desert prior to entering the Land of Israel is captured, symbolically, in the frail sukkah.

The Book of Leviticus (23:42-43) portrays God as commanding: “You shall dwell in booths for seven days…that your generations may know that I made the Children of Israel to dwell in booths, when I brought them out of the land of Egypt.” This passage is the biblical basis for building a sukkah.

There are two additional symbols associated with Sukkot that are historically based – the lulav lulavלוּלָבA date palm frond with myrtle and willow sprigs attached; used in Sukkot rituals. and the etrogetrogאֶתְרוֹג"Citron." Lemon-like fruit used in Sukkot rituals. . Lulav is a Hebrew word meaning “palm branch” and refers to a unique ceremonial object associated with Sukkot. Lulav also is a generic term that describes a three-sectioned holder with a single palm branch in the center, two willow branches on the left, and three myrtle branches on the right. Etrog is a Hebrew word meaning “citron,” and refers to the special lemon-like fruit used together with the lulav in the Sukkot ritual.

As part of the biblical celebration of Sukkot, Leviticus 23:40 commands: “On the first day, you shall take the fruit of a goodly tree [literally, “etrog”], palm branches, myrtle boughs, and willows, and rejoice before Adonai.” With this passage, we know that the use of the lulav and etrog originated in biblical times. Over time, the combination of citron, palm, myrtle, and willow also became known as the arbaah minimArbaah minimאַרְבַּעַת הַמִּינִיםLiterally, “four species.” The Torah specifies four species to bring together on Sukkot. The four species are: lulav (branches of palm trees), etrog (citron), hadasim (myrtle branches), and aravot (willows) (Leviticus 23:40). (“four species”).

In Israel, Sukkot marks the beginning of the rainy season, which lasts until Passover. In Israel and among Jews in the Reform Movement, Simchat Torah is celebrated on the eighth day after Sukkot begins and serves as a post-biblical festival created to honor the Torah.