An interview with Rabbi Lawrence A. Hoffman 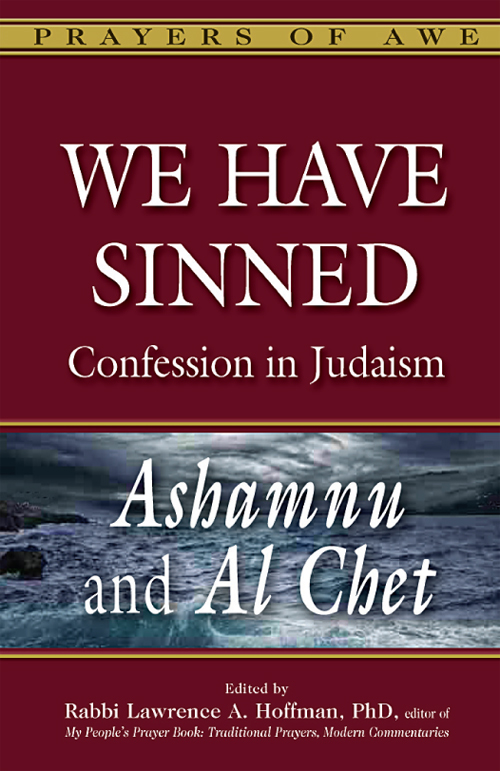 Rabbi Lawrence A. Hoffman, Barbara and Stephen Friedman Professor of Liturgy, Worship, and Ritual at HUC-JIR, edited We Have Sinned: Sin and Confession in Judaism-Ashamnu and Al Chet (Jewish Lights), which examines the history of confession and its evolution in rabbinic and modern thought.

What prompted you to edit a book about sin and confession in Judaism?

The High Holy Days are supposed to present us with the most profound experience of being human and searching for the Divine. But the service is long, the prayers go back centuries, and their language is hard to negotiate. I hope that through reading this book, the fourth in the Prayers of Awe series, people will gain a deeper understanding of our liturgy, so that when they leave the synagogue after the final shofar blast of Yom Kippur, they will feel that they can, with proper repentance and resolve, move on to life renewed.

The word "sin" sounds harsh. Are we expected to believe that our misdeeds rise to the level of sins?

True, in our day we hesitate to label our actions as "sins." We prefer the language of making mistakes, falling short, or missing the mark, as if life is target practice and sin is just an arrow gone astray. But some errors are morally repugnant. When harm is unleashed at a magnitude that exceeds a mere mistake, we need a word like "sin" to do justice to the immoral act.

How did our ancestors understand sin?

Let me explain metaphorically, as theological terms sometimes require metaphors to be understood. The Bible likens sin to a burden that weighs us down. For example, the biblical attribute of Divine pardon was nosei avon (Exodus 34), meaning, literally, "lifting the sin" from off of us. Sin was also perceived as a stain that must be wiped clean. "Be your sins like crimson," the prophet Isaiah says, "they can turn snow-white" (1:18).

The metaphor of sin as burden rings true today. We all know what it's like to be weighed down by work or responsibility. We can also be weighed down by the guilt that accompanies knowing we have done something terrible—or realizing that we regularly do things wrong but cannot manage to change course. That is the very essence of addiction, after all; many of us are dependent on alcohol or drugs, unhealthy foods, overwork, gambling, or any number of bad habits that may lead to outright sins. Sometimes we just cannot get out from under by ourselves; we need Divine help. Rosh Hashanah and Yom Kippur are times to say, "With God's help, I will change course. I need not be weighed down any more." And, hopefully, by the close of the High Holy Days, we will feel relieved of the burdens we have carried for an entire year.

The rabbis who canonized the Bible in the first two centuries C.E. preferred another metaphor: sin as debt. The rabbinic term for "punishment" is puranut, from the root para, meaning "to pay off or collect a debt." They pictured us as building up a bank account of good deeds through "acts of loving kindness" (gemilut chasadim), which were then set upon a heavenly balancing scale to see if our good deeds outweighed our sins. Christianity, which arose at that time, employed this same image of "sin as debt" in the "Lord's Prayer": "Give us this day our daily bread. And forgive us our debts, as we forgive our debtors."

The metaphor of sin as debt is also apt for our time. Many of us know the fear of going so deeply into debt we may never be able to crawl out. We can think of the Day of Atonement, then, as the opportunity to say, "I have committed many sins—fallen deeply in debt—but can now start again with a clean balance sheet."

How does the Jewish view of sin differ from the Christian notion?

Classical Christianity saw sinfulness as essential to human nature: an original blemish inherited from the biblical Adam as part of our DNA, so to speak. Classical rabbinic thought viewed sin as primal, in the sense that all of us partake in it, but not as the essence of who we are. Here we should distinguish between the act of "having sinned" and the condition of "being a sinner." There was a time when hospital Oncology departments posted signs saying, "Cancer is something I have, not something I am." Similarly, in the Jewish view, sin is something we do, not something we are. Even though the best of us do sin, we are not total sinners.

Moreover, as elemental as sinfulness is, the human default position, according to Judaism—the one for which we were created—is to stand alongside God in goodness. The High Holy Days prescribe teshuvah (return) as the starting point in a journey back to that default position: standing alongside God as human beings formed in God's own likeness.

Classical Christianity, by contrast, denies the human ability to return on our own. Christians need two revelations, two covenants (or "testaments," as they are known): the first (Torah), to lay down the laws by which we shall live; and the second (Jesus), to relieve us of our sins when we inevitably go astray. Jews suffice with a single revelation which is both challenge and solution: a challenge because keeping the Torah laws without some degree of failure is near impossible, and a solution because the same Torah provides a means by which to return to God, who waits patiently for us, wanting only our return.

If confessing our sins is so important, why don't Jews undertake the practice more frequently?

Actually, the rabbinic ideal was to confess our sins every single day. The Talmud contains several examples of daily confession, including one by the fourth-century Babylonian sage Rava: "My God, before I was created I was worth nothing, and now that I am created I am as if not created. While alive, I am dust—all the more so when I die. I stand before you like a vessel filled with shame and contempt." The traditional prayer book Seder Rav Amram (named for its author, who lived in Baghdad in the ninth century) still prescribes the Ashamnu (the short confession, "We have incurred guilt") every Monday and Thursday; and even today most Sephardi prayer books also include it for services on those same days (when the services are longer). The preferred practice in Ashkenazi communities was to limit Ashamnu to Yom Kippur.

Jews are also supposed to confess on their deathbed (or whenever they might be sick enough to fear they are about to die) and, traditionally, bridegrooms say a personal, private confession under the chuppah before the wedding ceremony begins, as if to wipe the slate clean before they marry.

Why does the Yom Kippur liturgy include two standard public confessions—Ashamnu and Al Chet?

All of our prayers originated in an era before widespread literacy—let alone printing—when it was impossible to have any standardized texts. People improvised prayers on the theme of the moment, stringing together biblical phrases with wording composed on the spot. Over the course of time, some of the versions disappeared while others crystallized into formulas that were repeated and endured. Our two confessions were the ones that somehow managed to survive and then become embedded in the written liturgy that Rav Amram compiled in his prayer book. Other confessions also continued to exist, such as the short talmudic confession attributed to Mar Zutra (Yoma 87b), which includes the words, "We have surely sinned!" (Aval anachnu chatanu) and now serves as an introductory paragraph to Ashamnu.

Today, both Ashamnu and Al Chet are recited in every High Holy Day service except the concluding one, N'ilah, when only Ashamnu is said. There, Al Chet is replaced by Atah noten yad ("You extend a hand…"), an affirmation that God reaches out to draw us toward the state of renewal for which we have been praying. So, just when we're ready to confess one final time—our last chance, as it were, before nightfall—it is as if God says, "You've confessed enough today; the short confession alone will do."

Why do we confess as a community to a manufactured list of misdeeds most of us have never committed?

These public confessions reflect the issue of sin as it impacts the body politic, the community, rather than just the individual. While we are expected to make our private confessions, coming to terms with God for our own sins, Judaism is not just for individuals as sole isolates, but for individuals as members of communities; it worries about the nature of the community in which we take our stand and which helps form us. It teaches that to assure a just society, all of us must be held at least partially accountable for one another—even if we did not personally commit a particular sin, we likely stood idly by when others committed it.

Then, too, the two confessions remind us that we may be metaphorically guilty of larger transgressions than we realize. We may never have committed murder, but we may have belittled another person to the point where he/she felt like dying.

Do you have any other suggestions for us as we approach the High Holy Days?

Attending synagogue on the High Holy Days is like visiting a strange but magnificent city filled with historical monuments to the past and overlaid with echoes of the present. It's best to think of the liturgy as art, not science. It reaches us through music and the drama we call worship.

And try to transcend the literal meaning of the prayers. Treat them as poetry and study their historical context, as they are best approached with some understanding of the conditions that inspired them. Then we can truly appreciate their metaphoric assurances of our human purpose.