Why Apples and Honey? 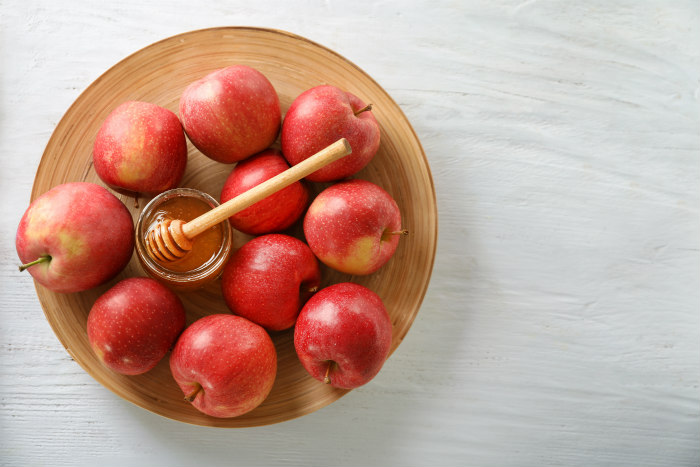 Apples and honey: For Ash­kenazi Jews, these words are an inseparable pairing. We dip a slice of apple in honey to express our hopes for a sweet and fruitful year.

Why were apples and honey chosen for this custom?

It’s not because of what Adam and Eve did in eating from the Tree of Knowledge in the Garden of Eden; the Bible never identifies the forbidden fruit. More likely, apples were selected because in ancient times they became a symbol of the Jewish people in relationship to God.

In Song of Songs, we read,

“As the apple is rare and unique among the trees of the forest, so is my beloved [Israel] amongst the maidens [nations] of the world.”

In medieval times, writes Patti Shosteck in A Lexicon of Jewish Cooking, apples were considered so special that individuals would use a sharp utensil or their nails to hand-carve their personal hopes and prayers into the apple skins before they were eaten. And the Zohar, a 13th-century Jewish mystical text, states that beauty, represented by God, "diffuses itself in the world as an apple.”

Neither the Bible nor the Talmud dictates the minhagminhagמִנְהָגCustom, which may carry the weight of halachah (law).    of dipping apples in honey. Traditionally, as early as the 7th century, it was customary to wish someone, “Shanah tovah umetukah” (a good and sweet year), and honey, whether from dates, figs, or apiary, was the most prevalent sweetener in the Jewish world and was thus the most available “sweet” for dipping purposes.

And as for the biblical description of Israel as a land flowing with “milk and honey,” the Torah is alluding to a paste made from overripe dates, not honey from beehives. Still, enjoying honey at Rosh HaShanah reminds us of our historic connection with the Holy Land.

May your year be sweet, fruitful, and filled with contentment and promise.