How To Find the Right Mohel For You 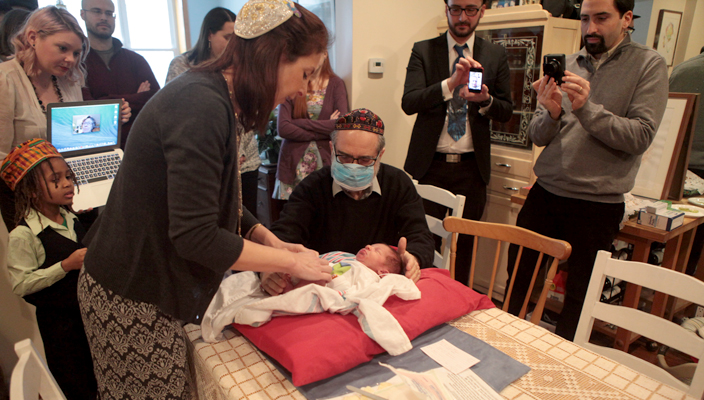 I don’t know how we found the mohel (ritual circumciser) who circumcised our oldest son 38 years ago, but the most memorable thing about him was his trembling hand. As he lowered his knife, I thought my physician father-in-law would faint. Suddenly, the mohel’s hand became sure and steady, my father-in-law looked with a smile, and everyone exhaled.

My wife met the mohel who performed the b’rit milah (the covenant of circumcision, sometimes called a bris) on our second son when he presented her with his card in the maternity ward of the hospital. He turned out to be the stand-up-comic kind of mohel. His Catskill humor shtick managed to reduce the anxiety level in the room but made a sideshow of the main event.

In those days, we didn’t inquire in advance about the religious beliefs, surgical methods, or even the fees of these mohalim; nor did we inform them about our own predilections. Most of the practitioners in our neighborhood were Orthodox men with Yiddish accents, and we didn't think we had much of a say.

Flash forward to the start of 2015, when my daughter Mimi and her husband Wes were expecting their first child, a son. Their first thought was to have the bris in a hospital or doctor's office on the eighth day, and they invited me to recite the appropriate blessings for a kosher b’rit milah.

I consulted Rabbi Julie Pelc Adler, director of the Berit Mila Board of Reform Judaism, which since 1984 has trained and certified more than 300 licensed physicians and nurse midwives as officiants of this ancient Jewish rite.

Rabbi Adler advised against the hospital or doctor’s office option. "Hospitals,” she said, “are designed to be antiseptic, an atmosphere that diminishes the warmth and specialness that mohalim bring to this communal rite.”

“And today,” she pointed out, “it is easier than ever before to find a mohel or mohelet (female mohel) whose values and philosophy reflect those of the couple both ritually and medically."

The first step, she told us, is to check out this "Find a Mohel/et" directory of Reform mohalim in your area. Next, look at their online information and call with any questions or concerns you might have, such as:

A month before her due date, Mimi contacted several mohalim on beritmila.org and felt an immediate affinity for Lucy Eisenstein Waldman, a mohelet and mother of four sons, who explained what would happen during the process both spiritually and medically. And, coincidentally, Lucy had received her midwife training with the practice that would be delivering Mimi’s child.

On the day of my grandson Edwin’s birth, my son-in-law phoned Lucy to set the time of the ceremony, which was to be held in the family’s Brooklyn apartment.

“Eight days later,” Wes said, “Lucy did an admirable job of seamlessly juggling the spiritual and medical elements of the b'rit milah — and doing it all while keeping the baby calm. She also made the ceremony understandable to our non-Jewish friends in the room and included our long-distance family watching via FaceTime. Most significantly, the ceremony affirmed our son’s identify as a Jew and his commitment to Judaism in the presence of his community, even though he doesn’t know it yet.”

Finding the right mohel is a lot easier today than it was in my generation.

Aron Hirt-Manheimer is the Union for Reform Judaism's Editor-at-Large.