A Brief History of Hanukkah 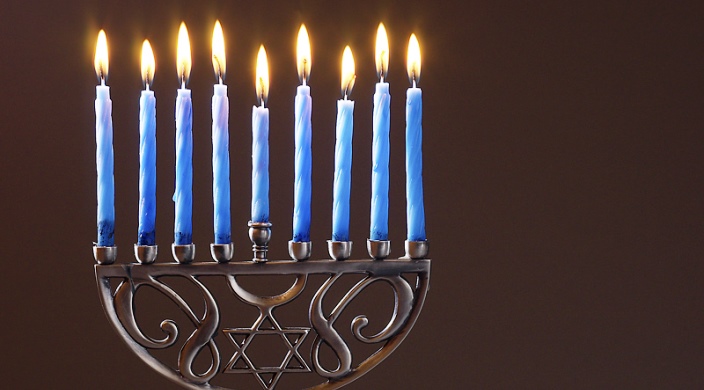 The Hebrew word hanukkah means "dedication," and refers to the rededication of the second temple to the service of God during the successful revolt of the Maccabees against the Seleucid rulers of Syria in the second century BCE. Here is a brief history of the events that led to the rededication (Hebrew Hanukkah) of the temple.

After the death of Alexander the Great, in 323 BCE, his generals divided his huge Greek Empire into various parts: Ptolemy I Soter took Egypt and Seleucus I Nicanor obtained Syria and the eastern provinces. In 301 BCE, Judea and Phoenicia were finally transferred to Seleucus. In those days, Jews were ruled internally by the High Priest who often depended on the Greek rulers for their authority.

In 175 BCE, when Antiochus Epiphanes IV became king in Damascus, the capital of Greek-Syrians, he displayed great ambitions for his empire by attempting to conquer Egypt and other surrounding countries. He even gave himself the surname "Epiphanes" (meaning "the visible god") and started to interfere in the politics of Judah. This did not sit well with many Jewish leaders, many of whom facetiously called the king "Epimanes" (meaning "the madman"). The king appointed Jason (for Joshua) (175-171 BCE) as High Priest instead of his brother Onias III. However, under the influence of the Tobias family, Antiochus replaced Jason with Menelaus (for Onias) (171-167 BCE), in exchange for a large sum of money (II Mac. 4:24), even though Menelaus was not a member of the High Priestly family.

In 169-168 BCE, Antiochus IV set out to conquer Egypt. While he was fighting there, Jason, the deposed High Priest, left the Ammonites with whom he had taken refuge, and attacked Menelaus in order to regain the High Priesthood. A civil war broke out between Jason and Menelaus, and Jason successfully entered the city of Jerusalem. King Antiochus was furious. On his way back from Egypt, Antiochus attacked Jerusalem, imposed restrictions on Judea, and eventually desecrated the Temple.

On the fifteenth day of the month of Kislev, in 167 BCE, the Syrian-Greeks erected "a desolating sacrilege upon the altar of burnt offering" (I Mac. 1:54). Though the meaning of this expression is not altogether clear, it probably meant a pagan altar or statue. That was too much for many pious Jews. A priest by the name of Mattathias of the Hasmonean family from the town of Modein, not far from Jerusalem, along with his five sons, decided to rebel. Some of their followers refused to fight on the Sabbath, and as a result, many were massacred on this holy day. Mattathias and his sons believed otherwise. They said that the Sabbath was given to Israel to live and not die. So, they urged their compatriots to carry weapons even on the Sabbath. Eventually, many of the Jews joined the Hasmoneans in their fight for freedom.

The Hasmonean revolt continued after the death of Mattathias, with considerable success. Under the leadership of Mattathias's son Judah (called the Maccabee), Jewish armies defeated the Syrians in 166 BCE. As a result of these military victories, parts of Judea were liberated. After two years of defilement, the Temple was also purified and rededicated to the worship of the one invisible God. This dedication took place on the twenty-fifth day of Kislev, 165 BCE, and was celebrated for eight days.

Yet, it is not clear why the festival lasted that long. According to a Talmudic legend, when the Maccabees purified the temple, they found a small flask of oil bearing the seal of the high priest. The flask contained enough oil to light the sacred candelabrum for one night only, but, as the text adds, this oil miraculously lasted eight days (BT Shab. 21b). This is probably the most widespread explanation, but it is not the only one nor the best one. Another rabbinic source has it that when the Maccabees entered the Temple they found eight iron spears. They stuck candles on them and kindled them, thus poetically turning each spear into a lamp (P'sikta Rabbati 2:1). A symbol of warfare thereby became a symbol of hope. The most reasonable explanation is found in a post-biblical text, where Hanukkah appears as a delayed Sukkot because of the profanation of the Jerusalem temple by the Greeks. Once the temple was rededicated, the people could now celebrate Sukkot freely. Thus, according to the Book of Maccabees, Judah Maccabeus proclaimed that the festival should last eight days, "with rejoicing, in the manner of the feast of Sukkot" (II Mac 10:6).

Rabbi Rifat Sonsino, PhD is Rabbi Emeritus of Temple Beth Shalom in Needham, MA, and is presently a member of the faculty in the Theology Department of Boston College.