"Life Is in the Transitions": Wisdom from a Bestselling Author 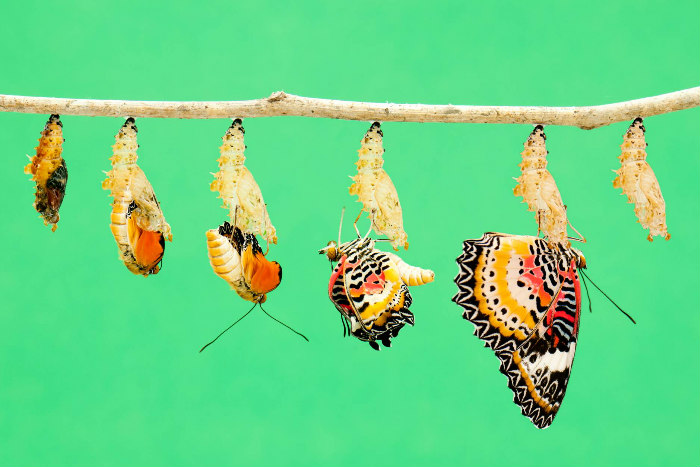 What can we learn from transitional periods of our lives? What is a "lifequake," and what can they teach us about ourselves?

Bruce Feiler is the author of six consecutive New York Times best-sellers, including the Walking the Bible, The Secrets of Happy Families, and Council of Dads. He has hosted two prime-time series on PBS, and his two TED Talks have been viewed more than two million times.

A native of Savannah, GA, Feiler now lives in Brooklyn with his wife, Linda Rottenberg, and their twin daughters. I caught up with Feiler to discuss his latest book, Life Is in the Transitions: Mastering Change at Any Age.

ReformJudaism.org: You say the idea that our lives follow a linear sequence of stages or phases is an illusion. Why do so many of us think that way? How did the idea of linearity come about, and what’s the harm in it?

Bruce Feiler: We have always known that the human experience is nonlinear. Just look at our biblical ancestors – Adam and Eve expelled from the Garden of Eden, Abraham leaving the land of his father, Sarah giving birth in her old age, Abraham almost sacrificing his son – the story that we read every year on Rosh HaShanah.

But a powerful aberration took root in the 20th century. Living in an industrial age, we were raised to expect that life would follow a linear arrow of progress and we would grow up to have one job, one spouse, one home, one spiritual path, one sexuality, one source of happiness. This false expectation has caused many of us to feel anxiety and dissatisfaction with our lives.

Generation X understands this even more intuitively than boomers and millennials. They know they will experience more job changes, more moves, more disruptions, and more transitions than their parents did.

You experienced a series of disrupters in your own life a few years back when you were hit by a set of experiences that shattered your illusion of linearity or that you could control the narrative of your life. What happened?

My life had been largely linear, but in my 40s, I was diagnosed with a rare, aggressive bone cancer in my left leg, nearly went bankrupt, and had to wrestle with my father’s spree of suicide attempts.

You refer to this pile-up of disrupters as “lifequakes.” How widespread is this phenomenon?

Most of us manage to get through our disrupters with only minor upset to our lives, but one in ten rises to the level of destabilizing us. I call these “lifequakes,” because their aftershocks can last for years.

My research shows we go through three to five lifequakes in our lives, and they last an average of five years. That means nearly half of our adult lives is spent in a state of transition. You or someone you know is going through one now.

What did you learn about the power of storytelling in navigating your own lifequake?

I learned the healing power of rewriting the narrative of our lives. Whether you’re facing an illness, a job loss, a move, or some other life transition, the best way to find meaning is to add a new chapter to your life story that tells how you got through a massive life interruption and successfully transitioned to a new beginning.

You managed to help your father find new meaning in his life. How did you achieve that?

My dad has Parkinson's, the same disease that led his father to take his own life. My dad, who was never depressed a minute in his life, got to a similar point.

We struggled with how to respond, but I’m story guy, so one Monday morning I sent him a question: “What toys did you play with as a child?” My dad, who couldn't even move his fingers at that point, dictated his answer into a recording device. The following week, I asked him about the house he grew up in. This went on every Monday morning for the next five years until my dad, who had never written anything longer than a memo, backed into writing a 52,000-word autobiography.

When you re-image and reconstruct your own life in this way, you find meaning even in situations that might seem hopeless. I have started a service that sends people a question every week to pass along to a loved one who might benefit as my dad did.

Why do you think so many people use rituals to help them navigate transitions?

Nearly 80 people of the 225 people I interviewed for this book (in all 50 states) used rituals in some way, like getting a tattoo, holding a memorial service, playing a certain piece of music, going to a sweat lodge, or jumping out of an airplane. Many people think they are inventing their own rituals, but actually they are echoing something we have long seen in the Jewish historical experience: the reinvention of traditions in periods of disruption and displacement.

Judaism has survived because succeeding generations have infused our storytelling tradition with new rituals, and the same applies to individuals.

How can we apply these insights to our response to the pandemic?

While the pandemic is involuntary, individual life transitions need to be voluntary. So focus on one aspect of your life that you want to improve and go through the process outlined in the book to get you there. For some people, it may mean focusing more on their family; others may want to change their job or deepen their religious practice.

If I were to sum up what I learned after five years of working on this book, it is this: Transitions work. When life gets us stuck, a life transition is the means of getting unstuck.

END_OF_DOCUMENT_TOKEN_TO_BE_REPLACED

Judaism encourages us to awaken each day with thoughts of gratitude. I recite the Modeh Ani each day to thank the Divine for returning my soul. I was recently asked where our soul goes while we sleep. This poem is my response.
Jewish Learning
Image