Monkeys, Lizards, and an Unexpected Lesson in Jewish Values 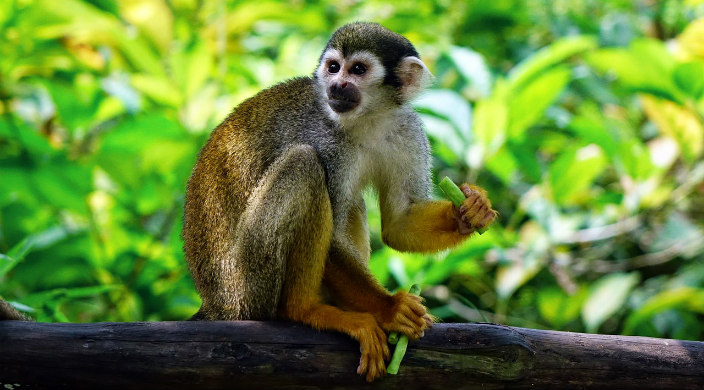 My son spent his college summers working in an orphanage in Costa Rica. One year I traveled down there to meet him on his break. He and some friends and I went to Manuel Antonio National Park to hike and see the wildlife.

Monkeys chattered in the trees above us. They were fuzzy and cute and definitely crowd-pleasers. We tourists kept taking their pictures and they ate it up. We saw wonders everywhere: sloths, lizards, insects, all kinds of creatures I had never seen before. The greenery was filled with beautiful animals. We stopped for a bit and a guide showed us a sloth up close through his telescope. I saw the soft fur, the long claws, and its soft snoring.

WHAP! Something landed hard on my head, jamming my sun hat down over my eyes. I felt dazed. The guide grabbed my arm, and my son hollered, “Mom!” The green world circled around me; I focused on my feet.

There at my feet lay an equally dazed garrobo, the local name for a black spiny-tailed iguana or Ctenosaura similis. She was big, almost two feet long. I couldn’t figure out what she was doing there, or why my head hurt so much. She was ugly and beat-up looking. She had lost part of her tail.

It turned out that one way the monkeys, or monos, amuse themselves is by catching the garrobos by the tail and hurling them. They think this is hysterically funny. Some mono had outdone himself with a Daily Double: he smacked the gringa (white lady) in the pink sun hat with the lizard.  The monos celebrated in the tree tops above us, giving the monkey equivalent of high-fives.

The guide and my son wouldn’t let me touch the garrobo, toward whom I felt a great kinship. They were worried that it might bite me, in its confused state, and apparently garrobo bites are serious business. They scavenge for trash, so their mouths are dirty.

I gathered very quickly that no one likes garrobos. Garrobos are not cute. They have no soft fur. They are known to bite children and unwary fools visiting from California. The wild ones are not pretty like the iguanas some people keep for pets. They are grey and black and battered-looking.

We walked up the trail, leaving both the monkeys and the garrobo behind. It bothered me.

Later, I realized what bugged me so much. The monkeys are cute and furry. The locals know they are not nice creatures, but they entertain tourists who bring money to town. Tourists think they are adorable: They have faces almost like human faces, and they hang from tails and long toes in trees, tiny acrobats. As the guide said to me, “Everyone likes the monos.”

How often in this world do we decide who is “good” and who is “bad” by how people look? How often do we attack someone we don’t like by making fun of their appearance? What happens to the ugly, well-qualified woman who applies for a job? What about the ugly or awkward man – how often do we assume that he is also dangerous?

And what about the handsome people who behave badly – are we not inclined to give them a few more chances? The movie star accused of domestic violence? The good looking young athlete who “doesn’t need to rape anyone” so he couldn’t possibly have done it?

We must not judge people by their looks, even though the ancient wiring in our brains urges us to do so.  As Jews, we are given mitzvot (commandments) about how to treat people precisely because our instincts can deceive us.

In fact, our tradition directs us to judge others on their behavior. It urges us to go past our instincts, past our conditioning, past the easy answers to look at what a person does to determine their worth. In the Book of Ruth, a Moabite woman treats those around her with kindness and care. The fact that she is a member of a race much hated by the Jews of the time is neither here nor there; in fact, she merits becoming an ancestor of King David.

King David was beautiful; men and women fell in love with him. However, the prophet Nathan rebuked him, and God punished him, because he had one of his soldiers put in the front lines to be killed, so that David could enjoy the widow. David was physically beautiful, but he did an evil thing, and the Torah is clear that there are no excuses, even for beautiful princes.

The line I took away from my adventure in the rainforest was, “Don’t be a mono! Mind the garrobo!” Don’t be a pretty, privileged person who takes advantage of the weak, ugly person. Never forget that at the end of Creation, God said, “It is very good” – even the garrobo.

END_OF_DOCUMENT_TOKEN_TO_BE_REPLACED

Judaism encourages us to awaken each day with thoughts of gratitude. I recite the Modeh Ani each day to thank the Divine for returning my soul. I was recently asked where our soul goes while we sleep. This poem is my response.
Summer Youth Experiences
Image