My Mother vs. the Angel of Death

A Friday the Thirteenth Reflection on Jews and Superstition
May 13, 2016Aron Hirt-Manheimer
Image 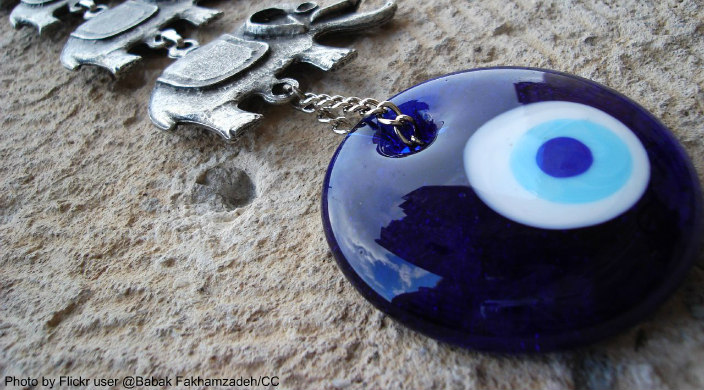 When my mother was born in the Polish town of Dabrowa Gornicza in 1921, her Hasidic parents sought their rebbe’s advice on how to protect their infant from the sword of malach-hamavet, the angel of death.

They had good reason to fear. They had lost a son and daughter in the scarlet fever epidemic of 1909, which was followed by the outbreak of World War I in 1914, and the worldwide influenza pandemic in 1918. The angel of death, it seemed, was insatiable.

“Here is what you must do,” the rebbe said, instructing them to:

Why do names or birthdays matter?

The first two strategies – changing the name and date of birth – were intended to throw the angel of death off track. In Jewish folklore, the malach-hamavet was a messenger of God who was not considered bright or brave. Parents named newborns after scary animals – Aryeh (lion), Dov (bear), Zev (wolf) – or stinging insects – Devorah (bee) – to frighten away the angel of death.

Why wear only white?

Evil spirits were thought to dwell in the shadows, shun the light, act at night, and be repulsed by the color white. This notion gave rise to brides and grooms wearing white at weddings. It was believed that most encounters with the angel of death occurred on the wedding night, when either the bride or groom was a target. The idea of white representing purity or innocence was a later interpretation.

To guard against evil spirits, amulets with various inscriptions are worn or placed where demons are thought to prowl. For example, there are amulets designed to chase away the child-snatching demon Lillith. They bear the names of three angels – Sinoi, Sinsinoi, and Samengelof – whom God dispatched to subdue her. They’re placed near children’s beds.

A popular hand-shaped amulet that incorporates the image of an eye (called a yad or hamsa) is believed to guard against a reversal of good fortune caused by envy. The eye figures as well in the Hebrew expression: bli ayin hara (without the evil eye) and in Yiddish: kein ayin hora, or the colloquial: k’naine-nehora.

Hanging a spider and quicksilver from the neck was used as early as the mid-14th century in Europe as a way to ward off disease at the time of the Black Death. According to Joseph P. Byrne, author of The Black Death, “poisons such as mercury and arsenic were used in amulets… [people also] “experimented with various combinations of arsenic… mercury, silver, pearls, and even toads and spiders.”

Jewish tradition is ambivalent about the status of spiders. On the one hand, we read in the Torah that anything that has many legs is an abomination and shall not be eaten (Leviticus 11:42). In that spirit, my parents warned me:  “A shpin in the morgen macht zorgen” – “A spider in the morning brings worries” – a creepy omen passed down from generation to generation.

Alternately, consider this midrash (rabbinic interpretation of Torah): David, the future king of Israel, notices a spider making its web and asks God, “What is the purpose of spiders?” God responds, “The day will come when you will have your answer. Years later, David hides from King Saul’s army in a cave. A spider suddenly appears and spins a web across the entrance. When the soldiers arrive and see the undisturbed web, they withdraw, and David is saved.

Was the angel of death foiled?

My mother survived her childhood, but came close to death in the Holocaust. After four years of slave labor in a concentration camp, she was forced on a five-month death march during the winter 1945. One day, she noticed a doghouse in a yard and broke rank in search of food scraps. The German guard known as the sheeser (the shooter), because he took pleasure in shooting prisoners with his golden pistol, caught her. Inexplicably, he did not kill her; instead, he berated her for her audacity in trying to escape in broad daylight, and commanded her to get back in line. Later that day, he brought her the little pillow she had left in the doghouse.

Did the rebbe’s prescription actually save my mother?

My mother has had so many other close calls in her life, I call her “the miraculous woman.” Today Alta Fruma (Grandma Adela) is 95 – or is it 96? Nobody knows for sure, and it is best to keep it that way. She is healthy, active, and has eight great grandchildren.