A Brief History of Latkes: Why We Really Eat Them on Hanukkah 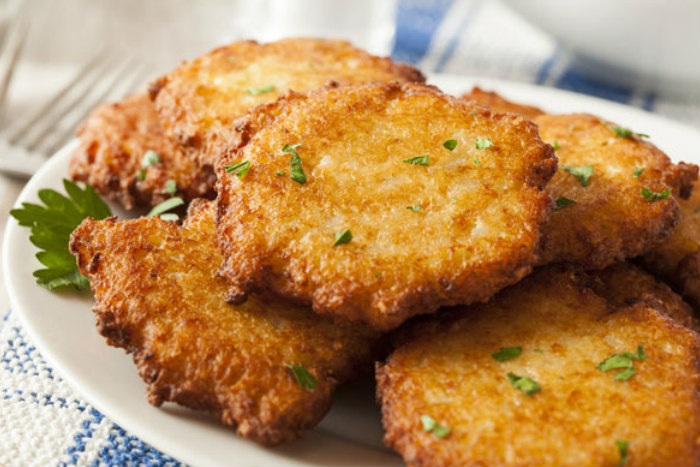 So you think you know why we eat latkes for Hanukkah? The miracle of the oil lasting for eight days instead of one, right? Maybe. Did that really happen or did we need it to happen?

We do know that the Maccabees conquered the Temple Mount and secured fresh oil to rekindle the ner tamidner tamidנֵר תָּמִיד"Eternal light;" the light that hangs above the ark in every synagogue; symbolizes God's omnipresence in our lives. in the Holy Temple. The Jews had to forego the observance of Sukkot during the battle, but they celebrated the Maccabees by waving branches and carrying torches to the Temple, lighting the skies and creating an eight-day "festival of lights" (a phrase coined by Josephus centuries later) to commemorate the Maccabees' triumph.

Fast-forward to the Babylonian exile, a time when the rabbis were disconnected by centuries from the now-corrupt Maccabean dynasty, and dislocated from their religious homeland. It would take a miracle to end their exile and reunite them with their homeland. The miracle of the oil lasting eight days seemed a fitting tale to embrace.

Generations later, in some parts of the world, our ancestors exploited this story to create simple foods that told a story - but fried foods are not traditional throughout the Diaspora. Cheese-based foods are also common, and they represent another tale.

The Greeks and Romans are not the only culture to create their own mythologies. We have the story of Judith, a Jewish heroine who saved her village when she heard that General Holofernes was approaching with his army to annihilate the Jews.

Judith created a plan to thwart his efforts. Beautifully dressed, she brought a tray of salty cheese and a jug of wine to Holofernes' tent. She plied him with salty cheese; he got thirsty and drank some wine. She encouraged him to eat more and thus drink more (why do you think bars serve pretzels and peanuts?) until he became so drunk that he fell asleep. Legend has it that Judith cut off his head, placed it on a staff and presented it to the awaiting army, who became so fearful that they retreated and the Jews were saved.

A great tale that is, alas, not age-appropriate for most religious school students – hence the popularity of the oil story!

Let's examine the real history of latkeslatkeלְבִיבָה"Pancake" (Yiddish); fried potato pancake often eaten on Hanukkah; plural: latkes. . First, the recipe was not created until the end of the 18th or early 19th century. Although potatoes were introduced to Europe in the 16th century, it took close to 200 years before the edible tuber made its way from animal fodder to prison food, and then to sustenance for the masses, especially the poor.

The real reason for latkes is explained by the traditional activity of slaughtering the geese in early December.

For three months before slaughter, geese were slowly and methodically fed at increasing intervals and quantities to fatten them to excess. In fact, it was French Jews who were most influential in the foie gras industry because of this knowledge.

Goose feathers and down were used for warmth, the meat was preserved as a confit for winter consumption, and goose fat was rendered to provide cooking oil for most of the year. Even a poor person could find a potato in the field, an onion in the cellar, and some of the precious, newly-rendered goose fat to create the Hanukkah culinary story of neis gadol hayah sham, "a great miracle happened there." This story sustained us both nutritionally and emotionally during a hard life of persecution and isolation away from Eretz Yisrael, the land of Israel.

In warmer climates, Judith's story translates into cheese pancakes – some salty, and others sweet and delicate, like Italian Lemon Ricotta Pancakes. The Moroccans often celebrate Hanukkah and other festive occasions with Sweet Couscous with Mixed Dried Fruits.

Throughout the recipes, though, a common denominator prevails: We remember that perseverance of deed and thought will keep our people united and strong regardless of where we reside.

Looking for even more holiday foods? Browse all of our Hanukkah recipes, and learn how to best bake and enjoy potato pancakes.