God's Name is a Four-Letter Word 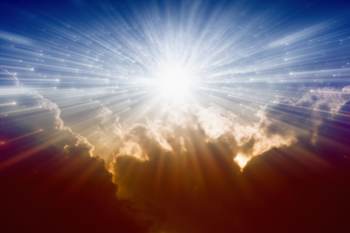 We have lost the correct pronunciation of this name. Originally, because our ancestors worried about taking God’s name in vain, they decreed that this name would be recited only on Yom Kippur, when the Kohen Gadol, or High Priest, entered the inner sanctum of the Temple in Jerusalem. Passed down from Kohen Gadol to Kohen Gadol, generation after generation, the correct pronunciation was lost when the priesthood collapsed with the destruction of the Temple in 70 CE.

Adonai is a Euphemism
Today we pronounce Yud-Hey-Vav-Hey as “Adonai,” but this is a euphemism. “Adonai” means “Lord,” and to the ancient Israelites, God was the regal being who benevolently lorded over us, as the landed Lords of the British Empire lorded over their subjects. One religious group combined the vowels of Adonai with the letters YHVH to invent Yehovah or Jehovah, while scholars and other groups merely sounded out the letters, creating Yahweh. Each of these misses the essence.

Rabbi Lawrence Kushner, the Reform Jewish scholar-mystic, writes, “…in truth [these four letters] are unutterable. Not because of the holiness they evoke, but because they are all vowels and you cannot pronounce all the vowels at once without risking respiratory injury. The word is the sound of breathing. The holiest name in the world, the Name of the Creator, is the sound of your own breathing.”

Rabbi Kushner continues, “that these letters are unpronounceable is no accident.”

Now in Hebrew, the vowel “Vav” can be interchangeable with the vowel “yud.” Thus Hey-Vav-Hey may be read Hey-Yud-Hey to form the word “haya.” “Haya” is the past tense, meaning “was.”

You know where this is going. In Hebrew, when you place the letter “yud” before a verb, the tense changes from past to future. "Haya" becomes "yihiye", “was” becomes “will be.”

So Who or What is God?
From an unutterable four-letter word comes a multilayered understanding of God. God is that which simultaneously is, was and will be.

“God’s Name,” to quote Rabbi Kushner, “is the Name of Existence itself.” Or more clearly, God is Existence.

Do you believe in God? Does it matter? We are all part of the river of life that was, is, and will be forever more. Perhaps the more appropriate question is: Are you living life consciously, mindfully and in connection with everyone and everything else in existence?

Rabbi Paul Kipnes is spiritual leader of Congregation Or Ami in Calabasas, CA.

Rabbi Paul Kipnes is the spiritual leader of Congregation Or Ami in Calabasas, CA. He serves as rabbinic dean at URJ Camp Newman in Santa Rosa, CA, and as vice president of the Central Conference of American Rabbis. Rabbi Kipnes and his wife Michelle November co-wrote Jewish Spiritual Parenting: Wisdom, Activities, Rituals and Prayers for Raising Children with Spiritual Balance and Emotional Wholeness (Jewish Lights). He also co-edited a national CCAR Journal issue on New Visions for Jewish Community.

Under his leadership, Congregation Or Ami has won national awards for social justice programming, for innovative worship programming, for outreach to interfaith families, and for engaging family education, and for best overall use of technology in a synagogue. Or Ami also wins the hearts of its families for its Henaynu caring community, which reaches out during times of need. He serves on the Rhea Hirsch School of Jewish Education clinical faculty at Hebrew Union College-Jewish Institute of Religion in Los Angeles. His writings can be viewed on his blog, Or Am I? and he tweets at @RabbiKip.