The History of Hanukkah Gifts: Is This Custom Really a Jewish One? 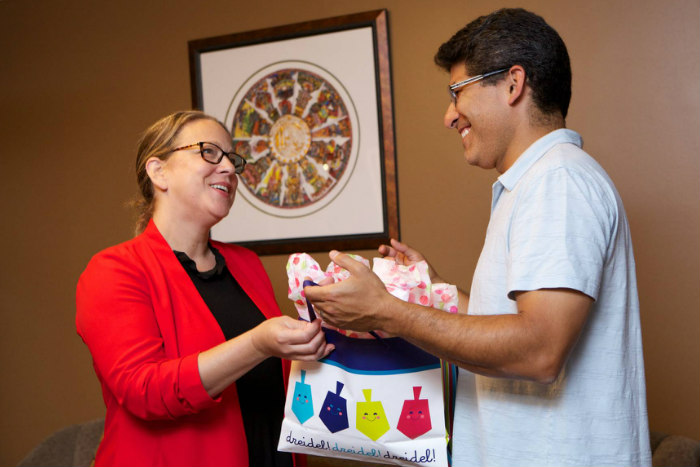 A couple of years ago, a student in my Introduction to Judaism class asked me why Jews gave gifts for Hanukkah. I told her I had no idea but my guess is that the custom is primarily borrowed from Christmas. I told her I would investigate and get back to her.

As I started to research, I discovered that there was not a direct answer to her question. I was shocked. All Jewish rituals have a story, or more accurately, many stories. How could it be that Hanukkah gift-giving, a widespread ritual, is simply borrowed from Christmas?

As I set out to uncover the Jewish background behind gift-giving for my rabbinic thesis, I discovered that my initial hypothesis is actually mostly correct; the contemporary custom of wrapping presents of toys, clothes, and jewelry arose in conjunction with Christmas. That said, many aspects of the gift-giving ritual have distinctly Jewish roots, each of which has helped set the stage for the development of the ritual into what it is today.

The first way we can understand gift-giving as a Jewish custom is in the connection between giving gifts and offering sacrifices at the Temple. The original story of Hanukkah, as told in the first and second books of MaccabeesMaccabeesמַכַּבִּיםThe family of five sons who led the revolt against the Hellenization of Jerusalem and became the heroes of the Hanukkah story. , is entirely centered on sacrifice. The Greeks in this time replaced sacrificial worship with pagan worship, which then led to rebellion and war. When the Jews unexpectedly defeated the stronger and bigger Greek army, they set out to restore the Temple and altar that the Greeks destroyed. They established the festival of Hanukkah as a way to celebrate the rededication (Hanukkah in Hebrew) of the altar that enabled them to once again offer sacrifices to God (I Maccabees 4:42-56).

Though the text in the book of Maccabees does not detail what the rededication of the altar looked like, we can postulate that it resembled the dedication ceremonies described in the bible, particularly the dedication of the Tabernacle in Numbers 7. In this chapter, we learn that the chieftains of Israel brought various presents to the Tabernacle. Among the presents they brought were physical items used in facilitating sacrifice, including silver basins, bowls, and ladles (Numbers 7:1-8:3). A Hanukkah gift is, therefore, a gift that enables us to worship God, and this is precisely how the Jews celebrated the festival of Hanukkah in the years following their victory over the Greeks.

Everything changed after the destruction of the Temple in 70 CE.

Sacrifice was no longer possible and the understanding of how to worship God shifted from sacrifice to study and prayer. For this reason, the festival of Hanukkah could have transformed into a gift-giving holiday. Instead of giving gifts to facilitate sacrifice, one would give gifts to facilitate acts of study or prayer. Instead of giving a silver basin, one might give a tallittallitטַלִּיתPrayer shawl; plural: tallitot  or a chumashChumashחֻמָּשׁThe Torah in the form of a book. The word “Chumash” derives from the Hebrew word chamesh (five) because the Torah is the first five books of the Bible. Used during communal worship and study, the Chumash often includes commentaries on the Torah text. . As we know, however, the rabbis took the celebration of Hanukkah in a different direction. They introduced the miracle of the oil and focused on the laws surrounding the lighting of the menorahmenorahמְנוֹרָהSeven- or nine-branched candelabra; commonly refers to the nine-branched Hanukkah lamp; plural: menorot. .

The second way we can understand gift-giving as a Jewish custom is with the introduction of Hanukkah geltgeltכֶּסֶף"Money" (Yiddish); often given as a Hanukkah gift; used for playing dreidel. in Europe during the 18th century.

Many believe this custom developed because of the etymological connection between Hanukkah and education. Chinuch (education) shares the same Hebrew root (Chet/nun/chaf) as Chanukah (dedication). For this reason, education and specifically Torah study became a central practice during Hanukkah. Historian Eliezer Segal suggests that families began to use these Torah study sessions during Hanukkah as an opportunity to give small amounts of money to teachers, who were otherwise prohibited from accepting money for teaching Torah. Parents would give children money to give to their teachers, and eventually, Segal suggests, the children began to expect it themselves. This, he says, might be the origin of the practice of giving Gelt during Hanukkah.

There are some, however, who date the practice much earlier. In The Original Chanukah Gelt, Marvin Tameanko argues that this custom dates back to the very first Hanukkah festival celebrated by the Maccabees. He points to the then common practice of taking war booty: when the Jews destroyed the Greek armies, they took weapons, armor, horses, and coins (I Maccabees 3:41). These coins were distributed to victorious soldiers, widows, and orphans of the dead, as well as the general population, including children. Tameanko suggests that this could be the origin of Hanukkah gelt.

The third way to understand gift-giving as a Jewish custom is by reinterpreting Hanukkah as a holiday that has always celebrated the interplay between Judaism and the dominant culture of the time. In his book The Jewish Way: Living the Holidays, Irvin Greenberg says that “Hanukkah is the paradigm of the relationship between acculturation and assimilation where each generation has interpreted Hanukkah in its own image, speaking to its own needs.” He discusses how the story of Hanukkah began because of the blending of Greek and Eastern cultures. Hellenism attracted the Jewish elite, and in fact, there were some Jews who favored aggressive assimilation. Gift giving is the prime example of a custom that was, and still is, borrowed from the dominant culture.

In addition to Jews using foreign coins as Hanukkah gelt, gift-giving was generally practiced in Greek culture during the time of the book of Maccabees. There are three examples in the books of Maccabees that describe Greeks engaging in the practice of gift-giving.

In the first example, King Anthiochus’ officers tell Mattathias they will give him gold, silver, and gifts if he makes a pagan sacrifice (I Maccabees 2:15-28). In the second, King Antiochus realizes that his wealth diminished during the war, and he laments that he will no longer be able to give gifts the way he used to (I Maccabees 3:30). In the third example, the King of Persia turns a holy site into a shrine and uses the money he makes from it to give gifts to his friends (II Maccabees 1:34-35).

Each of these examples speaks to the fact that gift-giving was a prevalent practice in Greek culture during the time of the story of Hanukkah. It sets the stage for a discussion about how Jews borrow from and engage with the dominant culture of their time. If Hanukkah is a time for thinking about what it means to be a free people who also live and participate in greater society, it is a perfect opportunity to think about what it means to share practices with others and whether a borrowed ritual can still be considered Jewish.

For gift ideas, check out "8 Experiential Hanukkah Gifts that Teach Kids about Jewish Values" and "A Social Justice Gift Guide for Hanukkah."