While Herzl and others were laying the groundwork outside of Palestine for a state, many Jews were moving there from Europe in waves called aliyot. The first wave, known as the “First Aliyah,” took place prior to political Zionism, in the late 1800s. Most of these new immigrants came from Russia and Yemen, and set up towns including Petah Tikvah, Rishon LeZion and Zikhron Ya’akov. The Second Aliyah , prior to World War I, was almost exclusively made up of Russian Jews, following pogroms and anti-Semitism in their country. Inspired by Socialism and Jewish nationalism, this group started the first kibbutz and revived the Hebrew language.

After World War I and until 1923, the Third Aliyah came to Israel. This group was also from Russia, but they arrived after the establishment of the British Mandate over Palestine and the Balfour Declaration and set about creating a sustainable Jewish agricultural economy by strengthening and building the kibbutz movement and its ancillary institutions. The Fourth Aliyah, which took place over a short period of time from 1924 to 1929, was mostly made up of Jews seeking to escape anti-Semitism in Poland and Hungary. Many of these immigrants were made up of middle-class families who established small businesses and created a more rounded economy.

The Fifth Aliyah coincided with the rise of Nazism in Germany and extreme nationalism across Eastern Europe and included the largest number of immigrants to date- nearly one quarter of a million Jews entered Mandate Palestine between 1929 and the beginning of World War II. This group of immigrants included professionals, doctors, lawyers and artists. They created a thriving art and architecture scene, and with the establishment of the Port of Haifa, a thriving economy. Most arrived prior to 1936, when the British began imposing harsh restrictions on Jewish immigration as a result of increasing anger and violence in the Palestinian Arab community. In 1939, the British issued the White Paper of 1939, which severely restricted Jewish immigration, leaving many European Jews during the Holocaust with nowhere to go. Illegal immigration, though dangerous, became a necessity. By the time the United Nations agreed to split Palestine into Jewish and Arab states, a very well ordered and lively Jewish society had been created there.

When war broke out between Israel and the Arab states in 1948, many of the Jews living in Arab countries fled to Israel under threat of persecution and a desire to fulfill the Zionist dream. As anti-Zionism and anti-Semitism increased in the Arab world, Jewish emigration continued until the early 1970s. Many were forced to abandon their properties and belongings before leaving. Today, there are only a few very small Jewish communities remaining in the Middle East outside of Israel.

Ethiopian Jews (members of the Beta Israel tribe) began moving to Israel as early as 1934, however it was not until the late 1970s-early 1980s that they immigrated en masse. In 1979, aliyah activists began convincing Ethiopians to flee Ethiopia and head to Sudan, where they could be moved from refugee camps to Israel. This led to two major covert operations- Moses in 1984 and Solomon in 1991- that brought nearly the entire tribe over to Israel.

By 1984, thousands of Ethiopian Jews had fled to Sudan, braving extremely dangerous conditions- it is estimated that 4,000 died along the way. Sudan secretly allowed Israel to begin transporting refugees, until word got out and external pressures forced them to suspend the operation. Many refugees were left behind, with some evacuated shortly after in a US-led operation.

In 1991, as the situation worsened in Ethiopia, the Israeli government knew that it had to act quickly, before the rebels took over, to evacuate the rest of Beta Israel. In Operation Solomon, they managed to evacuate over 14,000 Ethiopians (nearly twice as many as were taken in Operation Moses) in 34 El Al planes with the seats removed to maximize capacity. The entire operation took place over 36 hours.

During the Cold War, Jews in the Soviet Union were not allowed to practice their religion and many were denied the right to emigrate. Because of anti-religious sentiment in the Soviet Union, many were raised in secular homes and nearly 1/3 were not considered halachically Jewish, though they were able to immigrate under the Right of Return. Under the more liberal government of Mikhail Gorbachev in the early 1990s, Jews were allowed to emigrate and they did so en masse- nearly 1 million Russian Jews moved to Israel in the 1990s. 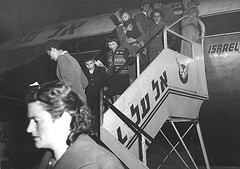