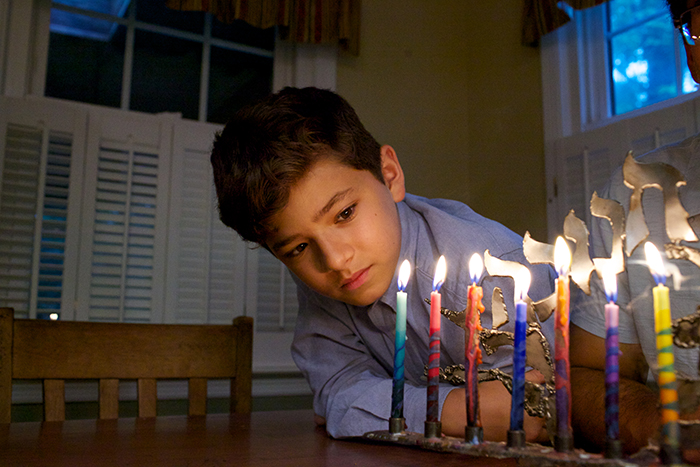 Hanukkah, a joyous celebration of family, freedom, and light, is a holiday primarily celebrated at home, beginning on the 25th day of the Hebrew month of Kislev (usually falling in December) and lasting for eight days. At what is the coldest, darkest time of the year for many people, we celebrate by bringing light and warmth into our homes, into our communities and into the world around us. In the TalmudTalmudתַּלְמוּדThe Jewish legal work that comprises the Mishnah and the Gemara. There are two works of Talmud: The Palestinian Talmud was compiled between 200-450 C.E. in the land of Israel and is also called the Jerusalem Talmud or Talmud Yerushalmi. The Babylonian Talmud or Talmud Bavli was compiled in Babylonia between 200-550 C.E.   , the rabbis taught that the mitzvah mitzvahמִצְוָהLiterally, “commandment." A sacred obligation. Jewish tradition says the Torah contains 613 mitzvot Mitzvot refer to both religious and ethical obligations. of Hanukkah, the commandment at the heart of the observance of the holiday, is a “candle for each man and his household” (the modern Reform understanding is that this text refers to everyone, not just men). So the actual mitzvah, or commandment, of Hanukkah is to kindle the Hanukkah lights at home, ideally with family and friends!

Blessings are recited when lighting the candles, which are held in a nine-branched menorahmenorahמְנוֹרָהSeven- or nine-branched candelabra; commonly refers to the nine-branched Hanukkah lamp; plural: menorot. (also called a hanukkiyahhanukkiyahחֲנֻכִּיָּהNine-branched candelabra used during Hanukkah – eight branches for each night of the holiday, plus another branch (often taller, central, or more prominently displayed) for the shamash (helper) candle, which is used to light the others. ). In some families, members of the household, including the children, light their own Hanukkah menorah. Many families use the eight-day period of Hanukkah to spend time together each night.

Another mitzvah of Hanukkah is pirsum hanes, the public proclamation of the miraculous events that transpired in the days of the MaccabeesMaccabeesמַכַּבִּיםThe family of five sons who led the revolt against the Hellenization of Jerusalem and became the heroes of the Hanukkah story. . A number of Hanukkah observances are connected with this requirement. The Hanukkah lights are lit at sundown, the time when passers-by are most likely to see them. When possible, the menorah is placed in a window or elsewhere in the home so that it can be seen from the outside. This custom is especially prevalent in Israel, where cities and towns hold public menorah-lighting ceremonies and the entire country is full of candles, bright with the celebration of the Festival of Lights.

Ritual objects associated with Hanukkah include the menorah and the dreideldreidelסְבִיבוֹן"Spinning top" in Yiddish (derived from German); "sevivon" in Hebrew; toy used in a children's Hanukkah game. .

Menorah is a Hebrew word meaning “candelabrum” and sometimes refers to the nine-branched ceremonial lamp in which the Hanukkah candles are placed and blessed each night of the holiday. The nine branches include eight branches, one for each day of the holiday, and one branch for the shamashshamashשַׁמָּשׁHelper candle used to light the other candles in a menorah.  candle that is used to light the other candles. In ancient times, oil was used in the menorah. Over time, candles were substituted for oil. The Hanukkah menorah can also be called a hanukkiyah.

The word dreidel derives from a German word meaning “spinning top,” and is the toy used in a Hanukkah game adapted from an old German gambling game. (Historically, Hanukkah was one of the few times of the year when rabbis permitted games of chance.) The four sides of the top bear four Hebrew letters: nun, gimel, hey, and shin. Players begin by putting into a central pot or “kitty” a certain number of coins, foil-wrapped chocolate disks known as geltgeltכֶּסֶף"Money" (Yiddish); often given as a Hanukkah gift; used for playing dreidel. , nuts, buttons or other small objects. Each player in turn spins the dreidel and proceeds as follows:

Over time, the letters on the dreidel were reinterpreted to stand for the first letter of each word in the Hebrew statement, “Neis gadol hayah sham,” which means “A great miracle happened there” and refers to the defeat of the Syrian army and the re-dedication of the Temple. In Israel, one letter on the dreidel differs from those used in the rest of the world. The shin has been replaced with a pey, transforming the Hebrew statement into “Neis gadol hayah po,” which means “A great miracle happened here.”

For many families and communities, singing is a particularly joyous part of Hanukkah celebrations. There are many traditional and contemporary songs for the holiday, and videos and recordings are widely available online.

“Maoz Tzur” (“Rock of Ages”) is customarily sung after the lighting of the candles each night, and at other times throughout the holiday. It was composed in Europe in the 12th or 13th century.

“I Have a Little Dreidel” is a modern-day children’s song frequently sung during the Festival of Lights. Other holiday favorites include “Hanukkah, Oh Hanukkah;” “Sivivon, sov, sov, sov,” a Hebrew folksong; “Light One Candle,” written by Peter Yarrow; and “The Latke Song,” by Debbie Friedman, z"l, the renowned Jewish singer and songwriter.

Inclusions in our worship services held during Hanukkah are the additions of the Al HaNisim (“for the miracles”) passage in the AmidahAmidahעֲמִידָהLiterally, “standing.” A central prayer of the worship service, often recited privately. A chain of blessings in which the first three and final three are always the same, and the intermediate blessings change based on the day (i.e., Shabbat, weekday, holidays). Also called the Sh’moneh Esreih (literally, “eighteen”) and HaT’fila (literally, “the Prayer”).   (the central prayer in worship, recited while standing) and in Birkat HaMazonBirkat HaMazonבִּרְכַּת הַמָּזוֹןBlessing after meals. A series of blessings recited after meals, including blessings that express gratitude for sustenance, the land, Jerusalem, and the positive relationship between God and the Jewish people. There are liturgical variations/additions to Birkat HaMazon for Shabbat, festivals, and weddings. .

In some congregations, on the Shabbat during Hanukkah families are invited to bring their own hanukkiyot to Friday night services and everyone lights them together in community.

In addition, we read special Torah portions during the holiday. The Torah reading for each day of Hanukkah is taken from Numbers 6:22-8:4, which recounts the dedication of the Mishkan (temporary, moveable place of worship) by the Israelites in the desert. On Shabbat during Hanukkah, we read the regular weekly portion. During Hanukkah, the haftarah haftarahהַפְטָרָהSelection from the Prophets read or chanted after the weekly Torah portion; plural: haftarot readings are Zechariah 4:1-7 and I Kings 7:40-50.

Preparing for the Holiday

To prepare to celebrate Hanukkah at home, you will need candles and a Hanukkah menorah with nine candle holders (also called a hanukkiyah), or, as is the custom in some families, one menorah for each member of the family. (For those living in places where open flames aren’t allowed or are unsafe, or those who are traveling, electric menorahs are widely available.) You also can decide together as a family how to celebrate each night of the holiday – whether with activities, cooking, or by bringing a social justice element to the holiday.

Many families like to exchange gifts during Hanukkah, and some families also use the opportunity to give charitable gifts. Designating the sixth evening as the Ner Shel Tzedakah (“Candle of Righteousness”) offers an opportunity to learn about poverty or other social justice issues and to make a donation or engage in other activities related to a cause that is important to you and/or your family. This social justice gift guide offers suggestions that emphasize tikkun olamtikkun olamתִּקּוּן עוֹלָם"Repair of the world;" Jewish concept that it is our responsibility to partner with God to improve the world. A mystical concept of restoration of God's holiest Name to itself and the repair of a shattered world. Often refers to social action and social justice. .

From one Hanukkah to the next, it can be a challenge to remember in which direction to add candles and in which direction to light them. Here’s what you need to know: When the menorah is facing you, the candle for the first night is placed in the right-most holder of the eight-branched menorah and the shamashshamashשַׁמָּשׁHelper candle used to light the other candles in a menorah.  is placed in its holder, which is raised or otherwise distinguished from the rest of the candleholders.

Two blessings are chanted or recited every night of Hanukkah. The first is a blessing over the candles themselves. The second blessing expresses thanks for the miracle of deliverance. A third blessing – the Shehecheyanu prayer, marking all joyous occasions in Jewish life – is chanted or recited only on the first night.

On each successive night, an additional candle is placed to the immediate left of the previous night’s candle, and the candles are lit from left to right, so the kindling begins with the newest light. Since these lights are holy, we aren’t supposed to make practical use of them (e.g., using them to see or read by, or lighting other candles with them); therefore, we use the shamash to light the ones that mark each night of the holiday.

Learn how to light the candle with this video from Shaboom!