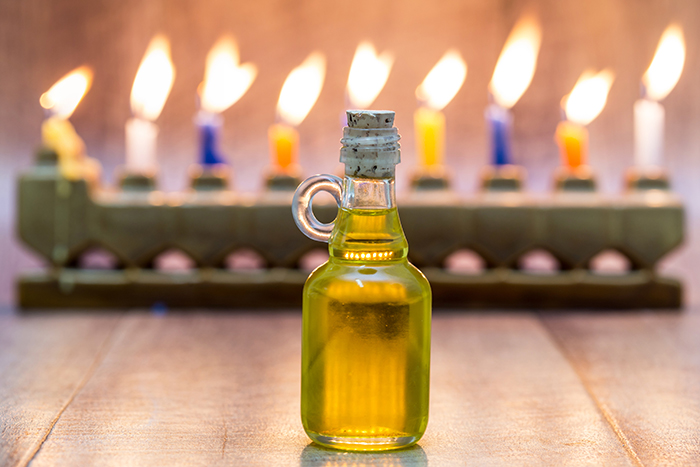 Although according to Jewish custom Hanukkah is considered a “minor” Jewish festival, today it ranks—along with Passover and Purim—as one of the most beloved Jewish holidays, full of light and joy and family celebration.

Unlike many Jewish holidays, Hanukkah (also known as the Festival of Lights) is not mentioned in the Bible. The historical events upon which the celebration is based are recorded in Maccabees I and II, two books contained within a later collection of writings known as the Apocrypha.

In the year 168 B.C.E., the Syrian king Antiochus Epiphanes sent his soldiers to Jerusalem. The Syrians desecrated the Temple, the holiest place for Jews at that time. Antiochus also abolished Judaism, outlawing the observance of Shabbat and the Festivals, as well as circumcision. Altars and idols were set up for the worship of Greek gods, and he offered Jews two options: conversion or death.

On the 25th day of the Hebrew month of Kislev in 168 B.C.E., the Temple was renamed for the Greek god Zeus. A Jewish resistance movement – led by a priestly family known as the Hasmoneans, or Maccabees – developed against the cruelty of Antiochus. The head of the family was Mattathias, an elderly man.  His son, Judah, became the chief strategist and military leader of the resistance. Though outnumbered, Judah Maccabee and his fighters miraculously won two major battles, routing the Syrians decisively.

Although historians debate the causes and outcomes of the war in which Judah Maccabee and his followers defeated the Syrian armies of Antiochus, there is no doubt that Hanukkah evokes stirring images of Jewish valor against overwhelming odds. Other themes of the holiday include the refusal to submit to the religious demands of an empire practicing idolatry, the struggle against total assimilation into Greek culture and loss of Jewish identity, and the fight for Jewish political autonomy and self-determination.

Hanukkah, which means “dedication,” is the festival that commemorates the purification and rededication of the Temple following the Greek occupation of that holy place. Today, the holiday reminds Jews to rededicate themselves to keeping alive the flame of Jewish religion, culture, and peoplehood so that it may be passed on to the next generation.

The Miracle of the Oil

Originally, the eight-day holiday was intended to parallel the eight-day festival of Sukkot. The Books of the Maccabees made no mention of the legend concerning a small jar of oil that unexpectedly lasted for eight days. Only centuries after the Maccabees’ defeat of the Syrians did the story of the jar of oil – which has come to be associated with Hanukkah – appear in the Talmud.

According to the legend, when the Maccabees entered the Temple and began to reclaim it from the Greeks, they immediately relit the ner tamidner tamidנֵר תָּמִיד"Eternal light;" the light that hangs above the ark in every synagogue; symbolizes God's omnipresence in our lives. , which burned constantly in the Temple and has a parallel in our synagogues to this day. In the Temple, they found a single jar of oil, which was sufficient for only one day. The messenger who was sent to secure additional oil took eight days to complete his mission, and miraculously, the single jar of oil continued to burn until his return. The rabbis of the Talmud attributed the eight days of Hanukkah to the miracle of this single jar of oil.

Although the practice of lighting the menorah menorahמְנוֹרָהSeven- or nine-branched candelabra; commonly refers to the nine-branched Hanukkah lamp; plural: menorot. (also called a hanukkiyahhanukkiyahחֲנֻכִּיָּהNine-branched candelabra used during Hanukkah – eight branches for each night of the holiday, plus another branch (often taller, central, or more prominently displayed) for the shamash (helper) candle, which is used to light the others. ) was common throughout much of the 19th century, North American Jews tended to neglect most of the other traditions and practices associated with the holiday. By the 1920s, however, Jews increasingly added gift-giving to their Hanukkah celebrations, prompting some people to refer to Hanukkah as the "Jewish Christmas."

In some ways, the transformation of Hanukkah was linked to the growth of North American Jewry within its unique environment. The elevation of Hanukkah to a major holiday was partly the result of Jews acculturating themselves to a North America that was overwhelmingly Christian in population and symbols.

Although Hanukkah had become an important holiday among North American Jews by the 1920s, it would be incorrect to regard it as an imitation of Christmas with an emphasis on the exchange of presents. Rather, North American Jews use this holiday as a celebration of family, reinforcing Jewish identity in a place whose population may be overwhelmingly Christian but in which Jews feel at home. Hanukkah, therefore, is a means for North American Jews to feel a kinship with their neighbors, while simultaneously asserting their Jewish distinctiveness.