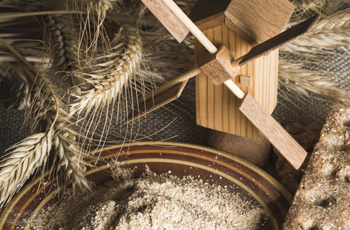 6:1] The Eternal One spoke to Moses, saying: 2] Command Aaron and his sons thus:

7] And this is the ritual of the meal offering: Aaron’s sons shall present it before the Eternal, in front of the altar. 8] A handful of the choice flour and oil of the meal offering shall be taken from it, with all the frankincense that is on the meal offering, and this token portion shall be turned into smoke on the altar as a pleasing odor to the Eternal. 9] What is left of it shall be eaten by Aaron and his sons; it shall be eaten as unleavened cakes, in the sacred precinct; they shall eat it in the enclosure of the Tent of Meeting. 10] It shall not be baked with leaven; I have given it as their portion from My offerings by fire; it is most holy, like the purgation offering and the reparation offering. 11] Only the males among Aaron’s descendants may eat of it, as their due for all time throughout the ages from the Eternal’s offerings by fire. Anything that touches these shall become holy.

12] The Eternal One spoke to Moses, saying: 13] This is the offering that Aaron and his sons shall offer to the Eternal on the occasion of his anointment: a tenth of an eifah of choice flour as a regular meal offering, half of it in the morning and half of it in the evening, 14] shall be prepared with oil on a griddle. You shall bring it well soaked, and offer it as a meal offering of baked slices, of pleasing odor to the Eternal. 15] And so shall the priest, anointed from among his sons to succeed him, prepare it; it is the Eternal’s—a law for all time—to be turned entirely into smoke. 16] So, too, every meal offering of a priest shall be a whole offering: it shall not be eaten.

17] The Eternal One spoke to Moses, saying: 18] Speak to Aaron and his sons thus: This is the ritual of the purgation offering: the purgation offering shall be slaughtered before the Eternal, at the spot where the burnt offering is slaughtered: it is most holy. 19] The priest who offers it as a purgation offering shall eat of it; it shall be eaten in the sacred precinct, in the enclosure of the Tent of Meeting. 20] Anything that touches its flesh shall become holy; and if any of its blood is spattered upon a garment, you shall wash the bespattered part in the sacred precinct. 21] An earthen vessel in which it was boiled shall be broken; if it was boiled in a copper vessel, [the vessel] shall be scoured and rinsed with water. 22] Only the males in the priestly line may eat of it: it is most holy. 23] But no purgation offering may be eaten from which any blood is brought into the Tent of Meeting for expiation in the sanctuary; any such shall be consumed in fire.

7:1] This is the ritual of the reparation offering: it is most holy. 2] The reparation offering shall be slaughtered at the spot where the burnt offering is slaughtered, and the blood shall be dashed on all sides of the altar. 3] All its fat shall be offered: the broad tail; the fat that covers the entrails; 4] the two kidneys and the fat that is on them at the loins; and the protuberance on the liver, which shall be removed with the kidneys. 5] The priest shall turn them into smoke on the altar as an offering by fire to the Eternal; it is a reparation offering. 6] Only the males in the priestly line may eat of it; it shall be eaten in the sacred precinct: it is most holy.

7] The reparation offering is like the purgation offering. The same rule applies to both: it shall belong to the priest who makes expiation thereby. 8] So, too, the priest who offers a person’s burnt offering shall keep the skin of the burnt offering that was offered. 9] Further, any meal offering that is baked in an oven, and any that is prepared in a pan or on a griddle, shall belong to the priest who offers it. 10] But every other meal offering, with oil mixed in or dry, shall go to the sons of Aaron all alike.

11] This is the ritual of the sacrifice of well-being that one may offer to the Eternal:

22] And the Eternal One spoke to Moses, saying: 23] Speak to the Israelite people thus: You shall eat no fat of ox or sheep or goat. 24] Fat from animals that died or were torn by beasts may be put to any use, but you must not eat it. 25] If anyone eats the fat of animals from which offerings by fire may be made to the Eternal, the person who eats it shall be cut off from kin. 26] And you must not consume any blood, either of bird or of animal, in any of your settlements. 27] Anyone who eats blood shall be cut off from kin.

10] Moses took the anointing oil and anointed the Tabernacle and all that was in it, thus consecrating them. 11] He sprinkled some of it on the altar seven times, anointing the altar, all its utensils, and the laver with its stand, to consecrate them. 12] He poured some of the anointing oil upon Aaron’s head and anointed him, to consecrate him. 13] Moses then brought Aaron’s sons forward, clothed them in tunics, girded them with sashes, and wound turbans upon them, as the Eternal had commanded Moses.

14] He led forward the bull of purgation offering. Aaron and his sons laid their hands upon the head of the bull of purgation offering, 15] and it was slaughtered. Moses took the blood and with his finger put some on each of the horns of the altar, purifying the altar; then he poured out the blood at the base of the altar. Thus he consecrated it in order to make expiation upon it.

16] Moses then took all the fat that was about the entrails, and the protuberance of the liver, and the two kidneys and their fat, and turned them into smoke on the altar. 17] The rest of the bull, its hide, its flesh, and its dung, he put to the fire outside the camp—as the Eternal had commanded Moses.

18] Then he brought forward the ram of burnt offering. Aaron and his sons laid their hands upon the ram’s head, 19] and it was slaughtered. Moses dashed the blood against all sides of the altar. 20] The ram was cut up into sections and Moses turned the head, the sections, and the suet into smoke on the altar; 21] Moses washed the entrails and the legs with water and turned all of the ram into smoke. That was a burnt offering for a pleasing odor, an offering by fire to the Eternal—as the Eternal had commanded Moses.

22] He brought forward the second ram, the ram of ordination. Aaron and his sons laid their hands upon the ram’s head, 23] and it was slaughtered. Moses took some of its blood and put it on the ridge of Aaron’s right ear, and on the thumb of his right hand, and on the big toe of his right foot. 24] Moses then brought forward the sons of Aaron, and put some of the blood on the ridges of their right ears, and on the thumbs of their right hands, and on the big toes of their right feet; and the rest of the blood Moses dashed against every side of the altar. 25] He took the fat—the broad tail, all the fat about the entrails, the protuberance of the liver, and the two kidneys and their fat—and the right thigh. 26] From the basket of unleavened bread that was before the Eternal, he took one cake of unleavened bread, one cake of oil bread, and one wafer, and placed them on the fat parts and on the right thigh. 27] He placed all these on the palms of Aaron and on the palms of his sons, and elevated them as an elevation offering before the Eternal. 28] Then Moses took them from their hands and turned them into smoke on the altar with the burnt offering. This was an ordination offering for a pleasing odor; it was an offering by fire to the Eternal. 29] Moses took the breast and elevated it as an elevation offering before the Eternal; it was Moses’ portion of the ram of ordination—as the Eternal had commanded Moses.

36] And Aaron and his sons did all the things that the Eternal had commanded through Moses.