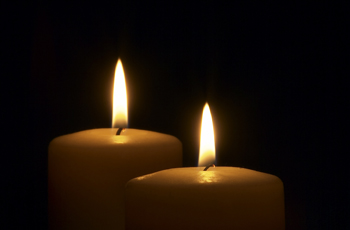 47:28] Jacob lived in the land of Egypt for 17 years; Jacob’s days—the years of his life—were 147. 29] When Israel’s time to die drew near, he summoned his son Joseph and said to him, “If I have but found favor in your sight, please put your hand under my thigh and treat me with faithful kindness; please do not bury me in Egypt. 30] When I [am laid to] rest with my ancestors, carry me out of Egypt and bury me in their burial-place.” He replied, “I will do as you say.” 31] He said, “Swear it to me!” so [Joseph] swore it to him; Israel then bowed down at the head of the bed.

48:1] After these things, they said to Joseph, “Look—your father is fading,” so he took his two sons with him, Ephraim and Manasseh. 2] When they told Jacob, saying, “Look, your son Joseph has come,” Israel rallied and sat up in the bed. 3] Jacob said to Joseph, “El Shaddai appeared to me in Luz in the land of Canaan and blessed me, 4] saying to me: ‘Behold, I will make you fruitful and multiply you; I will make you a multitude of peoples and I will give this land to your seed after you as an everlasting possession.’ 5] Now, then, your two sons born to you in the land of Egypt before my arrival in Egypt—they are mine; Ephraim and Manasseh will be to me like Reuben and Simeon. 6] But your progeny whom you engender after them are yours; they will be called by their brothers’ names in their family allotment. 7] And I—as I was coming from Paddan, Rachel died in the land of Canaan, on the road, only a stretch of ground before reaching Ephrath. I buried her there on the way to Ephrath, that is, Bethlehem.”

8] When Israel saw Joseph’s sons, he asked, “Who are these?” 9] And Joseph said to his father, “They are my sons, whom God has given me here.” He [Jacob] said, “Bring them to me, pray, that I may bless them.” 10] Israel’s eyes had grown clouded with age; he could no longer see. Joseph brought them over to him, whereupon he kissed and hugged them.

11] Israel then said to Joseph, “I never expected to see your face again, and here God has shown me your progeny as well!” 12] Joseph then removed them from his knees, and bowed down before him to the ground. 13] Then Joseph took the two of them, Ephraim with his right hand to Israel’s left, and Manasseh with his left hand to Israel’s right, and he brought them close to him. 14] But Israel stretched out his right hand and placed it on Ephraim’s head, even though he was the younger, and his left hand on Manasseh’s head, crossing his arms, though Manasseh was the first-born. 15] He then blessed Joseph, saying, “The God before whom walked my fathers Abraham and Isaac, the God who has shepherded me ever since I came into being until this day— 16] the angel who has rescued me from all harm—bless these lads! Through them let my name and the name of my fathers Abraham and Isaac [ever] be recalled, and let them greatly multiply within the land!”

17] When Joseph saw that his father had placed his right hand on Ephraim’s head, it seemed wrong to him, so he took hold of his father’s hand to move it from Ephraim’s head onto the head of Manasseh. 18] Joseph said to his father, “Not that way, Father! This is the first-born; put your right hand on his head.” 19] But his father refused, saying, “I know, my son, I know! He too shall become a people, and he too shall be great. Yet his younger brother shall be greater than he, and his seed shall become a multitude of nations.” 20] So he blessed them that day, saying, “By you shall [the people of] Israel give [their] blessing, saying, ‘May God make you like Ephraim and Manasseh.’” And he put Ephraim ahead of Manasseh.

21] Israel then said to Joseph, “I am dying now, but God will be with you and bring you back to the land of your ancestors. 22] And I have given you—first among your brothers—the Shechem mountain-ridge, which I won from the Amorites with my sword and my bow.”

49:1] Jacob then summoned his sons, saying, “Gather ’round that I may tell you what shall befall to you in days to come:

hearken to Israel your father.

you are my strength and first fruit of my vigor,

excessive in exalting [yourself],

Oh, you mounted your father’s bed,

5] Simeon and Levi are partners;

instruments of violence are their plan.

6] Let me not enter their council,

nor let my being join their assembly;

for they killed a man in their wrath,

and in their whim hamstrung an ox.

7] Cursed is their wrath so fierce,

and their fury so harsh!

I will disperse them in Jacob,

scatter them in Israel.

your brothers shall heap praise on you—

your hand on the neck of your foes,

your father’s sons shall bow down to you.

you flourish, my son, from the prey.

10] The staff shall not depart from Judah,

nor the scepter from between his legs,

until he comes to Shiloh,

and the people’s fealty is his.

his ass’s foal to the choicest vine;

he cleanses his garments in wine,

his robe in the blood of grapes.

12] Eyes that sparkle with wine!

13] Zebulun shall dwell at the seashore,

he will be a harbor for ships,

with his farthest reach near Sidon.

lies between the folds,

15] He saw how good was the resting-place,

and how pleasant the ground:

so he bent his shoulder to the burden,

to be subjected to forced labor.

16] Dan will plead his people’s cause

as one of Israel’s tribes.

a horned serpent on the path,

so its rider tumbles backward.

19] Gad shall be raided by raiders,

but shall raid their rearguard.

he provides delicacies for a king.

bears lovely lambs in the folds.

a wild she-ass’s son by a spring,

the wild she-asses at Shur:

shot arrows at him,

the archers were foes to him,

24] yet steady stayed his bow,

Through the Mighty One of Jacob,

through the Shepherd, Israel’s Rock,

Shaddai, who blesses you,

blessings of heaven above,

blessings of the deep that lies below,

blessings of breasts and womb—

26] blessings of your father

the bounty of the timeless hills:

let them be on Joseph’s head,

on the brow of the prince among his brothers.

27] Benjamin is a wolf that rends,

in the morning devouring the booty,

in the evening dividing the spoil.”

28] All these are the twelve tribes of Israel, and thus did their father speak to them as he blessed them, blessing each one with a blessing that befit him. 29] And he gave them a charge, saying, “When I am gathered to my people, bury me with my ancestors—in the cave that is in the field of Ephron the Hittite, 30] in the cave that is in the field of Machpelah, facing Mamre, in the land of Canaan, the field that Abraham bought from Ephron the Hittite as an inalienable gravesite. 31] There they buried Abraham and his wife Sarah, there they buried Isaac and his wife Rebekah, and there I buried Leah. 32] The purchase of the field and the cave in it was from the Hittites.” 33] When Jacob was done charging his sons he drew his feet into the bed; he then breathed his last and was gathered to his people.

50:1] Joseph threw himself upon his father; he wept over him and kissed him. 2] Joseph then charged his servants the physicians to embalm his father, so the physicians embalmed Israel. 3] When his forty days were completed—for it took the embalmers that many days—Egypt bewailed him seventy days.

4] The days of bewailing him passed and Joseph spoke to Pharaoh’s household, saying, “If I have found favor in your sight, please speak to Pharaoh and say: 5] ‘My father adjured me, saying, “See, I am about to die; in my grave that I acquired for myself in the land of Canaan, there must you bury me.” Now, then, give me leave to go up and bury my father; then I will come back.’” 6] Pharaoh said, “Go up and bury your father as he adjured you.”

7] Joseph then went up to bury his father; with him went all Pharaoh’s officials, the elders of his palace, all the [other] elders of Egypt, 8] and all Joseph’s household, and his brothers, and his father’s household. They left in Goshen only their little ones, their flocks, and their cattle. 9] And with him went the chariots and charioteers, so the camp was very numerous.

10] When they reached Goren ha-Atad on the other side of the Jordan, they held there a great and solemn lamentation; he observed a mourning ceremony of seven days for his father. 11] When the land’s inhabitants, the Canaanites, saw the mourning ceremony at Goren ha-Atad, they said, “This is a solemn mourning for Egypt,” and they called [the place] Abel Mizraim; it is on the other side of the Jordan. 12] Thus his sons did for [Jacob] exactly as he had commanded them. 13] His sons conveyed him to the land of Canaan and buried him in the cave of the field of Machpelah, the field that Abraham had bought as an inalienable gravesite from Ephron the Hittite, facing Mamre.

14] Joseph then returned to Egypt—he, his brothers, and all who had gone with him to bury his father—after burying his father. 15] Joseph’s brothers, seeing that their father was dead, now said, “Perhaps Joseph [still] bears us enmity and intends to repay us for all the harm that we inflicted upon him!” 16] So they brought a charge to Joseph, saying, “Your father left this charge before his death, saying, 17] ‘Thus shall you say to Joseph: Please, I beg of you, forgive the transgression of your brothers and their sin, though they inflicted harm upon you’; yet now please forgive the transgression of the servants of your father’s God.” Joseph wept as they spoke to him. 18] His brothers also prostrated themselves before him and said, “Here we are, your slaves!” 19] Joseph said to them, “Have no fear, for am I in place of God? 20] Though you intended me harm, God intended it for good, in order to accomplish what is now the case, to keep alive a numerous people. 21] Now, therefore, have no fear—I will provide for you and your little ones.” Thus did he comfort them and speak straight to their hearts.

22] Joseph dwelt in Egypt, he and his father’s household, and Joseph lived 110 years. 23] Joseph saw Ephraim’s grandchildren; the children of Machir, too, Manasseh’s son, were born on Joseph’s knees. 24] Joseph then said to his kin, “I am dying, but God will surely take care of you and bring you up out of this land to the land that [God] promised to Abraham, to Isaac, and to Jacob.” 25] Joseph adjured Israel’s children, saying, “God will surely take care of you; bring my bones up from this place!” 26] Joseph died aged 110 years. They embalmed him and he was put into a coffin in Egypt.