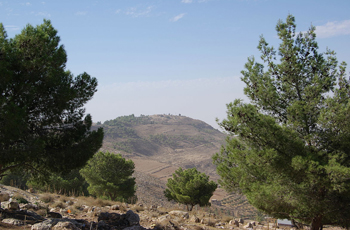 33:1] This is the blessing with which Moses, God’s envoy, bade the Israelites farewell before he died. 2] He said:

The Eternal came from Sinai,

And shone upon them from Seir;

Lightning flashing at them from on the right.

Their hallowed are all in Your hand.

They followed in Your steps,

4] When Moses charged us with the Teaching

As the heritage of the congregation of Jacob.

5] Then [God] became King in Jeshurun,

When the heads of the people assembled,

The tribes of Israel together.

6] May Reuben live and not die,

Though few be his numbers.

Hear, Eternal One, the voice of Judah

And restore him to his people.

Though his own hands strive for him,

Help him against his foes.

Let Your Thummim and Urim

Be with Your faithful one,

Whom You tested at Massah,

Challenged at the waters of Meribah;

9] Who said of his father and mother,

“I consider them not.”

His brothers he disregarded,

Ignored his own children.

Your precepts alone they observed,

And kept Your covenant.

10] They shall teach Your laws to Jacob

And Your instructions to Israel.

They shall offer You incense to savor

And whole-offerings on Your altar.

11] Bless, Eternal One, his substance,

And favor his undertakings.

Smite the loins of his foes;

Let his enemies rise no more.

Beloved of the Eternal,

He rests securely beside [God],

Who protects him always,

As he rests between God’s shoulders.

Blessed of the Eternal be his land

With the bounty of dew from heaven,

And of the deep that couches below;

14] With the bounteous yield of the sun,

And the bounteous crop of the moons;

15] With the best from the ancient mountains,

And the bounty of hills immemorial;

16] With the bounty of earth and its fullness,

And the favor of the Presence in the Bush.

May these rest on the head of Joseph,

On the crown of the elect of his brothers.

He has horns like the horns of the wild-ox;

With them he gores the peoples,

The ends of the earth one and all.

These are the myriads of Ephraim,

Those are the thousands of Manasseh.

Rejoice, O Zebulun, on your journeys,

And Issachar, in your tents.

19] They invite their kin to the mountain,

Where they offer sacrifices of success.

For they draw from the riches of the sea

And the hidden hoards of the sand.

Blessed be the One who enlarges Gad!

To tear off arm and scalp.

21] He chose for himself the best,

For there is the portion of the revered chieftain,

Where the heads of the people come.

He executed the Eternal’s judgments

And God’s decisions for Israel.

Dan is a lion’s whelp

That leaps forth from Bashan.

And full of the Eternal’s blessing,

Take possession on the west and south.

Most blessed of sons be Asher;

May he be the favorite of his brothers,

May he dip his foot in oil.

25] May your doorbolts be iron and copper,

And your security last all your days.

Riding through the heavens to help you,

Through the skies in His majesty.

A support are the arms everlasting.

He drove out the enemy before you

By His command: Destroy!

In a land of grain and wine,

A people delivered by the Eternal,

Your protecting Shield, your Sword triumphant!

Your enemies shall come cringing before you,

And you shall tread on their backs.

34:1] Moses went up from the steppes of Moab to Mount Nebo, to the summit of Pisgah, opposite Jericho, and the Eternal showed him the whole land: Gilead as far as Dan; 2] all Naphtali; the land of Ephraim and Manasseh; the whole land of Judah as far as the Western Sea; 3] the Negeb; and the Plain—the Valley of Jericho, the city of palm trees—as far as Zoar. 4] And the Eternal said to him, “This is the land of which I swore to Abraham, Isaac, and Jacob, ‘I will assign it to your offspring.’ I have let you see it with your own eyes, but you shall not cross there.”

5] So Moses the servant of the Eternal died there, in the land of Moab, at the command of the Eternal. 6] [God] buried him in the valley in the land of Moab, near Beth-peor; and no one knows his burial place to this day. 7] Moses was a hundred and twenty years old when he died; his eyes were undimmed and his vigor unabated. 8] And the Israelites bewailed Moses in the steppes of Moab for thirty days.

The period of wailing and mourning for Moses came to an end. 9] Now Joshua son of Nun was filled with the spirit of wisdom because Moses had laid his hands upon him; and the Israelites heeded him, doing as the Eternal had commanded Moses.

10] Never again did there arise in Israel a prophet like Moses—whom the Eternal singled out, face to face, 11] for the various signs and portents that the Eternal sent him to display in the land of Egypt, against Pharaoh and all his courtiers and his whole country, 12] and for all the great might and awesome power that Moses displayed before all Israel.