Night, A Memoir, by Elie Wiesel 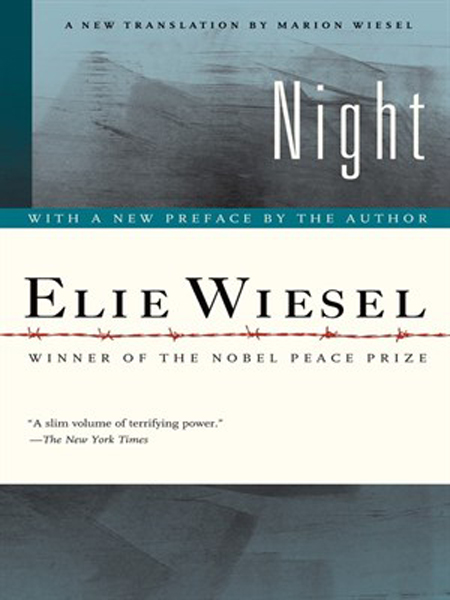 Eliezar Wiesel was born in 1928 in the small Hungarian village of Sighet, in what is today Romania. Like so many boys of his time, Elie began religious studies at an early age and spent his childhood studying Judaism, especially enjoying learning about the Jewish mystical tradition and Chasidic folktales. His father encouraged him to also study modern Hebrew and secular subjects. During this time, Elie developed his strong belief in God and deep connection to the Jewish people.

At fifteen his faith was shaken when his entire village was deported to Nazi concentration camps. In Auschwitz, Elie was separated from his mother and three sisters; only his two oldest sisters would survive. Elie remained with his father for a year, struggling to live through the camps at Auschwitz, Buna, Buchenwald and Gleiwitz. With only a few months of the war remaining, Elie’s father succumbed to the ravages of hunger and disease. After liberation, Elie was taken to a French orphanage with hundreds of other children.

As a young man, Wiesel studied at the Sorbonne, became a journalist in Paris and spent years writing for both French and Israeli newspapers. Although his Holocaust experiences were always with him, it took ten years for Elie to write of them. As he said, "I wanted to be sure that the words I was going to use about this event were the proper words." He has since written more than thirty-six books dealing with issues such as the Holocaust, Judaism and the moral responsibility to fight hatred, racism and genocide. His devotion to this agenda has influenced countless people all over the world.

Because of this dedication, Elie Wiesel has received many honors and commendations. He was appointed chairman of the United States Holocaust Memorial Council; his awards include the Congressional Medal of Freedom, the Ellis Island Medal of Honor and the Presidential Medal of Freedom. In 1986, Wiesel was awarded the Nobel Peace Prize.

Wiesel is a prolific lecturer, speaking on behalf of the many groups who suffer persecution and death because of their religion, race or national origin. He has been a visiting scholar in many universities and serves as the Andrew W. Mellon Professor in the Humanities at Boston University. In 1986, Wiesel and his wife Marion established the Elie Wiesel Foundation for Humanity to advance the cause of human rights by creating forums for the discussion and resolution of urgent ethical issues. Wiesel and his wife still collaborate on books—he writes in French and she translates into English.

Night is the quintessential Holocaust story. Told from the perspective of an adolescent, Wiesel shares his story of the time that he spent under Nazi rule. Beginning in his small village and then in four different concentration and extermination camps, Eliezer shares his experience as a religious Jewish boy whose faith in God and humanity was tested as he struggled to survive constant hunger, despair and terror of the Holocaust. Through his haunting words, Wiesel takes the reader into a world few can imagine.

The Catholic writer and fellow Nobel Prize winner Francois Mauriac finally enabled Wiesel to write his first book in the mid-1950s. After hearing Mauriac speak incessantly about the suffering of Jesus, Wiesel said to his friend, “Ten years or so ago, I have seen children, hundreds of Jewish children, who suffered more than Jesus did on his cross and we do not speak about it.” Mauriac replied: “You know, maybe you should talk about it.” It was at that moment that Elie Wiesel recognized, “To remain silent and indifferent is the greatest sin of all…” Later he noted that this memoir “was impossible to write, but impossible not to write.”

Night began as a 900-page work written in Yiddish. Even translated into French and shortened to127 pages, Wiesel had a hard time finding a publisher for it. "The Holocaust was not something people wanted to know about in those days," Wiesel reported in an interview with Time magazine. "The Diary of Anne Frank was about as far as anyone wanted to venture into the dark." Night has since been translated into thirty languages and sold over five million copies. Some of the income from these books goes to support a yeshiva in Israel that Wiesel established in memory of his father.

This new 2006 edition includes an introduction with Wiesel’s reflections on the experience of writing and living with Night and the text of his Nobel Prize acceptance speech, which offers insight into his life’s passion and work. As important, this edition is a new English translation, one closer to the intention of the original Yiddish work. With his wife Marion as the translator, Wiesel was able to not only correct some important details but also to capture more of the sense of pain, confusion and despair that he felt during this time. In this new translation, the reader understands why Night became what many consider the best of all his writings—the voice of those who survived and those who perished in the nightmare that was the Holocaust.

I. The Purpose and Reasons for Telling the Story

Telling the Tale: A Tribute to Elie Wiesel on the Occasion of His 65th Birthday - Essays, Reflections, and Poems of Elie Wiesel, Harry James Cargas (Editor). Time Being Books, 1993.

Rabbi Rachel Rembrandt was ordained at HUC-JIR,Cincinnati in 1994.